Skip to content
HomeWho’s Your Favorite Gadfly? Top 10 Blog Posts (By Me) That Enlightened, Entertained and Enraged in 2015

“Pennsylvania educator and public school advocate Steven Singer is one of the most powerful voices in the nation when it comes to speaking out for students, parents, teachers and our public schools.”
–Jonathan Pelto, founder of the Education Bloggers Network

“Steven Singer wrote these five terrific posts last year. I didn’t see them when they appeared. Probably you didn’t either. You should.”
– Diane Ravitch, education historian

“Your name should be Sweet Steven Singer. You are a delight.”
–Karen Lewis, President of the Chicago Teachers Union

Hello. My name is Steven Singer, and I am a gadfly.

I make no apologies for that. It’s what I set out to do when I started this blog in July of 2014.

I told myself that people were too complacent. There was no curiosity. People were too darn sure about things – especially education policy and social issues.

They knew, for instance, that standardized testing was good for children. Why? Because Obama said so. And he’s such a nice man. It’s too bad all those mean Republicans keep making him do all this bad stuff.

They also knew racism was over. After all… Obama! Right? Black President, therefore, the hundreds of years of struggle – finished! Move along. Nothing to see here.

Yet all this “knowledge” went against everything I saw daily as a public school teacher.

Standardized tests are good for children? Tell that to more than half of public school kids now living below the poverty line who don’t have the same resources as middle class or wealthy kids yet are expected to magically ace their assessments. Tell that to the kids who get hives, get sick, or throw up on test day. Tell it to the black and brown students who for some unexplainable reason almost always score lower than their white peers.

Racism is over? Tell that to all my minority students who are afraid to walk home from school because they might get followed, jumped, beaten or killed… by the police! Tell it to their parents who can’t get a home loan and have to move from one rental property to another. Tell it to the advertising executives and marketing gurus who shower my kids with images of successful white people and only represent them as criminals, thugs, athletes or rappers.

So when I started this blog, I consciously set out to piss people off. But with a purpose. To quote the original historical gadfly, Socrates, my role is, “to sting people and whip them into a fury, all in the service of truth.” It seems well suited to a school teacher. After all, Socrates was accused of “corruption of the youth.”

It’s been quite a year. When I went to the Network for Public Education conference in Chicago last April, some folks actually seemed to know who I was. “Don’t you write that Gadfly blog?” was a common question.

When I met NEA President Lily Eskelsen Garcia and AFT President Randi Weingarten, they both said, “I read your blog.” And then they looked me up and down suspiciously as if they were thinking, “THIS is the guy who writes all that stuff!? THIS is the guy giving me such a hard time!?”

Of course, I am human, too. One can’t sting and bite every day. Sometimes the things I write are met with love and approbation. Some weeks even Lily and Randi like me. Sometimes.

Education historian Diane Ravitch has given me tremendous moral support. I can’t tell you how gratifying it is to have one of your heroes appreciate your work! Her book “The Death and Life of the Great American School System” really woke me up as a new teacher. I’m also on the steering committee of the Badass Teachers Association, an organization that has changed my life for the better. The more than 56,000 people  there are my support. I would never have had the courage to start a blog or do half of the crazy things I do without their love and encouragement.

And there are so many more people I could thank: my fellow bloggers Jonathan Pelto, Peter Greene, Russ Walsh, Nancy Flanagan, Mitchell Robinson, and Yohuru Williams. Also the good people at the LA Progressive and Commondreams.org. The incredible and tireless radio host Rick Smith.

There are just too many to name. But no list of acknowledgment would be even close to completion without mentioning my most important supporter – you, my readers. Whether you’re one of the 9,190 people who get every new post delivered by email or if you otherwise contribute to the 486,000 hits my site has received so far, THANK YOU.

So in celebration of my first full year of blogging, I present to you an end of the year tradition – a Top 10 list. Out of the 90 posts I wrote in 2015, these are the ones that got the most attention. Often they incensed people into a fury. Sometimes they melted hearts. I just hope – whether you ended up agreeing with me or not – these posts made you think.

Feel free to share with family, friends, co-workers, etc. After all, I’m an equal opportunity gadfly. I always cherish the chance to buzz around a few new heads! 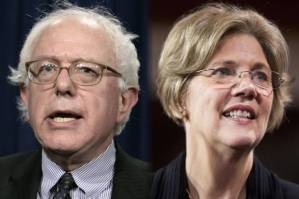 Description: It hit me like a slap in the face that almost all Senate Democrats voted to make the reauthorization of the federal law governing K-12 public schools a direct continuation of the same failing policies of the Bush and Obama years. Heroes like Bernie Sanders and Elizabeth Warren seemed to be turning their back on teachers, parents and school children. And they were stopped in their efforts by… Republicans!

Fun Fact: This story had some legs. It inspired a bunch of education advocates like myself who are also Bernie Sanders supporters to write the candidate an open letter asking him to explain his vote. His campaign eventually responded that it was about accountability!?

9) Punching Teachers in the Face – New Low in Presidential Politics

Description: New Jersey Governor Chris Christie thought he’d run for the Republican nomination for President. He thought threatening to metaphorically punch teachers unions in the face would get him votes. It didn’t.

Fun Fact: This new low in Presidential politics came just after Donald Trump had announced he was running. Christie’s new low now seems almost quaint after Trump’s calls to tag all Muslims and monitor their Mosques. How innocent we were back in… August.

Fun Fact: I have not yet been arrested for writing this piece.

–Did the AFT Rank and File REALLY Endorse Hillary Clinton for President? If So, Release the Raw Data

Description: You expect your union to have your back. Unfortunately it seems our teachers unions were more interested in telling us who we’d be endorsing than asking us who the organizations representing us should endorse.

Fun Fact: I broke this story pretty much nationwide. News organizations like Politico were calling me to find out the scoop.

6) Why We Should Have ZERO Standardized Tests in Public Schools

Description: Someone had to say it. We don’t need any standardized tests. We need teacher-created tests. And that’s not nearly as crazy as some people think.

Fun Fact: This was written back when the Elementary and Secondary Education Act (ESEA) was being rewritten and naïve fools like me thought we might actually get a reduction in high stakes testing. Spoiler alert: we didn’t.

5) Atlanta Teacher RICO Conviction is Blood Sacrifice to the Testocracy

Description: There is something terribly wrong when we’re using laws created to stop organized crime as a means to convict  teachers cheating on standardized tests. I’m not saying cheating is right, but the mafia kills people. These were just teachers trying to keep their jobs in a system that rewards results and refuses to balance the scales, listen to research or the opinions of anyone not in the pockets of the testing and privatization industries.

Fun Fact: Watching all those seasons of “The Wire” finally came in handy.

Description: How I went to my daughter’s school and demanded she not be subjected to high stakes testing in Kindergarten.

Fun Fact: They were very nice and did everything I asked. If you haven’t already, you should try it!

3) I Am Racist and (If You’re White) You Probably Are, Too

Description: White folks often can’t see white privilege. This is my attempt to slap some sense into all of us. If you benefit from the system, you’re responsible to change it.

Fun Fact: Oh! The hate mail! I still get it almost every day! But I regret nothing! A black friend told me I was brave to write this. I disagreed. Anytime I want I can hide behind my complexion. She can’t.

2) I Am A Public School Teacher. Give Me All the Refugees You’ve Got

Description: Our public schools are already places of refuge for our nation’s school children. Send me more. I’ll take them all. I’d rather they end up in my classroom than drowned by the side of a river.

Fun Fact: I got equal love and hate for this one. Some folks were afraid of terrorists. Others didn’t think we could afford it. But many told me my heart was in the right place. Lily and the folks at the NEA were especially supportive.

Fun Fact: You’d have thought I threatened some people’s lives with this one! How dare I suggest people should stop mocking other people’s names! If you want to know how strong white fragility is in our country, read some of the comments! But many people thanked me for bringing up something that had bothered them for years but that they had been too polite to talk about, themselves. This is easily my most popular piece yet.

4 thoughts on “Who’s Your Favorite Gadfly? Top 10 Blog Posts (By Me) That Enlightened, Entertained and Enraged in 2015”