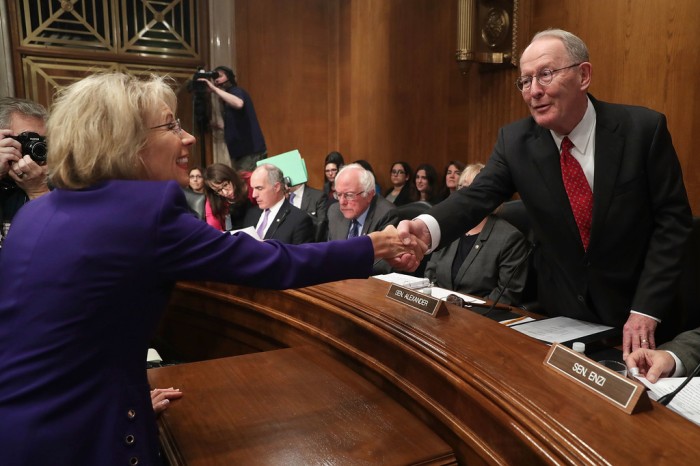 Let’s say you were kidnapped and kept in a small basement room where you were routinely beaten and starved.

Then after years of this treatment, your captors brought in a massage table and offered you a filet mignon after your spa treatment.

You’d be more than a little bit confused.

That’s the position of parents, students and teachers today.

After almost two decades of punishing public schools and their students for low test scores, Congress suddenly decides to step back and leave it to the states!?

Until now the federal government had mandated increasing high stakes standardized tests and forcing schools that don’t meet a certain threshold to be stripped of their school boards, turned into charters or simply closed. Until now, the federal government coerced states to enact every fly-by-night corporate education reform from Common Core to Teach for America to evaluating teachers based on student test scores.

But now the feds are just walking away!?

First, in 2015 lawmakers passed the Every Student Succeeds Act (ESSA), a reauthorization of federal K-12 education policy that (depending on how you interpret it) limited federal power over public schools. However, the Obama administration offered guidelines that put much of that federal power back in place.

Now both the House and Senate have voted to repeal those Obama administration guidelines in favor of… well… some other interpretation.

Sen. Lamar Alexander (R-Tennessee), chairman of the Health, Education, Labor and Pensions committee and one of the architects of the ESSA, says states can just follow what’s written in the law. But this is a 1,061 page document full of legalese, meandering bipartisan compromises and – frankly – contradictory language. Even the most simple legislation needs interpretation, and in this case it needs extensive interpretation.

Education Secretary Betsy DeVos is expected to offer her take on what all this means by Monday. So buckle up for that one. I’m sure the nation’s Grizzlies are so upset they can barely finish their picnic baskets.

As for the rest of us, it’s hard to know what this all will mean.

Alexander offered a detailed explanation that anyone interested in this issue should read.

I’m no fan of the Senator’s. I think he’s a blatant opportunist, an unapologetic partisan and out to protect only one person – numero uno.

But he makes some excellent points about federal overreach in the Department of Education under the previous two administrations.

Moreover, unlike DeVos, the supremely unqualified Education Secretary he helped ram through Congress over bipartisan objections, he knows something about schools. He was Secretary of Education, himself, from 1991-93 under President George H. W. Bush.

First, the ESSA still mandates annual testing. Even without the Obama guidelines, students will still be tested in grades 3-8 and once in high school.

Second, Alexander says the law still requires each state to hold its public schools accountable. Each state must submit a plan detailing how it intends to do that by September of 2017. There is plenty of latitude on exactly how states will do this, but whatever they decide, this new accountability system must be implemented by next school year (2017-2018).

Moreover, he says, states have to identify and provide support to at least the lowest performing 5% of their schools. This must be done by the beginning of the 2018-2019 school year.

They also must use academic and English language proficiency indicators in their accountability systems. Which indicators? Standardized testing? Maybe – maybe not.

Many accountability provisions, such as the requirement that educators measure reading scores, math scores, and graduation rates, are specifically mentioned in the ESSA.

For instance: if the Department of Education isn’t allowed to tell states what to do, how is it supposed to help them comply with the law?

Alexander stresses that repealing the Obama regulations does not open to door for the Department of Education to mandate a nationwide school voucher plan – unfortunately.

He writes, “A school choice program cannot be unilaterally created by the Department of Education. Only Congress could create a voucher program, and, unfortunately, Congress has rejected doing that.”

However, the Trump administration and DeVos have already made their intentions known about school vouchers. They intend to use Title I dollars – money usually earmarked for the most impoverished students – as federal bribes to enact vouchers. It’s basically the same thing Obama did with Race to the Top – promising federal money to states if their schools do what the feds want them to do.

For all his talk about states rights, Alexander appears to have no problems with this same kind of Obama-style coercion.

But he does appear to be correct about the transfer of power.

Apparently, the states really will regain control over their public schools.

This could be a very positive thing. And it’s not the only one.

This change was less controversial. Eight Democrats joined Republicans in voting to repeal the teacher preparation regulations. By comparison, no Democrats voted to dismantle the accountability rules and one Republican joined them in opposition.

The teacher preparation rules were released in October after years of delay.

The main point of contention was the requirement that states develop a rating system aimed at evaluating the success of their teacher preparation programs. This would have included how programs’ teachers perform based on a measure of student academic achievement. Though the final version gained some flexibility with how to determine student academic success beyond just test scores, it remained a hot mess.

Any programs that didn’t perform well on the state’s rating system would have lost access to federal grants aimed at supporting teachers who work in high-need certification areas and in low-income schools (or TEACH grants). In effect, it would have pushed for a new generation of teachers dedicated to test prep and Common Core.

And these repeals of Obama regulations – these seeming improvements just waiting for Donald Trump’s signature – are brought to us by the same people who support removing protections for trans students. These are the same legislators who gave us an unexperienced mega-donor as Education Secretary.

Frankly, I’m having trouble believing it.

I hope I’m wrong, but I’m waiting for the other shoe to drop.

Perhaps the standardized testing industry has consolidated so much support at the various Republican controlled state legislatures that it no longer needs support in Washington. Perhaps our ridiculously gerrymandered state legislative districts will make any resistance even more difficult. Perhaps a completely toothless Department of Education will embolden the most racist state legislators to dramatically increase segregation and civil rights abuses for the poor and minorities.

Or perhaps Republicans actually got one right?