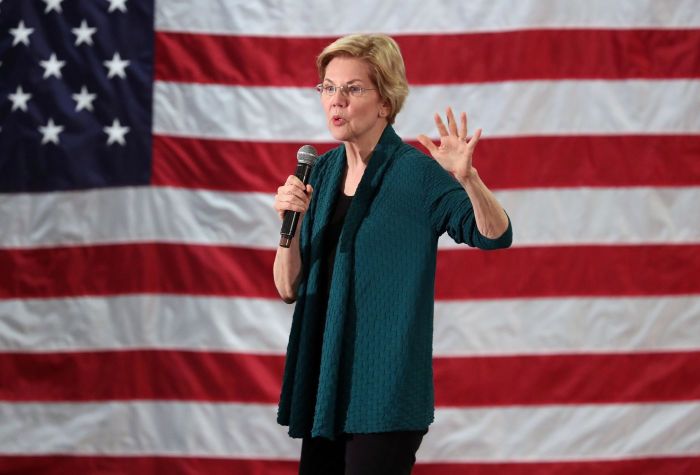 My daughter had bad news for me yesterday at dinner.

She turned to me with all the seriousness her 10-year-old self could muster and said, “Daddy, I know you love Bernie but I’m voting for Elizabeth.”

“Elizabeth Warren?” I said choking back a laugh.

Her pronouncement had come out of nowhere. We had just been discussing how disgusting the pierogies were in the cafeteria for lunch.

And she nodded with the kind of earnestness you can only have in middle school.

So I tried to match the sobriety on her face and remarked, “That’s okay, Honey. You support whomever you want. You could certainly do worse than Elizabeth Warren.”

And you know what? She’s right.

Warren has a lot of things to offer – especially now that her education plan has dropped.

In the 15 years or so that I’ve been a public school teacher, there have been few candidates who even understand the issues we are facing less than any who actually promote positive education policy.

But then Bernie Sanders came out with his amazing Thurgood Marshall plan and I thought, “This is it! The policy platform I’ve been waiting for!”

I knew Warren was progressive on certain issues but I never expected her to in some ways match and even surpass Bernie on education.

What times we live in! There are two major political candidates for the Democratic nomination for President who don’t want to privatize every public school in sight! There are two candidates who are against standardized testing!

Before we gripe and pick at loose ends in both platforms, we should pause and acknowledge this.

Both Sanders AND Warren are excellent choices for President. And Biden might even do in a pinch.

So in honor of my precocious political princess backing Elizabeth Warren – I THINK she knows she doesn’t actually get to vote, herself, yet! – I give you eight things I love and one I don’t in Warren’s education plan.

WARREN’S PROPOSAL:  Quadrupling Title I funding — an additional $450 billion over the next 10 years for the neediest children and their schools. Finally have the federal government pay 40% of all special education costs – a promise lawmakers made years ago but never kept. Invest an additional $100 billion over ten years in “Excellence Grants” to any public school. That’s roughly $1 million for every public school in the country to buy state-of-the art labs, restore afterschool arts programs, implement school-based student mentoring programs, etc. By 2030, she’ll help 25,000 public schools become community schools. Invest at least an additional $50 billion in school infrastructure — targeted at the schools most in need.

WHAT I LIKE: Everything! Our public schools are crumbling under decades of neglect and targeted disinvestment – especially those serving the poor and minorities. This could be a game changer for the entire country!

WARREN’S PROPOSAL: Spend billions of dollars annually that states can use to promote residential and public school integration. This includes infrastructure like magnet schools but also integrating communities. Support strengthening and robust enforcement of Title VI of the Civil Rights Act of 1964. This prohibits discrimination on the basis of race in any program receiving federal funding.

WHAT I LIKE: Segregation is the elephant in the room in our nation. We can’t be a single country pursuing liberty and justice for all when we keep our people “separate but equal.” If you want to undo our history of racism, prejudice and xenophobia, we must get to know and appreciate each other from a young age. Plus it’s harder to horde resources for one group or another when all children are in one place.

WHY I LIKE IT: I love my students – all of my students. It breaks my heart that the same system that’s supposed to provide them an education oftentimes allows them to be discriminated against.

“The push toward high-stakes standardized testing has hurt both students and teachers. Schools have eliminated critical courses that are not subject to federally mandated testing, like social studies and the arts. They can exclude students who don’t perform well on tests. Teachers feel pressured to teach to the test, rather than ensuring that students have a rich learning experience. I oppose high-stakes testing, and I co-sponsored successful legislation in Congress to eliminate unnecessary and low-quality standardized tests. As president, I’ll push to prohibit the use of standardized testing as a primary or significant factor in closing a school, firing a teacher, or making any other high-stakes decisions, and encourage schools to use authentic assessments that allow students to demonstrate learning in multiple ways.”

WHY I LIKE IT: High stakes testing is a curse on the education field. It warps nearly every aspect of our school system with biased and inappropriate assessments. Good riddance!

5)       IT SUPPORTS FEEDING ALL STUDENTS – NOT SHAMING THEM FOR THEIR POVERTY.

“I will also push to cancel all existing student meal debt and increase federal funding to school meals programs so that students everywhere get free breakfast and lunch.”

WARREN PROPOSES: Providing funding for schools to increase pay and support for all public school educators, strengthen the ability of teachers, paraprofessionals, and staff to organize and bargain. In particular:

“I pledged to enact the Public Service Freedom to Negotiate Act, which ensures that public employees like teachers can organize and bargain collectively in each state, and authorizes voluntary deduction of fees to support a union.”

WHY I LIKE IT: A robust system of public education needs teachers who are respected and appreciated. You cannot have this when salary is based on the wealth of the community you serve. The only choice as far as I see it is to have the spender of last resort (the federal government) take up the slack. I know some of my fellow bloggers are nervous about this because these funds could come with strings attached. Pay could be contingent on teachers increasing student test scores or using certain corporate curriculum, etc. However, any tool can be misused. I don’t see this as necessarily being a backdoor for corporate shenanigans, but we certainly must be cautious.

WARREN PROPOSES: Ensuring charter schools are subject to at least the same level of transparency and accountability as traditional public schools. In particular:

“…I support the NAACP’s recommendations to only allow school districts to serve as charter authorizers, and to empower school districts to reject applications that do not meet transparency and accountability standards, consider the fiscal impact and strain on district resources, and establish policies for aggressive oversight of charter schools.”

WHAT I LIKE ABOUT IT: Everything! This is where Warren’s proposal really shines! She is even more comprehensive than Sanders’! She doesn’t stop with just “for-profit” charter schools but understands that many of these institutions circumvent the rules even without that tax status.

8)       IT PROTECTS STUDENT DATA FROM ED TECH COMPANIES AND BEYOND.

WARREN PROPOSES: Banning the sharing, storing, and sale of student data. In particular:

“My plan would extend the Family Educational Rights and Privacy Act (FERPA) to ban the sharing, storing, and sale of student data that includes names or other information that can identify individual students. Violations should be punishable by civil and criminal penalties.”

WHAT I LIKE ABOUT IT: Ed tech companies are seen for the danger they bring to education. Students are protected from having their entire lives impacted by the choices of ignorant school administrators or school directors. The road to the replacement of public school with digital alternatives is recognized and blocked.

And this just scratches the surface. These are just the points that jumped out at me on a first read.

I’m sure there is more policy gold in here we’ll find as the election season progresses.

However, there was one thing that jumped out at me in a less positive light.

1)      WARREN’S EMPHASIS ON “CAREER AND COLLEGE READINESS” SOUNDS TOO MUCH LIKE THE WORST OF BARACK OBAMA’S EDUCATION POLICY.

On the one hand, Warren says unequivocally that she’s against high stakes testing. Then on the other she writes:

“We must also ensure that students are able to take advantage of those opportunities and that high schools are funded and designed to prepare students for careers, college, and life…

…I’ll work with states to align high school graduation requirements with their public college admission requirements. And I’ll also direct the Department of Education to issue guidance on how schools can leverage existing federal programs to facilitate education-to-workforce preparedness.”

This sounds an awful lot like Race to the Top and Common Core.

Warren needs to understand that Common Core cannot be separated into curriculum and testing. The testing drives the curriculum. You can’t say you’re against testing being used to make high stakes decisions and then have that same testing determine what is taught in schools.

Perhaps this isn’t her intention at all. But she needs to be asked and she needs to give a definitive answer.

Obama was all about teacher autonomy, too, before he got into office.

And that’s really the biggest issue for most education advocates like me.

We’ve been burned so many times before by politicians, it’s hard to accept that any of them might actually be serious about doing something positive for children’s educations.

But Warren has gone a long way with this proposal to getting me into her corner, too.

In the primary, I’ll probably continue to feel the Bern.

But who knows? In the general election, perhaps my daughter and I will get to root for the same candidate.

I’m extremely thankful to Warren and her team for coming up with such a thoughtful and detailed education plan. It couldn’t have been easy – either to draft or politically.

It really does appear to be an attempt not just to sway voters but to actually get things right.

Here’s hoping that voters do the same in about a year.