Skip to content
HomeGo Ahead, SCOTUS. Rule Against Unions in Janus Case. You’ll Only Make Us Stronger

The corporate owned far right has been trying to destroy labor unions for decades.

But this time they may have finally overplayed their hand.

The upcoming Janus v. AFSCME Council 31 case set for a ruling by the U.S. Supreme Court on Feb 26 has been billed as the final nail in the coffin for public sector unions.

With the pitifully weak Democrats giving up President Obama’s pick for the bench in favor of Trump’s absurd choice, Neil Gorsuch, the court has a decidedly conservative bias.

So court watchers expect the latest challenge to collective bargaining rights to come out in favor of the corporations and billionaires who have spent truckloads of money to ensure the little guy has less of a say in the workplace.

BUT! They aren’t taking into account how stupid these far right shills truly are!

The case comes down to this: some people working in a union job don’t think they should have to pay union dues even though they benefit from the contract negotiated by their union. They affirm that being part of a union is political speech and thus they cannot be compelled to pay – yet somehow they should be able to keep all the benefits of being in a union, anyway. 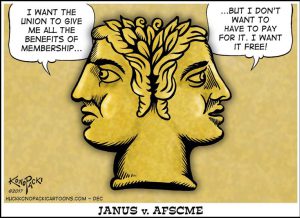 So the union gets me a raise and better healthcare, but – even though none of my dues go to pay for political campaigns (that money is donated separately and voluntarily) – just being in a union is a political act.

If the court rules in favor of this position, unions would no longer be able to compel members to pay dues.

Pay them, don’t pay them – there’s nothing the union could do.

Conservatives are betting that if dues become voluntary on a person-by-person basis, at least a few members will opt out and thus weaken union finances and ability to collectively bargain for everyone.

But what they don’t seem to understand is that a decision like this would overturn decades of established law.

It would overturn mountains of legal decisions that provide the foundation for how our government works.

In short, how many times are we compelled to pay for things we don’t necessarily believe in?

How much of my tax dollars go to the military? What if I don’t want my taxes used to pay for a bloated war machine?

How much of my hard earned money is wasted on corporate subsidies? What if I don’t want to prop up huge multinational businesses already making record profits?

How much of my money go to privatized schools? What if I’m against charter and voucher schools and want my taxes instead to fund fully public schools with elected boards, transparency and who have to accept all students regardless of ability?

If the court rules against unions, then I guess I won’t have to pay my taxes anymore – or at very least, I will have to be given the option of where my tax dollars go.

Not just SOME of my tax dollars – every single penny on a line-by-line basis for every single tax payer in the United States!

An Illinois based engineering union wrote in detail about exactly how such a ruling would change the landscape. Operating Engineers Local 150, wrote on their blog titled, “Union Busters Set Themselves Up for Janus Backfire”:

Shaun Richman, a former organizing director for the American Federation of Teachers, agrees.

In an article for In These Times called “How A Supreme Court Decision to Gut Public Sector Unions Could Backfire,” he writes:

“The ruling could both wildly increase workers’ bargaining power and clog the lower courts with First Amendment challenges to routine uses of taxpayer money. At a minimum, it has the potential to turn every public sector workplace dispute into a constitutional controversy…”

Frankly, this is kind of exciting.

In trying to stifle workers’ free speech, conservatives may unravel the statutes that have muzzled us for years.

A decision against unions by the Supreme Court would open the way for thousands of cases throughout the court system – challenge after challenge. Certainly conservative justices would try to staunch the tide, but they simply couldn’t stop every case – especially after such a dangerous precedent has been set!

The SCOTUS would be unleashing chaos on the justice system, and I, for one, hope that every workers union takes advantage of it.

Meanwhile, those workers unions that conservatives are hoping will be destroyed will be just fine.

You think workers won’t pay their union dues? Some might try, but doing so will have immense personal ramifications. At very least, it will make those individuals social pariahs. Who wants to associate with someone who thinks they should get all the benefits without paying like everyone else?

Moreover, I don’t advocate violence against anyone, but stiffing your co-workers on your union dues is a sure fire way to get slashed tires. Do you put your lunch in a communal fridge? I wouldn’t eat that after word gets out you’re a free rider. Not unless you like to share your co-worker’s saliva.

Again, I’m not advocating for any of that, but it’s just the way humans behave. We don’t like paying for any other able-bodied person whose “political” decision puts our lives and livelihoods in jeopardy.

The end result of a ruling against unions would forever put collective bargaining rights firmly under the protection of the First Amendment.

It would protect all speech – including union rights.

So I say, go ahead, SCOTUS, make our day!

3 thoughts on “Go Ahead, SCOTUS. Rule Against Unions in Janus Case. You’ll Only Make Us Stronger”