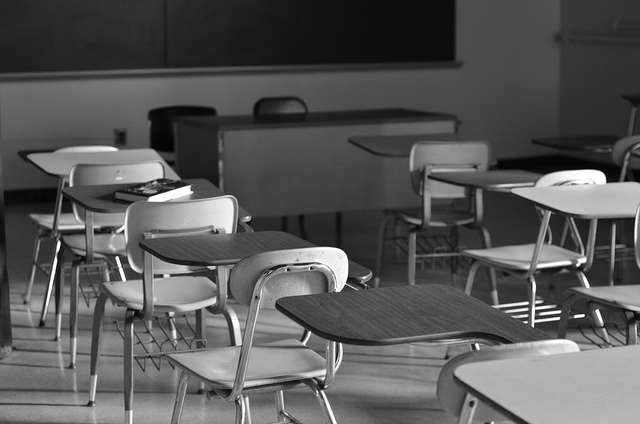 It could happen at anytime in my classroom.

The thing we’ve all been dreading.

A hasty announcement of lock down. An unexpected fire alarm. The sounds of shouting, running feet and… gunshots.

The lights could go out. The door could burst in.

There’s really very little we could do.

My room has no windows. No closets. Nowhere to hide.

These are the thoughts going through my head as my students sit at their desks during homeroom this morning.

Jayden is taking off his hoodie before the principal catches him out of dress code.

Alaina is pestering me for a pass to the library.

Darnell is surreptitiously munching on a pixie stick stashed in his book bag.

It’s all so mundane, so subdued, so quiet.

A few kids are on the computers in the back, others at their desks reading books, writing papers, or listening to music on their iPads.

The class of middle schoolers is restrained, thoughtful – which is unusual for children of 12 or 13.

I sit slumped at my desk – exhausted though I haven’t even taught my first class yet.

The news from last night still plays in my head.

Seventeen people killed by an expelled student at a high school in Parkland, Florida.

Or was it two killed in Kentucky?

How long was it since the last one?

And now here we are – back in the line of fire.

I can’t help but think about my daughter somewhere across town. She’s probably just entering her third grade classroom maybe munching on the remains of a candy heart from Valentine’s Day. Just like me and my students, she’s in the cross hairs.

But what can we do about it?

I can’t hold her out of school forever. I can’t quit my job and work from home. Even if I could, there’s absolutely nothing I can do for the twenty children quietly sitting at their desks in the room with me, abiding the rules of a society too broken to protect us.

After last night, it feels like things have changed somehow.

There have been 18 school shootings so far this year. And it’s only February. Most have resulted in zero injuries.

Of those where people were hurt, the person most in danger was the shooter. But I can’t stop thinking about those cases where a hunter came to school to kill children and teachers.

As an educator, I’ve been taught how to handle just about every situation.

If one of my children acts out, or doesn’t hand in her homework, or even throws up – I know what to do.

But none of my training has prepared me to out teach a semiautomatic weapon.

I can’t differentiate past a bullet.

There is no paperwork that will invalidate the gunpowder or slow the endless rounds through whatever they come into contact.

If someone comes to school with a gun and a will to kill, I will be little more than a target.

But don’t get me wrong.

This doesn’t mean society should gift me a handgun to keep in my desk next to the chalk.

I am not a law enforcement officer or an action hero. I’m a teacher.

You don’t want me returning fire at every mindless bureaucratic hitch in the schedule. You want me assigning essays and chapter readings. You don’t want me keeping a gun out of reach of curious youngsters always at my desk and in my personal space. You want me safeguarding student assignments and – heck – my cell phone that kids keep trying to snatch and look through my camera roll.

What we need is real gun control legislation.

We need an assault weapons ban.

We need to close the gun show loophole.

We need buyback programs to get the mountains of firearms off the streets and out of the arsenals of a handful of paranoid “survivalists”.

In short, we need lawmakers willing to make laws.

We need legislators who will represent the overwhelming majority of the public and take sensible action to protect the people of this country.

What we don’t need are the trolls who hijack every conversation arguing the semantics of the term “assault rifle” or “terrorist.”

We don’t need weak politicians cautioning against “politicizing” mass shootings because the violence is too fresh.

And we need it yesterday.

Some people are calling on teachers to take action to force our lawmakers to finally do something.

They suggest a national teachers strike on May 1st – May Day – if Congress refuses to act.

But we need more than that.

We need everyone who feels the same way to join in the fight.

Parents, children, grandparents, principals, police, firefighters, soldiers and nurses – the multitudinous faces of America must come together to fight this monstrosity as one.

I may sit in that classroom.

My students and my daughter may be in danger.

But America must be the shield.

America must rise up and protect our future.

WE must take charge.

Otherwise, it is not a case of can it happen here.

It is a case of when.

18 thoughts on “When Will It Happen Here?”