Skip to content
HomeWe Are All Chicago Schools – More Layoffs, Less Help for Other People’s Kids 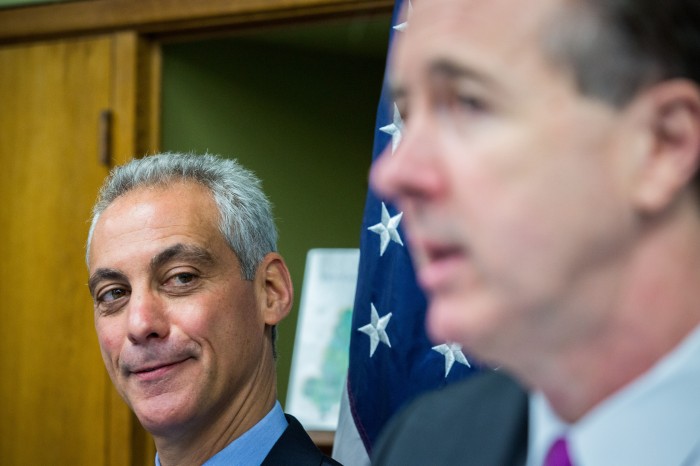 Mayor Rahm Emanuel couldn’t have been clearer if he’d said the above.

Chicago Schools Chief Executive Forrest Claypool couldn’t have made his priorities clearer if he’d given Chicago’s parents the bird and told them to “Kiss my ass.”

The Chicago Board of Education – made up of members all of whom are appointed by the mayor – decided to layoff 1,000 teachers and staff at the city’s public schools just a month before opening day. Sure, some may keep their jobs through reassignment, but hundreds will be unemployed.

This after a recent history of closing more than 80 schools and slashing thousands of jobs. Just last February, the district laid off 62 employees, including 17 teachers. In January, it laid off 227 staff members.

This begs several questions: How many teachers and support staff can Chicago Public Schools afford to lose? What exactly is this doing to its students? How is it affecting their future prospects to be taught by a skeleton crew?

The city’s leaders don’t give a shit.

And why should they? These aren’t their kids!

And the worst part is that it’s not necessary. Chicago doesn’t have to continue to abandon its neediest children.

When you’re in a family, you make sacrifices for your kids. If funds are tight, you make cuts elsewhere or maybe you even take another job. Anything to make sure you’re providing your children with the best.

But Chicago’s leaders aren’t interested in doing any of that for these kids because they just don’t care.

Otherwise they could find the money. The teachers union suggests declaring a TIF surplus and reinstating a corporate head tax. The city isn’t exactly a wasteland. Wealthy developers are looking to build yet Emanuel has no intention of inconveniencing them by making them pay a fair share of taxes. Instead, the full burden falls on the city’s working families. And he calls himself a Democrat!

There’s always enough money for projects leaders care about. For instance, there was no problem finding $250,000 to pay a law firm where Claypool and his handpicked general counsel, Ron Marmer, both formerly worked. Marmer still has financial ties to the firm! So cut a check to Jenner & Block LLP? YES! Ensure kids have all the teachers they need? HECK NO!

Strangely there’s $27 million hiding in the seat cushions to open a new charter school for the University of Chicago. The Woodlawn Campus of the University of Chicago Charter School will be part of the development around the newly-planned Obama Library. It’s a fitting symbol of the President’s legacy – a brand new privatized educational facility while a few blocks away traditional public schools molder in ruin.

Meanwhile, Gov. Rauner holds the state education budget hostage. Illinois lawmakers could only agree on a 6-month state budget in June. Republicans expressed concern about the state being responsible for bailing out Chicago Schools. It’s not our problem, they seem to think. Well of course not. These aren’t your kids.

It’s the same swindle we see throughout the country. Refuse to pay for public schools – especially the schools serving poor brown kids, and then shrug. “Look at the impasse,” they shout, hoping voters are too stupid to realize it’s an impasse created by these lawmakers, themselves! It’s a textbook disaster capitalism move, approved by the American Legislative Exchange Council (ALEC) and other conservative think tanks. But Rauner can at least be forgiven for being a proud Republican. This is, after all, the behavior progressives expect from GOP lawmakers.

Some might say it’s just Emanuel. After all, for a Democrat he sure pals around with a lot of conservatives. He and Rauner are best buddies. When Emanuel earned his fortune, he was an investment banker, and one of his best clients was Rauner. They go out to dinner and even spend vacations together. Sure they occasionally criticize each other in public, but behind closed doors the ideological differences just melt away.

What about the rest of the Democrats? Surely they don’t agree with Emanuel’s tactics. They made sure to keep him away from the Democratic National Convention – out of sight, out of mind.

But if the party is really so opposed to these policies, where is the condemnation from party leaders?

I haven’t heard a peep from the Democratic nominee for President, Hillary Clinton, about these layoffs. Have you? She’s the de facto leader of the party and she’s got nothing to say about this. What does that tell you about her priorities?

Sure she’s cozied up to the two biggest national teachers unions who liked her so much they didn’t even need to consult the rank and file before endorsing her in the primary. Ronald Reagan had the support of the Professional Air Traffic Controllers Organization (PATCO) right up until he declared their strike illegal and demanded they return to work. Will Clinton, too, turn against union teachers once she’s used them for their vote in November?

We have to get beyond labels like Republicans and Democrats, liberals and conservatives. Almost all of them are neoliberals. They all believe essentially the same things.

And as proof I offer the deafening silence offered against Emanuel in Chicago.

But no one in power gives a fuck.

6 thoughts on “We Are All Chicago Schools – More Layoffs, Less Help for Other People’s Kids”