Skip to content
HomeI Used to be a Reporter. Now I’m a Teacher. I’ve Become What I Used to Observe 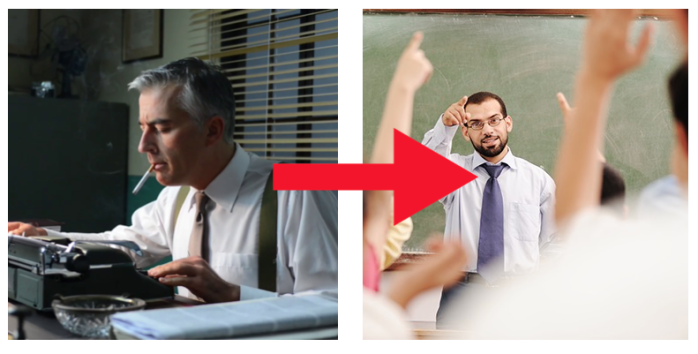 A long time ago, in a newsroom far, far away; your humble narrator was a respected journalist.

Today I am a beloved school teacher in a suburban middle school.

Okay. That may be laying it on a bit thick.

Like any human being whose job it is to get children to do their best and learn something, I’m beloved by some and beloathed by others. And if I’m honest, when I was a reporter, I was never all that respected. But I did win several state journalism awards.

The point I’m trying to make is that like a caterpillar into a butterfly or a tadpole into a frog, I made a startling transformation in career paths that flies somewhat in the face of popular wisdom.

F. Scott Fitzgerald wrote, “There are no second acts in American Lives.” Well, I’m on my third or fourth act and nowhere near ready for the curtain to come down yet.

It’s shocking how far I’ve come, though there’s a surprising amount of overlap between my two professions. In fact, the biggest difference is one of orientation.

I used to get up at 4 a.m., weave into the newsroom and type away for a few hours about the previous night’s school board or city council meeting before my deadline came down, the presses rolled and the morning edition went on sale.

Now I get up at 5 a.m., hobble into the classroom and go to meetings, grade papers or otherwise get ready for a 7-hour invasion by 12- and 13-year-olds, followed by more meetings and papers and planning.

I used to go into the classroom to interview teachers and students about special lessons, state and federal programs or standardized tests.

Now I’m in the classroom questioning myself about my students and what works best to help them learn, trying to navigate the state and federal programs so they get the best return and bang my head against the wall about the constant standardized tests.

I used to independently bebop all over my coverage area, asking questions, doing research, discovering things that many people would rather remain secret.

Now I independently plan my lessons, ask my students questions, do research on best practices and discover things about my children and their lives that many people would rather remain secret.

You’ve heard the old chestnut about education being a career for those unable to act. I’m living proof that it’s a lie.

As a journalist, I reported on. As a teacher, I do.

In my former job, I told. In my current one I show.

Perhaps that’s why I now find it so strange that many of my former colleagues have gone into public relations, communications or have become policy analysts.

I’m not surprised. I can’t say I didn’t know that that door was always open. But it’s peculiar.

In the newsroom, we all heard the stories about grizzled newspapermen and women with shelves stuffed full of awards and prized Rolodexes bursting with hard-earned sources who gave it all up for a 9-5 desk job writing the very press releases we disdained.

We all had friends who were making bank managing people like us and trying to get us to write what the company wanted or spin the story in the direction the advertisers liked.

There is no scorn, no disgust, no derision to match that of a journalist for a corporate sellout, and that’s because in our hearts we all secretly wondered if it wasn’t the better deal.

Every good reporter – like every good teacher – is a radical at heart.

You don’t get into either field to support the status quo. You want to rock the boat. You want to shake things up. You want to change the world for the better – all from the comfort of your swivel chair behind your computer screen or from the well worn tread of your classroom carpet.

Journalists live for the scoop, the big story, the article that shouts off the front page above the fold and which has everyone talking. Teachers live for the student epiphany, the moment the light comes on behind a child’s eyes, the transformation from ignorance to knowledge and – dare I say – wisdom.

But being a press agent or policy hack has none of that splendor.

You have to give it up – all for the right to have a chance at a life.

I loved being a reporter. It was one of the best things I’ve ever done. I got to do things, see things, talk to people, be there for things that I never would have been able to access otherwise. But I could barely pay my bills.

I was dirt poor in the newsroom. We all were.

So I understand the allure of the steady paycheck and becoming a housebroken professional communicator of someone else’s message.

But being a teacher is different.

You still don’t get paid much. You still work long hours – though maybe not quite as long. But you can get that second job – often in the school, itself, tutoring students or in a summer or after school program.

And you get union protections that I only dreamed about as a reporter. A safe workspace, clean and tidy, no outrageous demands (or at least an upper limit on them), and a schedule you can predict and plan a life around.

Best of all, you still get to keep your idealism intact. Or you can try to keep it as you dodge this directive and that unfunded mandate and that deeply racist policy passed down from above.

Don’t get me wrong. Becoming a teacher was hard work. I didn’t go about it the easy way – no Teach for America, one-foot-in/one-foot-out, cheating for me. I dove in head first.

I went back to college and took an intensive, accelerated masters program designed exactly for people changing careers. To get there, I had to swallow a few prerequisites I’d missed in college the first time. Then they placed me in a high school where I watched and then took over multiple classes – all while enrolled in education courses at night and in the summers.

By the time it was all over, I still had the most important things left to learn – (1) whether I could actually teach a full schedule, and (2) whether I liked doing so.

For me, the answers were unequivocally positive. I took to it like I’d taken to journalism. I needed lots of fine tuning, but the basics came naturally. And I loved every exhausting minute of it.

I regret nothing about becoming a teacher. It’s the best job I’ve ever had and am ever likely to have.

As a journalist, I got to rock whole communities with exposes about corruption. As an educator, I get to impact individuals.

I no longer get to be the talk of the town, but I get to change lives all the same – one person at a time.

And there’s something deeply satisfying about it – to look in another person’s eyes and see the need right there in front of you, and to be able to heal it even a fraction of the way well.

This world is hard. It takes people, chews them up and spits them out. There is so rarely a helping hand, a smile, understanding. But to be able to offer your hand, to be able to share a smile, to attempt to understand – that’s pure magic.

When the day is done, I know it was well spent.

I’ve come a long way from the newsroom. And in doing so, I’ve broken journalism’s number one rule – don’t become the story.

I no longer report on the action.

I participate in it.

What a way to make a living!

6 thoughts on “I Used to be a Reporter. Now I’m a Teacher. I’ve Become What I Used to Observe”