Most people agree that the best way to get kids to read isn’t by threatening to take away their lunch.

But an Arkansas state Representative is threatening to do just that – sort of.

However, he’s not proposing we take away kids’ food.

If passed, the bill would reduce a district’s National School Lunch funding – a state mechanism that distributes extra resources to schools with high concentrations of students who qualify for free lunch programs – if student test scores don’t rise over a period of time. This would cut things like professional development and tutoring.

However, this has been confused with the federal program of the same name and drawn almost universal condemnation.

“I would never starve kids,” Clark said. But he would starve their schools of resources.

Either way, his proposal is obviously unfair.

Only a monster would think you can incentivize reading comprehension by threats and coercion.

It’s like saying “You’d better understand this complex puzzle OR ELSE!”

But Clark sees things from a different perspective – that of business and industry. He told KTHV, a state television network:

“In most businesses I would be laughed at for suggesting such a small goal. But sadly many educators act like I have asked them to storm the beaches at Normandy… It appears I have much more faith in our schools than many of our educators do.”

This is what happens when you elect people without empathy or intelligence to public office.

I wonder if Clark would do a better job representing the people of his state if they threatened to lower his salary based on his popularity polls.

It says a lot about us that people react so viscerally to the inaccurate idea that Clark is suggestion we withhold food from bad test takers. That’s unthinkable. But it isn’t really that much more cruel than the way we actually treat students.

Our entire federal education policy is based on just such inhuman treatment of children.

After all, we still hold kids, schools and teachers “accountable” by student test scores. The consequences though aren’t an empty belly. They’re crowded classrooms and fewer tutors.

In every state of the union, students are required to take high stakes standardized tests in reading and math. If they don’t do well, we take away their resources.

Sure, we don’t deny them food, but we deny them many other things they need to learn.

We lower funding to their schools so that they have larger class sizes, fewer teachers, narrowed curriculum, etc. We threaten to withhold their diplomas and any chance of ever earning more than minimum wage. In many cases we tie teachers salaries, reputations and even employment to these same scores. Sometimes we even take away their parents right to govern their children’s schools so that all administrative decisions are made by state flunkies. Or we force their authentic public schools to become charter institutions so that spending decisions happen behind closed doors without accountability and even whether a student can enroll or not becomes a decision of the private management company and not simply something that is the students’ by right of living in the district.

It may not be as severe as the idea of Test Scores for Food, but it’s the same in kind.

In both cases, we tell kids – “Increase test scores, OR ELSE!” It’s just a difference of consequence.

Call me crazy, but that’s nearly as cruel and wrongheaded.

Keep in mind, all of this takes for granted that standardized tests are adequate and fair assessments of student learning in the first place. This has never been proven. In fact, it has been cast in serious doubt after more than a century of academic study. Ask anyone to narrow their thinking down to four prepackaged choices and you’ll find them trying to guess what the test-maker wanted more than what the truth is. Critical thinking, analysis, innovation – these escape any multiple choice exam.

But even if we go with this empty assumption, it flies in the face of everything we know about the way human beings acquire knowledge and demonstrate skills.

When kids struggle with learning, you can’t get them to do better with threats. Or at least you can only do that if those children are doing poorly on purpose.

Kids who just aren’t trying hard enough might be incentivized by threats. But even then it transforms learning into a means to an end. Once you do that, you destroy their natural curiosity. Learning will never again be an end in itself. It will be a menial task you only do to get something else that you really want.

However, in most cases kids don’t struggle because they’re just lazy. They don’t need an incentive. They need help. They need resources.

And what do we do when that happens? We take away the meager resources they have!

If a teacher tried any of this crap in her classroom, she’d be fired for dereliction of duty – and she’d deserve it!

Just imagine if you told the kids who were struggling in your class that they didn’t deserve tutoring. Instead you were going to give extra help to the kids who got the best scores on the exam!

And if the struggling children continued to do poorly, you took away their desks. Now they had to sit on the floor!

THIS is the kind of thing we’re doing to our children nationwide.

Moreover, it’s supported by both Republicans and Democrats alike.

We may not be  denying poor kids a meal, but we are denying them an equal opportunity at an education just the same.

It’s way past time that we wake up and see that.

We can point and jeer at what we thought this regressive Arkansas nitwit was doing, but we’re really pointing and jeering at ourselves.

NOTE: An earlier version of this story – like many in the state and national press – wrongly suggested that Clark wanted to withhold lunches from poor children based on test scores. 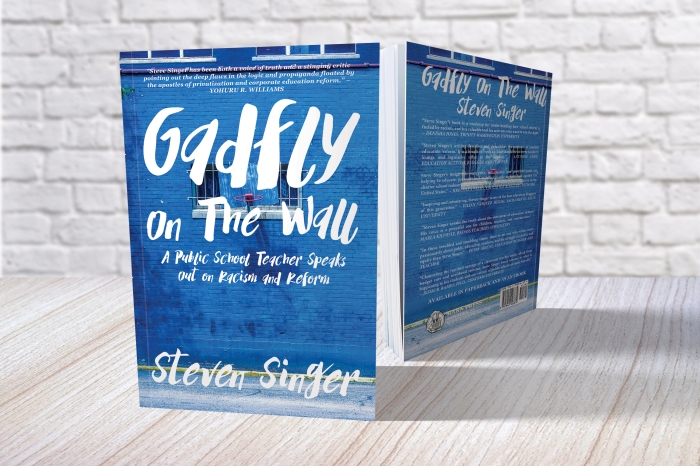