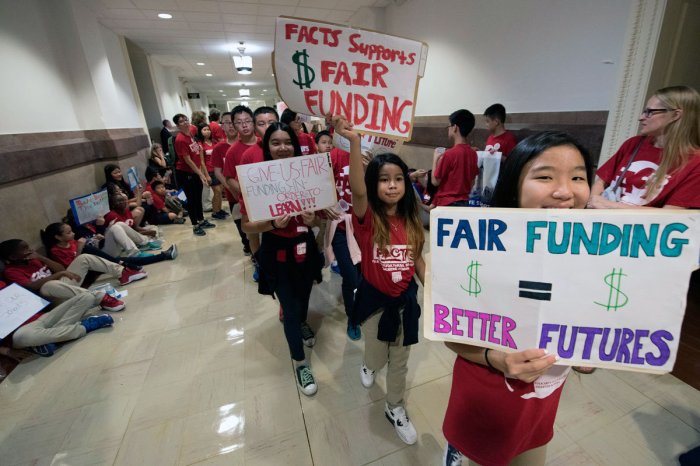 Two years ago a group of plucky Pennsylvania public schools took the state legislature to court because the body wasn’t allocating funding to all districts fairly – some got too much, many got too little.

A lower court threw the challenge out saying it wasn’t the court’s job to tell the legislature how to legislate. But now the state Supreme Court has overturned that lower court decision.

In effect, justices are saying – Hell, yes, that is the court’s job! That’s why it’s called a system of checks and balances, Baby!

Before going any further, there are a few pertinent facts you have to understand about the Commonwealth.

1) No other state in the country has a bigger gap between what it spends on rich vs. poor students than Pennsylvania, according to the U.S. Department of Education. 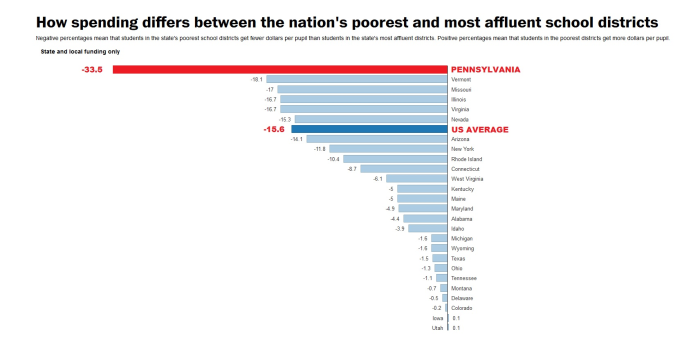 2) The Pennsylvania legislature has been paying less and less of public schools’ budgets over the last four decades. The state used to contribute 54% of all public school costs in the early 1970s. Today it pays only 35% of the costs, leaving local taxpayers to take up the slack. Since districts are not equally wealthy, that increases the disparity of resources between rich and poor districts.

3) The state has only had a funding formula specifically legislating how to allocate money to its more than 500 districts for two years. Two years! For more than 15 years previous, the legislature just handed out money willy nilly based on political backroom deals that favored already rich districts and hurt the most impoverished ones.

4) The new funding formula still is not fair. Though it does take into account the poverty of a district, it doesn’t account for the years of systematic disinvestment the district suffered through previously. That’s like giving new sneakers to a racer who hasn’t been able to get out of the starting gate while others are already halfway to the finish line.

5) The legislature STILL hasn’t healed almost $1 billion in education cuts made under previous Republican Gov. Tom Corbett. Instead, under current Democratic Gov. Tom Wolf, it has reluctantly increased funding a bit at a time but failed to bring spending up to what it was four years ago. And even once the cuts are healed, spending will be behind inflationary and cost of business increases. Meanwhile the Republican controlled legislature plays games approving the state budget separately from allocating money to the programs – including schools – that it already approved!

6) Pennsylvania is one of seven states with a Constitution that specifically requires the state provide a “thorough and efficient” system of education. Some of these other states – like New Jersey – have used similar Constitutional requirements to force their legislatures to increase state funding to public schools.

So there you are.

Pennsylvania’s legislature is an absolute mess.

Hopelessly gerrymandered, controlled by the radical right, and opposed by a Democratic party nearly as beholden to big donors as their GOP counterparts and desperate for any area of bipartisanship so as to be able to claim they got anything done other than stop Republicans from burning the whole place to the ground.

That’s why today’s 5-2 Supreme Court ruling is a breath of fresh air.

It’s like someone finally called Mom and Dad to tell our bratty lawmakers to get back to work.

The case will now go back to Commonwealth Court.

Supreme Court Justice David Wecht wrote that the courts do have a responsibility to check the power of the legislature – both in regard to the requirements of the state Constitution and that poorer districts are being discriminated against.

“It remains for (the) petitioners to substantiate and elucidate the classification at issue and to establish the nature of the right to education, if any, to determine what standard of review the lower court must employ to evaluate their challenge,” Wecht wrote. “But (the) petitioners are entitled to do so.”

This may be a Herculean task for those suing the state. And it seems unlikely that Commonwealth Court will hear their arguments favorably.

Justices rarely have the courage to challenge other branches, and the history of Pennsylvania’s courts shows multiple times when the courts have simply refused to assert such power.

This is what happened back in the 1990s when the Philadelphia School District sued the state over the same issue – unfair funding.

Time and again, poor districts have asked for help from the courts when the legislature refused to do its job. And time and again the courts have refused.

But at least this ruling gets things moving again. It’s like a dose of Kaopectate for a constipated political system.

When Philadelphia sued the state, the courts refused to rule in the schools favor because it had no way of proving the state was hurting the quality of education students were receiving there through lack of funding. But that was before Pennsylvania adopted its new Common Core look-a-like standards, PA Core, and initiated aligned tests including the souped up Pennsylvania System of School Assessments (PSSA) and Keystone Exams.

Ironically, the same “accountability” measures used to “demonstrate” poor schools are failing could be used to prove the common sense notion that unfairly funding schools leads to poor academic results.

In any case, far right demagogues like House Speaker Mike Turzai, R-Allegheny, are already whining that the Supreme Court is legislating from the bench. However, as a defendant in the case, and one of the most partisan hacks in Harrisburg, that’s exactly what the Koch Brothers probably told him to say.

Unfortunately, Gov. Wolf seems to kinda agree with him. Though he has yet to make a statement about today’s ruling, he was against the suit when it was originally brought up in 2015. Though he supports increasing education funding and has consistently pushed for it with every budget proposal, he is leery of the courts butting in.

Sadly, his strategy of incremental education budget increases has been failing. Or, to be fair, it’s succeeding at such a slow rate that it would take decades for it to catch up.

In addition, impoverished students have greater needs than rich ones. They often don’t have books in the home or access to Pre-kindergarten. Poor students often suffer from food insecurity, malnutrition, a lack of neonatal care, worse attendance, are less well rested and have greater special needs and suffer greater traumas than wealthier students. Moreover, it is no accident that the group being privileged here is made up mostly of white students and those being underprivileged are mostly students of color.

The time is here when Pennsylvanians have to decide where they stand. Are they for a state that offers all children an equal start or do they prefer one where poor brown kids suffer so rich white ones can get ahead?

Today, the matter is in the court’s hands.

11 thoughts on “PA High Court Says, “Yes, Schools CAN Sue State Over Unfair Funding, After All!””