I’m not going to pull any punches here.

Donald Trump is not just a bad President.

No. That doesn’t go far enough.

He’s one of the worst people ever to hold public office in this country.

He’s a pathetic excuse for a person. A narcissistic and incurious fool.

Donald Trump is what happens when you spoil a child and he never has to prove his own worth.

He is the fruit of our worship of wealth and the ruling class. He is the lie of trickledown economics. He is what happens when you give someone all the rewards our society has to offer – just for showing up.

But he’s not a racist.

Not really. Not in the strictest sense. That would require some kind of commitment.

Nor is he a sexist. That would require ideology.

Trump doesn’t hate anyone. He doesn’t divide people up into categories. He just loves himself so much that his regard for anyone else seems lacking.

In Trumpland, there are only two personas – himself and everyone else.

And make no mistake – he sees the world as containing only one important personality – Donald J. Trump. Everyone else is subordinate. Even his own family is important only in so much as they reflect him and meet his expectations. (Tiffany Trump, anyone?)

Trump is the sole practitioner of a solitary religion where one individual can serve as both penitent and deity. He writes his own hymns and sings them to himself every morning during golden thrown Twitter church services.

And anyone who dares to deny the fact of his own exceptionality is not good. They’re Bad. Sad.

They get low ratings. Such low ratings. Fake news. Or whatever other nearly monosyllabic criticism his atrophied brain can defecate out of his sloppy mouth.

Other people’s suffering just doesn’t matter. Puerto Rico, NFL players, people of color unjustly targeted by police, the middle class – none of us matter to him.

No one. Literally no lives matter to Trump.

This is a fact borne out by his actions over decades in public life.

Trump may not be psychopathic, but he is clearly a solipsist, a sociopath. The outside world is not real to him, and we are not ends in ourselves. We are illusions who only merit if we increase his own self-worth.

Even from a conservative heteronormative viewpoint, men do not represent the possibility of friendship or camaraderie to Trump. They are pawns to be used or adversaries to be avoided.

Women do not represent the possibility of intimacy or understanding. They are pure shape, status and physicality – objects to be ordered, groped, controlled and tabulated.

Likewise, his constituents are important only to the degree that they support him. He has no reciprocal responsibilities toward them. He may have promised to “Make America Great Again,” but to this stunted individual, America, itself, is best represented by one thing – Trump.

He is the poster boy for all that is wrong with our society.

He is petty, unintelligent, and mean. Everything he has was handed to him. In fact, he’d have more if he just held onto it, but he had to try to prove he deserved this stuff so he lost more than what he was given.

And he doesn’t even know how to enjoy what he has.

His wife is a product he bought and modified to his liking. His children are indentured servants made to reflect his brand. He doesn’t even understand how to extract the best flavors from the expensive foods he eats.

He spends most of his time obsessively playing a game that requires wealth as a prerequisite, that isn’t particularly athletic but bestows a certain image on its practitioners. And somehow he must think hitting a little ball with a hooked stick proves – what? Something about him? Maybe it proves his physical prowess, his identity as a man of wealth and privilege?

He is the illusion Gatsby tried to portray to win Daisy – but the only love Trump covets is his own.

He both demonstrates the lie at the heart of the American Dream – that it is possible anymore for any of us to achieve – and that the dream has any inherent value.

Wealth does not make one happy. Look at Trump. He is a miserable son of a bitch. And he would be the first to tell you so if he had even a smidgen of self-reflection.

This is a man begging to be told he is doing a good job, but the only opinion he trusts is his own, and that one not even so much.

He is a lost soul telling himself lies he only half believes. He’s an apparition, a ghost, a zombie that never was really alive in the first place.

And we, the people of the United States of America, are gathered here around him in an ever closing circle watching this tin pot dictator getting ever smaller by the hour.

One fine day he will simply disappear. And we’ll all be left staring at the space he left behind.

Perhaps this vanishing act will be accompanied by a “pop,” a “hiss” or just a silence deeper than background static.

And the only question that will remain will be if we’ll all be sucked into the maelstrom of his leaving.

Or if we’ll all shake our heads and wonder…

What the Hell had we just been looking at? 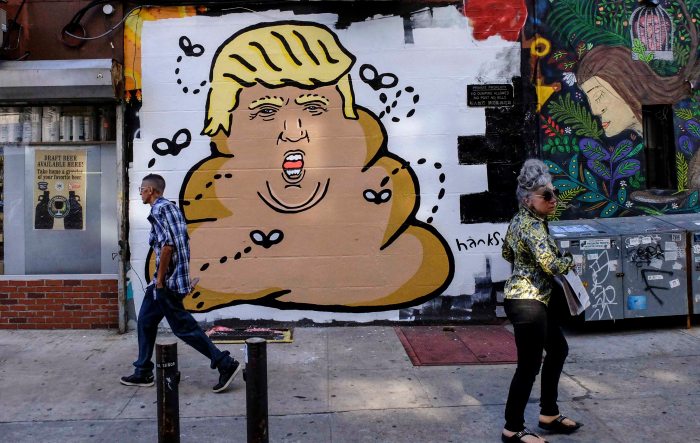