Skip to content
HomeSchool Accountability Begins With the People Who Make the Rules: A Code of Conduct for Politicians and Test Makers 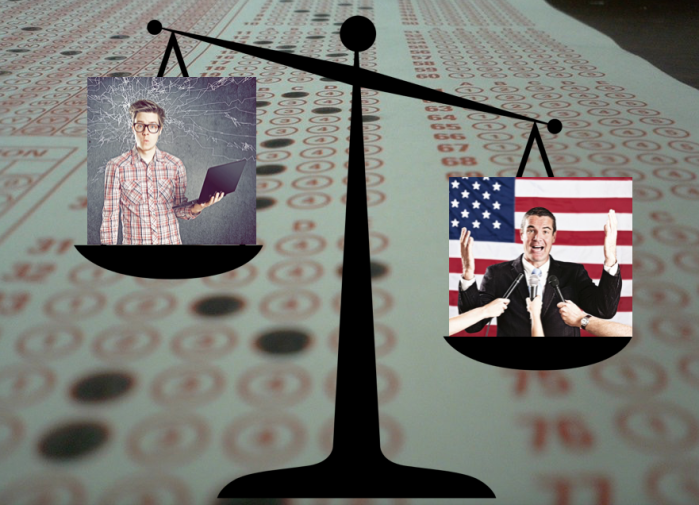 Standardized testing is all about accountability.

We’ve got to keep schools accountable for teaching.

We’ve got to keep students accountable for learning.

It’s kind of a crazy idea when you stop to think about it – as if teachers wouldn’t teach and students wouldn’t learn unless someone was standing over them with a big stick. As if adults got into teaching because they didn’t want to educate kids or children went to school because they had no natural curiosity at all.

So we’ve got to threaten them into getting in line – students, teachers: march!

But that’s not even the strangest part. It’s this idea that that is where accountability stops.

No one has to keep the state or federal government accountable for providing the proper resources.

No one has to keep the testing companies accountable for creating fair and accurate assessments.

So I thought I’d fix that with a “Code of Conduct for Politicians and Test Makers.”

After all, that’s what we do when we want to ensure someone is being responsible – we remind them of their responsibilities.

You see, the state and federal government are very concerned about cheating.

They’re very concerned about THAT.

When you threaten to take away a school’s funding and fire teachers based on test scores, you tend to create an environment that encourages rampant fraud and abuse.

So the government requires its public servants to take on-line courses in the ethics of giving standardized tests. We have to sit through canned demonstrations of what we’re allowed to do and what we aren’t allowed to do. And when it’s all over, we have to take a test certifying that we understand.

Then after we proctor an exam, we have to sign a statement swearing that we’re abiding by these rules to ensure “test security.”

This year, for the first time, I’m supposed to put my initials on the answer sheets of all of my students’ Pennsylvania System of School Assessment (PSSA) tests to prove….  I don’t know. That I was there and if anything went wrong, it’s my fault. Burn the witch. That sort of thing.

Even our students have to demonstrate that they’re abiding by the rules. Children as young as five have to mark a bubble on their test signifying that they’ve read and understood the Code of Conduct for Test Takers.

Forcing children to sign a legal document without representation or even without their parents or guardians present – it sure looks like a violation of their civil rights.

But that’s what accountability looks like when you only require certain people to be accountable.

So back to my crazy idea.

Perhaps the corporate flunkies actually designing and profiting off these tests should be held accountable, too. So should lawmakers requiring all this junk.

Maybe they should have to sign a “Code of Conduct for Politicians and Test Makers” modeled after the one the rest of us peons have to use to sign our lives away.

CODE OF CONDUCT FOR POLITICIANS AND TEST MAKERS:

-Listen to the complaints, concerns and criticisms of parents, teachers and students about the questions and assessments you’re creating.

–Ask advice from education researchers and all stakeholders to ensure the questions you’re designing are backed up by psychological, neurological, sociological and all associated research on child development.

-Read each question you create carefully to ensure it is not simply multiple choice and instead assesses deeper understanding of concepts and skills. Also be sure that all open ended items and writing prompts allow for a multitude of answers and don’t simply ask the test taker to guess what the test maker is thinking.

-Be careful when writing your questions to make sure you have NOT left misspellings or grammatical mistakes in place that would unnecessarily increase confusion for test takers and thereby invalidate the results.

–Check and double check to make sure you have created a fair and accurate assessment before giving it to students to evaluate their learning.

-Report any suspected cheating to a certified watchdog group and the media if you find any evidence or have any suspicion that anyone has created test items purely to enrich the corporation you work for or the privatization-testing-prison industrial complex.

-If you’re a lawmaker who’s voted for annual testing, take the assessment annually yourself to prove that it is an adequate test of basic student knowledge of which as a duly elected representative you should clearly pass. Publish your score prominently in the media to prove the test’s efficacy.

-Have notes in your possession from special interests such as (but not limited to) the testing corporations, the publishing industry and/or the ed tech industry before, during or after voting for legislation that promotes the very same standardized testing and testing remediation on which these industries profit.

-Have any (approved or otherwise) electronic devises that tabulate previous test questions and prescribe reusing those that have resulted in answer curves consistent with previous tests thereby continuing the trend of selecting against students of color, the poor and other groups and/or subgroups.

-Share inside information about the test or previous test questions with anyone that you do not also make freely available to the public. It is not your job to create a remediation market and/or cash in on the testing apparatus you are creating.

-Dissuade students from talking with others about  questions after the test. They are human beings with rights. It is perfectly natural for them to talk and harmless for them to do so after a testing session is over.

-Take notes on individuals criticizing or opting out of testing with the purpose of punishing them for their dissent. This is a democratic process and you will welcome discussion, criticism and dissent.

-Use the bubbles in the answer booklet for anything at all. In fact, throw them away. It’s 2019. Surely we can find a better way to assess children than multiple choice questions answered by filling in bubbles on a sheet of paper with a number 2 pencil!

–Conduct an online testing session unless you are 100% positive that the information input by the students and collected about the students is secure, will be secure and cannot be shared with advertisers, corporations or any other entity, and only with a certainty that this data will not be put in any database in a manner that could identify individual test takers or otherwise violate privacy laws.

-In fact, you know what? Don’t use standardized tests at all to assess student learning – especially not connected to high stakes. Instead rely on classroom grades and teacher observations for student assessment. Use indexes and audits of school resources to determine whether they are doing their best to teach students and whether lawmakers have done enough to ensure they are receiving fair and equitable resources.

What do you think? Would any of them sign off on this?

23 thoughts on “School Accountability Begins With the People Who Make the Rules: A Code of Conduct for Politicians and Test Makers”