The defining moment of Pennsylvania’s one and only gubernatorial debate wasn’t made by incumbent Tom Wolf or his challenger Scott Wagner.

It was made by former Republican Gov. Tom Corbett.

At least it was made by him seven years ago.

Before voters overwhelmingly choose the Democratic Wolf to replace him, Corbett told a whooper about his administration and education funding – namely that he DIDN’T cut almost $1 billion from the poorest schools in the Commonwealth.

But Corbett wanted us all to believe it wasn’t him or his administration that took that money away.

It was untrue then, and it’s untrue now.

Yet that didn’t stop Wagner from dusting it off before 1,700 people and moderator Alex Trebek at the annual Pennsylvania Chamber of Business and Industry dinner in Hershey:

“Trebek: What you have not mentioned is education suffered immensely about seven years ago when Gov. Corbett knocked off about a billion dollars. And…

Wagner: That’s totally false. Those were federal stimulus dollars. Gov. Wolf went around and told that. It was a lie. Gov. Corbett … (Clapping)… And the stimulus money came in during Gov. Rendell’s administration. And so Gov. Corbett’s here tonight. People need to know that Gov. Corbett did as much for education as really any governor. (Clapping) And he needs to be remembered for that. He didn’t cut the billion dollars. It was a billion dollars of stimulus money that came in and they were told – the education system – I wasn’t there – Don’t hire teachers, don’t… They did all that. Guess what? Here’s the problem with the system, Alex. The billion dollars. It’s gone. We have nothing to show for it.”

Here’s the crux of the bedtime story he’s telling.

The big bad federal government gave us money, and when that money was spent, we didn’t have it anymore. So what mean ol’ Gov Wolf calls a budget cut was no one’s fault.

The problem is it’s baloney.

The federal government DID give Pennsylvania stimulus dollars for its schools for one-time infrastructure improvements. However, the state legislature reacted by reducing the amount of state money it used to fund schools at the same time forcing districts to use the stimulus for operating costs.

It’s as if someone gives you a couple hundred dollars for your birthday and then your boss stops paying you your salary. That may work this week, but next week you need your paycheck. Otherwise you don’t have money to pay the bills.

Your boss can’t say to you: I’m not cutting your wages. Look I gave you just as much money this week as last week.

That won’t fly. But it’s exactly what Corbett tried to sell voters almost four years ago and they weren’t buying it.

And now Wagner is pulling out the same moldy lie, brushing off the flies and trying to pass it off as the truth. 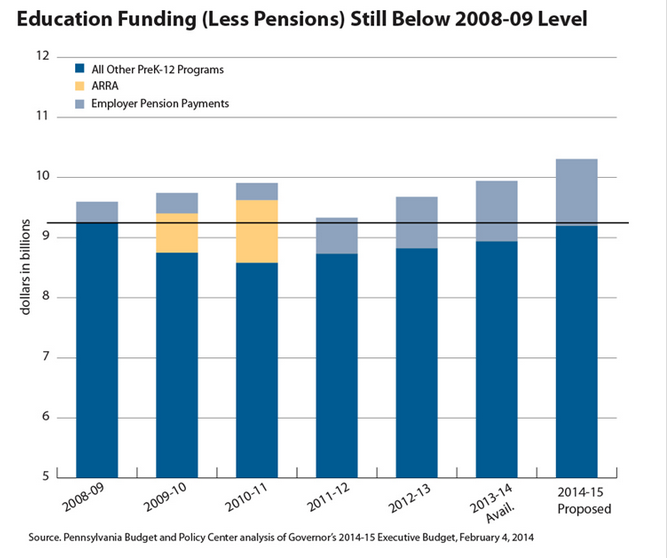 This is troubling for two reasons.

First, it shows Wagner is as deceitful as his heroes Corbett and Donald Trump.

Corbett didn’t stop at saying he never cut the money he cut. He went so far as to say he actually RAISED school funding!

That’s like urinating on someone and telling them it’s raining.

And he did it with dishonest accounting – lumping pension funds for teachers in with classroom funding and pretending they were all the same.

He took a bill that was already due (pension costs) and pretended like that money was paying to run the state’s classrooms.

So children throughout the keystone state suffered and some even died.

Apply that to Wagner’s rapidly changing position on education funding.

He has long been an advocate for slashing school budgets. In fact, he was a popular surrogate for Corbett when this whole catastrophe was going down.

But now that his campaign has seen how unpopular that position is, very recently he’s changed his tune.

Suddenly he says we should increase education funding.

And good for him.

However, if he’s using the Corbett playbook, it seems that “increase” really won’t be anything of the sort.

It will just be more creative accounting and fantasy storytelling. He’ll pay for pensions and say he’s increasing school funding. Or maybe he’ll fudge something else from column A and pretend it’s funding column B.

It’s disingenuous, dishonest and Pennsylvanians aren’t going to put up with it.

Perhaps that’s why Wolf is leading in the polls.

Wagner may have found a way to get his supporters into the debate hall – they certainly clapped loud at his points – but they are a minority among voters.

I wish Trebek had called him out on it.

I wish Gov. Wolf had challenged him.

But time was running short and Wagner still had to complain about a college swimming coach with too high a pension, and he had to whine about mean old Wolf demanding the Marcellus Shale industry pay its fair share of taxes.

There were plenty of other sparks at the debate.

Wagner raged about this and lied about that. He thinks running a state like Pennsylvania is like managing his $75 million garbage hauling company. But if given the chance, it will be our children’s future’s that are left in the trash.

Meanwhile, Gov. Wolf looked like the adult in the room, soberly explaining the improvements he’d overseen in his term in office (a balanced budget, healing some of the Corbett education cuts, etc.) and outlining where we need to go in the future.

Every time Wagner slammed him for taking support from unions, I wished he’d spoken up. But he just let it pass like Casey at Bat looking for a perfect pitch.

“You keep talking trash on unions,” he’d say. “Yeah, many of my supporters are union workers, union teachers, nurses, letter carriers, construction workers. Yes, I’m supported by working people and I support them in turn. Labor is the backbone of this nation and that’s true here in Pennsylvania as it’s true everywhere.”

Don’t get me wrong. I think Pennsylvania voters have a clear choice here – the sane, sensible Wolf vs. the blowhard and capricious Wagner. But how I wish Wolf had shown more fight!

The only thing the media seemed moved to report, though, were the antics of Trebek.

Twitter squeaky wheels thought the Jeopardy host’s moderation was weird. I’ll admit a tangent into the Catholic church and pedophile priests may not have been necessary. But he made the entire event more watchable and he called out Wagner’s lies more often than not.

The question is: What will voters do in November?

Here’s a video I made about Corbett’s budget cuts – a story so simple even Wagner and Corbett could understand it: