Skip to content
HomeThe Blinders of Partisanship: How Republicans and Democrats Miss the Point – We’re All Being Screwed 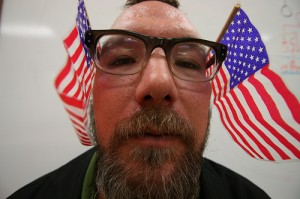 It’s how quickly many of our allies on the right gave up their beliefs to fall in line.

Under President Barack Obama, those on the left and right were united against Common Core.

We both realized it was a terrible policy – though sometimes for different reasons. Never-the-less, we put aside politics to fight Bill Gates, David Coleman, Eli Broad and other privileged left-leaning elites.

And through this common struggle we came closer ideologically. I’m a New Deal FDR Democrat, but even I could see how the Obama administration overstepped its federal authority pushing charter schools, standardized testing and the Core down our throats.

But as soon as Trump ascended to the Oval Office, many conservatives gave up their objections to this same kind of federal overreach.

This is incredibly hypocritical. Yet it’s not just with this one issue.

We see the same thing with healthcare. What we now call Obamacare was invented by a far right think tank, the Heritage Foundation. It was first implemented by Mitt Romney as Governor of Massachusetts. But as soon as Obama took up essentially the same policy, conservatives put forward hysterical opposition. And now the Trump administration is Hell-bent on repealing Obamacare – a far right solution to healthcare – simply because a black Democrat touched it.

The same thing happens on the left.

Corporate Democrats advocate hard for public tax dollars to be used to fund essentially private schools.  That’s what charter schools are – schools run by private interests but labeled public only because that’s where the money comes from. Yet when Republicans advocate giving tax dollars to private schools without the “charter” label, corporate Democrats pretend like it’s the largest ideological divide since the Cold War. It’s not. There is very little difference between charter schools and school vouchers – both are terrible policies that fund essentially private schools with public money, but Democrats pretend like one is the silver bullet to all our education problems and the other is death personified.

It’s disgusting, but it works.

This kind of sophistry fools a lot of voters.

People still think politics is a football game. There are two teams. You pick one and stick with it no matter what.

However, it’s just a con. Both sides are out to screw you over. If there is a difference at all, it’s that Democrats are out to destroy the world at a slower rate. Republicans want to burn it all down right now.

Both parties are out only for the richest of the rich. They both support policies that back up the wealth class and degrade any protections for the middle class or poor. It’s Rome all over again – support a bloated military and the patricians while offering the plebs nothing but propaganda and false promises.

Yet we fall for it. Still.

And it’s not like there isn’t a sizable resistance to the plutocracy of both parties.

The Women’s March, the Fight for 15, the struggle against the TPP and the Dakota Access Pipeline – Millions of people have taken to the streets to protest the regressive policies of the Trump and Obama administrations. It’s just that when it comes to voting, we suddenly become either very timid or very apathetic.

Left-leaning pundits blame the tiny fraction of third party voters for Trump’s victory, but that’s not just wrong. It’s gas lighting. It’s not that too many people voted for Jill Stein. It’s that not enough did.

Millions of people are already out there doing the hard work of resistance. We need to have the courage of our convictions and unify under a single political banner.

Some hope that this could be a rejuvenated, renewed Democratic party. And it could, but the party elites have done everything they can to stop this from happening. Time and again, they take steps to keep the party powerless yet in their power.

Just look at the back room deals and last minute maneuvering that installed Tom Perez as party chair. He wasn’t even in the running until it looked like progressive Keith Ellison would win. So Obama, leader of the corporatists, pushed for Perez. Sure they gave Ellison a title with no power, but that’s not progress. It’s pretend.

The time will come very soon when the resistance has to wrench control away from the corporatist and fake progressives who silence any criticism with fake cries for unity behind their impotent banner. Or we will have to rise up as one with the courage to create a new party, a people’s party that truly represents our movement.

We have to get beyond these silly labels – Republicans and Democrats. We need to base our politics on ideas and what’s really best for everyone. We need to shut out any pundit getting rich off telling us what to think. And we need to find a way to listen to each other again, to see each other as people first and not representations of the other team.

In short, we need to see clearly our common cause and unify.

It’s easier said than done, but the first step is removing our partisan blinders and looking at each other with fresh eyes.

Most of us don’t live at Trump Tower or vacation at Mar-a-Lago. Most of us don’t play golf with the Obamas and Richard Branson. Most of us have the same wants and needs. It’s time we go about satisfying them and to Hell with all the corporate elites!

It’s time to be Americans first.

It’s time to rise up.

17 thoughts on “The Blinders of Partisanship: How Republicans and Democrats Miss the Point – We’re All Being Screwed”