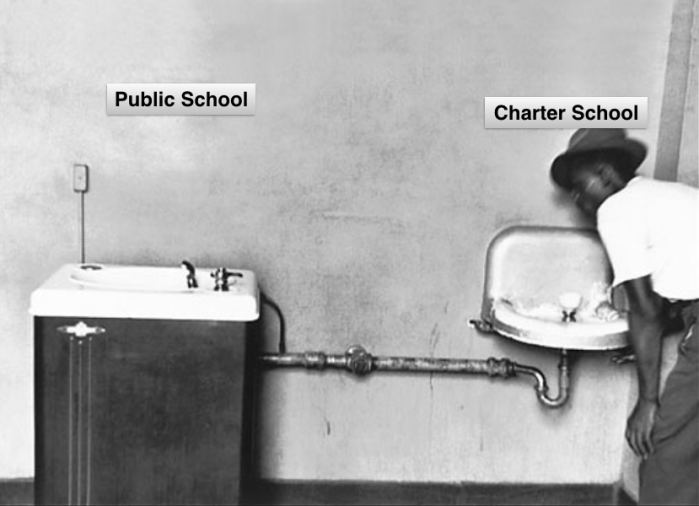 These may sound like the campaign cries of George Wallace or Ross Barnett. But this isn’t the 1960s and it isn’t Alabama or Mississippi.

These are the cries of modern day charter school advocates – or they could be.

School choice boosters rarely if ever couch their support in these terms, but when touting charter schools over traditional public schools, this is exactly what they’re advocating.

According to the Civil Right Project at UCLA, “The charter school movement has been a major political success, but it has been a civil rights failure.”

Advocates have become so blinded by the idea of choice that they can’t see the poor quality of what’s being offered.

In Brown vs. Board of Education, the U.S. Supreme Court ruled that it is Unconstitutional to have “separate but equal” schools because when they’re separate, they’re rarely equal. Having two parallel systems of education makes it too easy to provide more resources to some kids and less to others.

Who would have ever thought that some minority parents would actually choose this outcome, themselves, for their own children!?

It’s hard to determine the extent of this odd phenomena. Charter advocates flood money into traditional civil rights organizations that until yesterday opposed school privatization. Meanwhile they hold up any examples of minority support as if it were the whole story. However, it is undeniable that large minority populations still oppose their school systems being charterized.

It’s especially troubling for civil rights advocates because black and brown charter supporters have been sold on an idea that could accurately be labeled Jim Crow. And they don’t even seem to know it.

The reason is two-fold: (1) the success of privatization propaganda and (2) the erosion of our public school system.

Charter schools are big business. Many of them are managed by huge corporations for a profit. They are run at taxpayer expense with little to no oversight. As you might expect, this often results in multi-million dollar financial scandals and worse outcomes for students. But these facts have not fazed some of the public. Propagandists know how to sell people on things that are bad for them: Fast food, miracle cures and charter schools.

They’ve marketed corporate McSchools as if these were mostly charitable institutions founded for the sole purpose of making children’s lives better. Meanwhile, funds that might actually help kids learn are funneled to hedge fund mangers and investors: Schools don’t open yet tax money disappears. Student services are reduced below that offered at comparable neighborhood public schools. Charter students are expelled for low test scores or special needs. Yet the public still buys the glossy full-color advertisement without bothering about the small print.

One thing corporate education reformers have over advocates of traditional public schools is their willingness to talk about race. They clothe their arguments in the terms of the Civil Rights movement. They talk about having high expectations for children of color. They talk about closing the achievement gap. They talk about understanding the needs of minority children.

Their “high expectations” are really just an excuse for treating brown and black kids as if they weren’t human. They put these children under intense pressure, berating them for wrong answers and kicking them out if they don’t perform.

Yet the academic results produced at charter schools are often less than stellar. Sometimes they’re downright abysmal. Instead of addressing the fundamental inequalities inherent in the achievement gap – economically and culturally biased high stakes testing, shoddy and developmentally inappropriate academic standards, etc. – they reinforce that status quo. It’s like instead of fighting a prohibition against sitting in the back of the bus, they berate black folks for not enjoying the ride.

I’m sorry. But when it comes to understanding the needs of black and Latino kids, I refuse to believe children of color need a second-class education system. (Just as I refuse to believe Teach for America’s claim that all black kids really need are less experienced, less educated and less committed teacher trainees.)

Perhaps if traditional public schools actually addressed these issues head on, privatizers wouldn’t appear to be saviors. There are real problems faced by children of color in our school systems. They have real needs that most of our schools – charter, traditional, private or parochial – just are not meeting. But while charter schools pay lip service to the problems without fixing them and in fact often making them worse, public schools pretend these problems don’t exist in the first place.

No wonder some minority parents choose charter schools. At least there they get the illusion that someone cares about their needs.

This is what people are really talking about when they mention “failing schools.” They pretend as if the teachers are failing, the principals are failing, the democratic process, itself, is failing. In reality, it is our state and federal lawmakers who are failing. They have failed to provide equitable resources that our nation’s children need.

Schools cost money. If you don’t provide the funding necessary to properly educate children, you will get an inferior result. Meanwhile, pundits play with numbers and make false comparisons to hide this basic fact – we aren’t providing all kids with the resources they need to succeed. Rich kids have enough. Poor kids don’t. But we look at national averages, add in unfunded legal mandates and pretend that tells the whole story.

How does this happen? Segregation. In fact, we’re allowing segregation of place to determine segregation of school. Instead of counteracting an unfair status quo, we’re letting the way things are today determine how things will be tomorrow.

Fact: people of different ethnicities tend to cluster together, like with like. Part of this is because people tend to self-segregate with people around whom they feel most comfortable. However, this is also a function of social planning. Banks tend to shy away from giving loans to families of color who want to move into white neighborhoods. Moreover, white homeowners are often reluctant to sell to families of color. The result is an America made up of black neighborhoods and white neighborhoods.

In organizing our public schools we could try to overcome these differences, but instead we amplify them. In many states we insist that schools be funded based on local property taxes. So poor brown and black people who happen to live clustered together get poorly funded schools for their kids. And rich white folks who live together in their gated communities get well-funded schools for their progeny.

Is it any wonder then that some people of color buy into the charter school lie? They’re offered the choice between an obviously under-resourced public school or a glossy new charter school that actually offers them less. But they don’t see that far. They’re tired of the indifference behind traditional public school funding and opt to try something different. Unfortunately, it’s just another lie and a more pernicious one for several reasons.

First, charter schools take an already segregated population and make it worse. Second, they weaken the already stumbling traditional public schools by siphoning off their dwindling funding. And finally, they obscure the fact that it’s often the same policymakers who champion charters that are responsible for eroding public schools in the first place.

People of color would be much better served by sticking with their traditional public schools and fighting to make them better. For all their faults, traditional public schools often provide a better quality education. They have more resources and less flexibility to take away those resources. They have more well-trained and experienced staff. And since they serve a more diverse population, they offer the chance for people of similar economic backgrounds but diverse cultures to join together in common cause.

Dividing people makes them weaker politically. When people band together, they have power. They can fight more effectively for what they deserve. Perhaps this is the greatest problem with charter schools – they destroy communities and rob neighborhoods of the collective power that is their due.

And when privatizers and propagandists try to paint all communities of color as if they support charter schools, these folks will loudly cry foul.

They aren’t buying the snake oil. The rest of us need to step up and help those who have been swindled to see the truth. Likewise we need to recognize their truth – that the struggle for civil rights is ongoing.

We need each other.

Public school advocates need to recognize it’s not all about testing, Common Core and privatization. We can’t be so afraid to talk about race. We need to recognize that racism is not an unnecessary distraction, it’s at the center of our struggle.

We need communities of color.

We need our black and brown brothers and sisters.

Because only together shall we all overcome this madness.