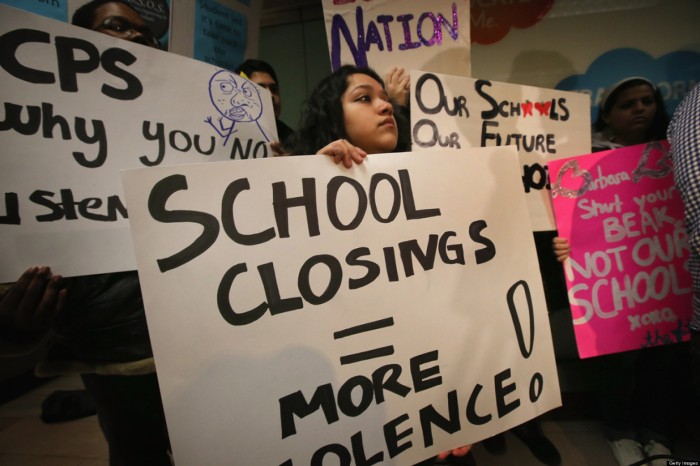 It’s funny. When you close schools serving minority students, they tend to move away.

Who would have ever thought that cutting funding to services for minorities might make them get up and leave?

But God forbid you suggest this is intentional!

These are just disparate facts. There is no conceivable causal link between making life intolerable for people and their leaving.

When has that ever happened before?

The Great Migration (1919-1950) when hundreds of thousands of blacks moved from the deep south to the shores of Lake Michigan looking for better opportunities?

Well, sure, but when else has that ever happened?

You can’t connect one dot to another.

That would just be rude.

Yet that’s just what Chris Kennedy, a candidate vying to run against Illinois Governor Bruce Rauner on the Democratic ticket, did this week.

He said that Emanuel is running a “strategic gentrification plan” to intentionally push black residents out of the city.

“And I think that’s part of a strategic gentrification plan being implemented by the city of Chicago to push people of color out of the city. The city is becoming smaller and as it becomes smaller, it’s become whiter.”

The establishment immediately pushed back against him.

The Chicago Sun-Times couldn’t find any fault with Kennedy’s facts, but they called his interpretation “irresponsible.”

Emanuel’s office likewise issued a press release likening Kennedy’s claims with those of Republicans like Rauner and President Donald Trump, even though both of those individuals would be more likely to champion a plan to kick blacks out of Chicago than criticize it.

Kennedy’s remarks simply echo what black Chicagoans have been saying for years.

FACT: Since 2001, 72 Chicago schools have been closed or phased out. Ninety percent of the students affected are black.

Sure, eventually they’ll be replaced by one new school, but only after at least a year without any high school in the area.

When the new school finally opens, the neighborhood will be less black and better suited to what? Gentrification!

Jitu Brown, National Director for a broad based collective of civil rights organizations called Journey 4 Justice, estimates that more than 30,000 people of color have fled Chicago since Emanuel took office.

Brown led a group of community members to sit in at the Chicago Board of Education today to protest the proposed closings.

“Rahm wants to close successful black grammar school to make room for upper income families! We have proof! That’s why we sit-in,” he tweeted.

Back in 2013, Brown broke down his argument at a hearing before the US Department of Education:

Kennedy really isn’t saying anything different. He’s just echoing the concerns of the community he wants to represent.

“I don’t know what you can say when the strategic plan for Chicago Public Schools suggest that the entire community of Englewood can go an entire year without access to a high school,” Kennedy said this week.

“What are you saying to the people there? No one’s going to move there who’s got a high school kid. And anybody with a high school kid has to think about what they’re going to do. It’s just a device to empty out the community.”

The problem is not limited to Chicago. It’s emblematic of public school policy nationwide.

From 2003-2012, in New York City, 117 schools were closed. Sixty-three percent of the students affected were black.

In 2008, 23 schools were closed in Washington, DC. Ninety-nine percent of the students affected were black, Latino or Hispanic.

Since 2005, in Detroit, 130 schools have been closed. Ninety-three percent of the students affected were children of color.

And one and on.

We intentionally segregate students based on race and class, then allocate funds accordingly. Richer whiter students get all the resources they need. Poorer blacker students get crumbling schools, narrowed curriculum until their schools are shuttered and they’re forced to either move away or put up with fly by night charter schools.

Look at what happened in New Orleans.

After Hurricane Katrina in 2005, the state took over 107 of the city’s then-128 public schools, removing them from local control of the residents. The majority of these schools were turned into charters, closed or simply never reopened – a move affecting 90 percent of black students and only 1 percent of white students.

Karran Harper-Royal, a New Orleans parent and cofounder of the national group Parents Across America, argued at the same hearing in 2013 before the US Department of Education that the result was racist.

They call it school choice, but parents don’t have choice when 80 percent attend charter schools – some of which run a lottery enrollment process, she said. As a result, parents are forced to apply to multiple charter schools to ensure their children have somewhere to go to learn.

“African-American students are more likely than their white counterparts to experience schools that are at risk of being closed down, phased-out, turned around or co-located,” Harper-Royal said. “To guarantee me a seat in a failing school system is not ‘choice.’ It’s racist is what it is.”

This is the reality for poor and minority students across the country.

It’s refreshing to hear a Democrat brave enough to actually speak the truth about it – especially since Democrats have been as apt to preside over these corporate education reform policies as Republicans.

Closing black schools and keeping white ones open is not an accident.

Neither is continuing school segregation, the proliferation of charter and voucher schools and the continued insistence that the only way to hold educators accountable for actually educating is high stakes standardized testing.

These are all choices that result in winners and losers.

It’s time we recognized that. If we really want to champion civil rights and equity for all, we need to stop promoting racism as school policy and pretending to be surprised at the results.