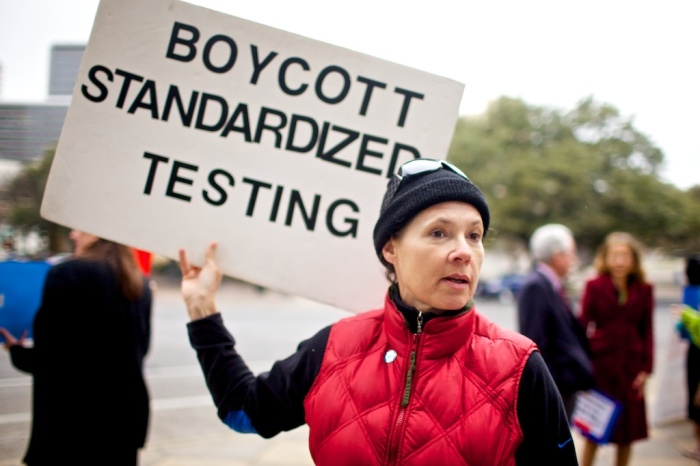 Our lawmakers have a problem.

This summer they doubled down on one of the most anti-democratic mandates in the federal repertoire yet they claim they did so to protect states rights.

Every year, hundreds of thousands of public school parents across the country opt their children out of standardized testing.

But Congress voted to keep mandating that 95% of students take the tests.

It all happened with the much celebrated bipartisan passage of the Every Student Succeeds Act (ESSA), the federal law that governs K-12 schools.

While lawmakers made changes here and there to let the states decide various education issues, they kept the mandate that students participate in annual testing.

They didn’t leave that to the states. Whether they were Republican or Democrat, almost all lawmakers thought it was just fine for the federal government to force our children to take standardized tests at least every year in 3-8th grades and once in high school.

If any school district, has more than 5% of students that don’t take the tests – for whatever reason – the federal government can deny that district funding.

Think about that for a moment.

Our lawmakers are supposedly acting in our interests. They’re our representatives. We’re their constituents. They get their power to pass laws because of our consent as the governed. Yet in this instance they chose to put their own judgement ahead of ours.

They could have made an exception for parents refusing the tests on behalf of their children. They just didn’t see the need to do so.

Why? Because they were worried about minority students.

It’s a laughable claim in so many ways.

It goes something like this – without standardized testing, we’ll have no way of knowing if public schools are educating students of color.

Let’s say for a moment that this were true. In that case, we can expect no parent of color would ever refuse standardized testing for his/her child.

First, this is demonstrably untrue. Black and brown parents may not be the most numerous in the opt out movement, but they do take part in it.

Second, in the majority of cases where white parents refuse testing, that would have no bearing on whether testing helps or hurts students of color. If the point is the data testing gives us on black kids, what white kids do on the test is irrelevant.

Third, even if opting out hurt students of color, one would assume that it is the parents prerogative whether they want to take part. If a black parent doesn’t want her black son to take a multiple choice exam, she should have the right to waive that exam and the responsibility would be on her head.

So there is absolutely no reason why lawmakers should have overstepped their bounds in this way and blocked all parents rights about what the schools do to their children.

It is a clear case of governmental overreach. And there are plenty of parents just waiting to bring it to the U.S. Supreme Court for the ultimate Constitutional test.

However, that probably won’t happen for the same reason it never happened through the 15 years of No Child Left Behind (NCLB) which also contained the annual testing rule.

The federal government has never withheld tax dollars based on students not taking standardized tests. officials at the U.S. Department of Education have made threats, but they have never devolved into action.

The bottom line is this: they know how Unconstitutional this mandate is, and they aren’t itching to have it tested in the highest court in the land.

The ESSA is an attempt to reduce the federal role, but keeping the annual testing mandate was either a grievous mistake or the last vestiges of federal hubris.

But let’s return to the reasoning behind it – so-called civil rights fears.

Various groups including the NAACP asked for it to be included to protect minority students. Annual testing is the only way, they claimed, to make sure schools are teaching students of color.

There are plenty of ways to determine if schools are meeting the needs of minority students – especially since most students of color go to segregated schools.

In fact, THAT would tell us much more about how these two groups are being served by our public schools than standardized test scores. We’ve known for almost a century that these test scores are more highly correlated with parental income than academic knowledge. They’re culturally biased, subjectively scored and poorly put together. But they support a multibillion dollar industry. If we allow a back door for all that money to dry up, it will hurt lawmakers REAL constituents – big business.

So why were civil rights groups asking the testing mandate be kept in the bill? Because the testing industry is comprised of big donors.

Only a few months before passage of the ESSA, many of these same civil rights groups had signed declarations against standardized testing. Then suddenly they saw the light as their biggest donors threatened to drop out.

Make no mistake. Standardized testing doesn’t help poor minority children. It does them real harm. But the testing industry wrapped themselves up in this convenient excuse to give lawmakers a reason to stomp all over parental rights.

Let me be clear: legislators cannot be against opt out and in favor of individual rights.

The two are intimately connected.

Our schools have no business telling parents how to raise their kids. But our parents DO have a right to do the opposite. In fact, that’s how the system is supposed to work.

We, parents and citizens, control our schools – not you, our representatives. The principal can’t say you haven’t a right to opt out your kid. He’s just your representative. So is the teacher.

Everyone who works in the school is there to do what you want them to do for your child. Yes, they are well trained and have a world of knowledge and experience that we should draw on. And in most cases, they’re being forced to confront us by lawmakers who are tying their hands and directing them to do the dirty work.

In short, we don’t need lawmakers consent to opt out. They need our consent to stop us.

They get their power from us. They work for us.

And it’s time they get to work and rescind the annual testing mandate.