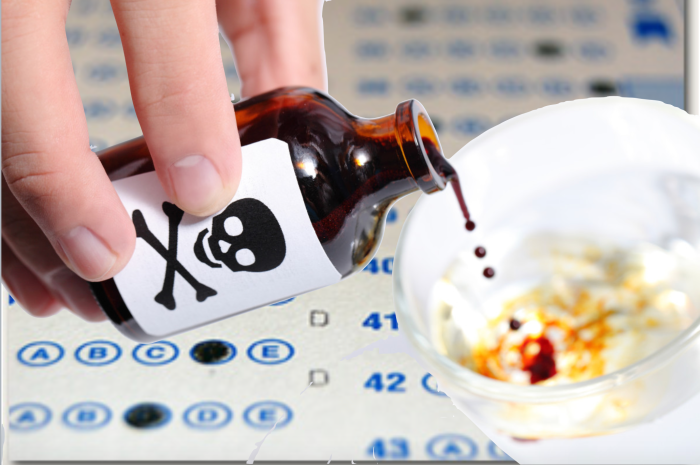 Let’s say someone gave you a vial of poison.

Would you drink it? Of course not.

What if he gave you the antidote, too. Would you take the poison then?

Why would anyone knowingly ingest poison even if they knew they could counteract its effects?

But that’s pretty much the situation high school students across the country are in today with the SAT test.

The College Board has admitted that the test unfairly assesses students – especially poor and minority students. However, if we add an “adversity score” to the raw score, then voila! Fairness!

The organization is piloting a program at 150 colleges and universities to adjust SAT scores to account for high schools and neighborhoods “level of disadvantage.”

The program is called the “Environmental Context Dashboard” and has been in the works since 2015 at the request of colleges. It provides admissions officers with information about students’ neighborhoods and high schools, such as the poverty level and the availability of challenging coursework. This is supposed to allow them to put raw scores into context before making admissions decisions.

But even if this actually remedies the inherent racial and economic biases inherent in the 93-year-old assessment, why take the bloody thing in the first place!?

The College Board is a 119-year-old organization boasting 6,000 member colleges, universities and other organizations. And despite its nonprofit status, it does make an awful lot of money.

The organization’s annual revenue is more than $750 million, according to its most recent publicly available 990 form. The organization’s CEO David Coleman makes $750,000 a year, its President Gaston Caperton makes more than $1.5 million a year, and 22 other employees earn at least $200,000.

Nice work if you can get it.

As such, the College Board needs to ensure millions of teenagers keep taking its moneymaking test as they apply to institutions of higher education. But more than 1,200 colleges and universities no longer require students seeking enrollment to take the SAT and among those that do the upstart ACT test is gaining popularity and market share.

The SAT’s new adversity score is a marketing tool – nothing more.

It’s the act of rats trapped in a corner. They’re admitting everything critics always said about them and offering a white flag.

We have no need to take it. In fact, we would be incredibly stupid to do so.

What the world needs is not an adversity score to counteract all the bad things the SAT does. It needs the absence of the SAT and all such standardized gatekeeper assessments.

Coleman is infamous as the father of a number of failed education reforms including the Common Core.

It’s absolutely hilarious to hear him admitting the biases of standardized testing since he’s been one of its leading proponents since the 1990s. It’s like hearing Colonel Sanders admit he doesn’t really like fried chicken all that much.

In the case of the SAT, he said colleges need to recognize student qualities that the test can’t capture, such as resourcefulness. Essays, letters of recommendation, and the “profiles” most high schools post sometimes capture the challenges and circumstances students face, he said, but in many cases colleges don’t find this information because they’re blinded by students’ tests scores.

Without a tool like the dashboard, he said, “the SAT could be misleading.”

“To warrant that the playing field is now level isn’t right or just,” Coleman added. “In the America we live in … the vast majority of students are working with a lot less than the top third. To then say that the SAT is enough to reflect what you can do, no, it isn’t.”

All of which begs the question of why we need the SAT test at all.

Why not just look at those essays and letters of recommendation. Look at student extra curricular activities, employment record – heck! – grades!

Classroom grades represent 180 days worth of data compiled by multiple educators over at least 12-13 years.

Admittedly, they aren’t completely objective but neither are standardized test scores. We do not have the power to crack open children’s skulls and see what’s going on in their brains. But classroom grades offer exponentially more data and of a much more equitable kind.

If all of that isn’t enough to make admissions decisions, then nothing will ever be.

But let’s be honest. This isn’t about the needs of schools or students.

It’s about the needs of big business enterprises like the College Board and the standardized testing companies; it’s about their need to turn a profit.

THAT is what this adversity score is out to save.

We’ve been criticizing the SAT and similar standardized assessments since they were first implemented in 1926. They were the creation of group of psychologists led by Robert M. Yerkes and Carl Brigham.

They were eugenicists who believed that white Europeans were superior to all others and used their pseudoscientific assessments to “prove” their biases. If there’s any doubt of that, I refer you to this passage from Brigham’s seminal work A Study of American Intelligence:

“We should not work primarily for the exclusion of intellectual defectives but rather for the classification of men in order that they may be properly placed.”

It’s no wonder that the SAT is biased. Its creators were, and their assumptions about human nature still underlie the entire standardized testing enterprise.

No adversity score will ever undue that.

There comes a time when we need to simply stop the stupid racist crap we’ve been doing for generations – not try to prettify it so we can keep cashing in.

These sorts of conversions of scores have been tried before and routinely criticized as inaccurate.

The College Board tried something similar in the late 90s called the “striver’s tool.” It identified students who scored higher than expected based on racial, socioeconomic, and other data.

But it was shut down after it became a political football comparable to that of affirmative action – the same that has happened among certain conservatives with the new adversity score.

We’ve been engaged in unfair standardized testing for almost a century now.

Isn’t it time we admitted our mistake and moved on?

Or should we just keep drinking our poison and chasing it with a dubious antidote while our betters count their dirty money?