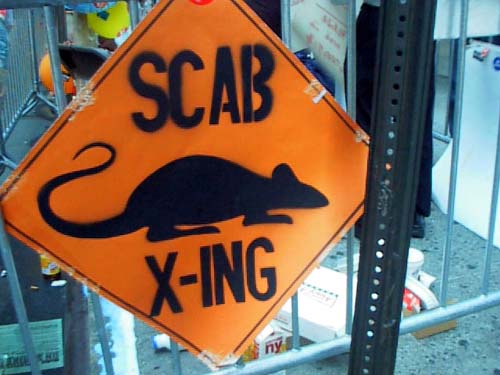 There is a special place in Hell for strikebreakers.

Some people kill. Some steal.

But only a filthy, disgusting scab can do all of that in one.

When you take someone else’s job, you’re stealing their bargaining power and killing the community’s chances for their kids.

This week as 30,000 teachers at Los Angeles Unified School District walked out demanding support for their students and their professions, a few slimy worms have crossed the picket line to keep some of the district’s 900 schools open.

Most parents have kept their children home, but some don’t have that choice. And the district is trying to use that opportunity to justify larger class sizes and fewer resources. While sitting on $2 billion in the bank, they pull out their pockets and play dumb. In the richest state in the country, they want you to believe there isn’t enough money to waste on children.

At least not on these black and brown children!

And whether they mean to or not, the craven, no account, flatulent scabs back them up 100%.

According to the LA Times, the district has students cloistered in holding areas while administrators tell them to fill in workbooks or go on their cell phones or iPads to learn via app.

Among these yes-men, you’ll find a handful of substitute teachers who put their own yellow bellies over solidarity with their fellows.

Not only is this sniveling, groveling behavior suitable only to strip the self-respect from the most base criminal, they aren’t even getting thirty pieces of silver for it.

According to the Times, at one school scabs are only being paid $160 a day – less than subs normally make. Yet for each of these fill-ins, the district is paying the Charter Substitute Teacher Network – an outside agency providing these miserable miscreants – $250 a day, which is in fact more than the usual sub rate!

How transparent! The district doesn’t even value its scabs! It would rather pay the corporation that provides these amoral dupes than the dupes, themselves!

How low a weasel do you have to be to take such a job? What kind of dung beetle? What piece of excrement could stoop so low?

No. Wait. That’s an insult to weasels, dung beetles and excrement!

Working people have one thing of value in this economy – their labor.

When you rob a person of the right to withhold that labor, you take away her power. You turn her into little more than a slave whose only choice is take it or leave it.

But when people are given the dignity to join together as one, to unify as one solid whole, they can equal the power of the wealthy and privileged.

They can stand together on their own two feet and demand a fair share.

And in these terrible times, when the powerful look at even public schooling as little more than an opportunity to further enrich themselves through no account charter schools and high stakes testing and endless ed tech bells and whistles – who is left to stand up for our children?

I’ll tell you who! The teachers!

We are all here united as one. We have drawn a line in the sand – and woe to the pustulent, putrid, pissant who dares cross it!

You want to make America great?

You want to make this country into something we, the people can be proud of?

Show some backbone, even if it hurts to stand up straight for once.

The only way forward, the only way to create a society worthy of our children, is to join hands and walk toward the promised land – together.

“After God finished the rattlesnake, the toad, the vampire, He had some awful substance left with which He made a scab … When a scab comes down the street, men turn their backs and angels weep in heaven, and the Devil shuts the gates of Hell to keep him out. No man has a right to scab so long as there is a pool of water to drown his carcass in, or a rope long enough to hang his body with.”