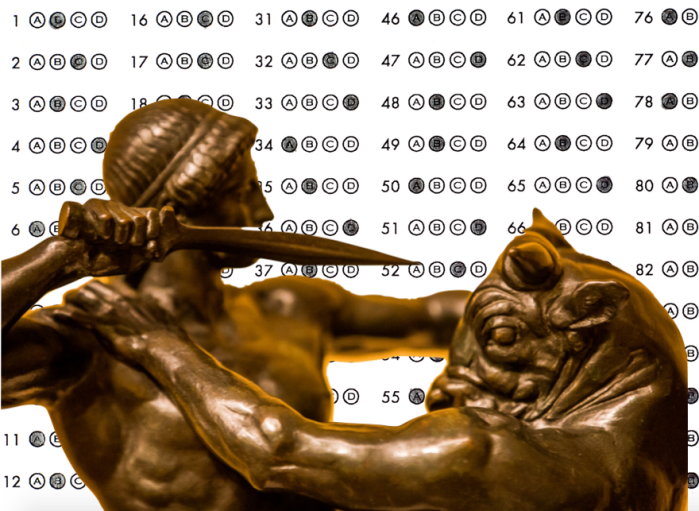 Let’s say there was a monster loose in Pennsylvania and you caught it.

Its days of wandering loose causing chaos and destruction were over.

But what would you do with such a beast now?

Would you kill it outright? Stop it from ever hurting anyone ever again?

Or would you simply neutralize it – place it perhaps in the center of a labyrinth, continue feeding it, and in fact create a whole religion based on worshipping it?

In the keystone state, we have just such a creature, and we’re going with the second option – the maze, nourishment and a cult.

The monster is, of course, the Keystone Exams. And like the Minotaur of ancient myth, we’re building a bureaucratic prison in which to house it.

Sure, we’ve spent billions of dollars on these unnecessary, badly written and biased graduation assessments.

And, heck, it would just make more sense to stop doing something that isn’t working, wastes money and causes legitimate problems for students.

But this is Pennsylvania! We’re not going to admit we made a mistake. Better to bury it under red tape and pretend like this is what we meant all along. Nothing to see here, folks. Nothing to see…

When lawmakers originally came up with this plan… correction: when testing companies bribed federal lawmakers to force state lawmakers to enact this cockamamey plan – it was supposed to function as a graduation requirement.

Pass these tests or no diploma for you.

However, somehow Harrisburg politicians couldn’t get up the nerve to actually bar tens of thousands of worthy students from graduating when they had already proven they deserved it by passing 12 years of grade school.

So after kicking the can down the road for more than 6 years, they came up with this solution. Make it a graduation requirement, but include a whole truckload of other options that could count instead.

In short, we’re creating endless corridors of paperwork, placing the tests in the center and going on with our day.

The good news: if students can make it through the labyrinth, they never need to take or pass the Keystone Exams!

The bad news: we’re still paying millions of dollars to support these tests and we’re still forcing our teachers to make all instruction about them.

And that’s what we in the Commonwealth call a “victory.”

The bill to circumvent the Keystone Exams by providing multiple means of getting a diploma was passed by the state house and senate. Gov. Tom Wolf is expected to sign it into law this week.

To sweeten the pot even further, this won’t even go into effect until the 2021-22 school year.

So in four years, high school seniors will be racing to submit their letters of college admission, or letters of employment or SAT scores or whatever to prove they actually deserve that diploma.

But that will not be the end of it.

Just because victims thrown into the labyrinth have an easy path to avoiding the monster doesn’t mean the monster won’t affect them.

This continues the tremendous state pressure for local districts to make instruction all about testing.

Kids don’t have to pass the test, but their everyday classroom experiences will still be largely determined by these test.

Heck, many districts will probably “voluntarily” decide to make passing the test a graduation requirement just to force their students to take them seriously.

So anyone who’s out celebrating that the Keystone Exams are dead is premature.

“Remember, the Keystones have been delayed and the graduation requirement associated with them has been stopped, but they will still be required in Pennsylvania schools for federal accountability,” he said in statement.

“Meanwhile, we know they are expensive, redundant and unnecessary and I will continue to work to end them once and for all.”

Dinniman, a Democrat, is minority chair of the Senate Education Committee.

It’s a problem all too typical in the state.

Most lawmakers are too timid to take any type of real stand. They’d rather support some half-measure so they can claim to be in favor of either or both sides of an argument.

For instance, consider the time it takes to finish the tests.

Parents, teachers and students have complained about how these assessments waste academic time that could be better used to teach the necessary skills needed to pass.

So Gov. Wolf cut the Keystone Exams and Pennsylvania System of School Assessment (PSSA) test by a total of almost 2 hours a year.

However, at the same time, his administration suggests students take a series of additional pretests that are supposed to predict success on the PSSA or Keystone Exams – tests such as the Classroom Diagnostic Tools (CDT) assessment.

If schools follow the state’s instructions and give students this exam in reading, math and science 3 to 5 times a year, that’s an additional 50-90 minutes per test. That comes to 22.5 hours of additional testing!

So 22.5 hours minus 2 hours equals… NOT A REDUCATION IN TESTING!

But it gives lawmakers plausible deniability.

They can claim to be cutting testing while actually suggesting we increase it.

And we see the same sort of thing here.

Lawmakers can claim to be reducing the power of the Keystone Exams while still enshrining it as the driving force behind all instruction in the state.

What we need are leaders and not politicians.

We need people willing to take a stand and do what’s right even if that puts them at odds with the moneyed special interests.

That takes more than polls and market analysis.

But there’s no test for that.