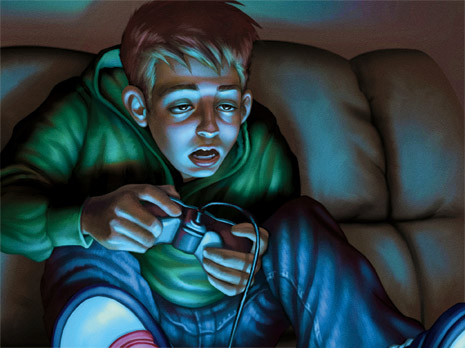 There is something monstrously unfair about our teacher evaluation systems.

If your students fail because they were up all night playing video games, it’s your fault.

It’s all just thrown on the teacher because, hey, someone’s got to be responsible. And it might as well be them.

I’ve written scores of articles about how standardized tests forced on students by the federal government are unfair.

They are developmentally inappropriate, culturally biased, and subject to a deep conflict of interest because the people making the tests get more money if test takers fail.

The tests drive the curriculum instead of the other way around. The scores needed to pass change from year-to-year invalidating annual comparisons. And many lawmakers pushing for these assessments are funded by the school privatization industry that uses failing test scores to sell its own fly-by-night brand of education.

These are real problems our education system faces every day.

But we mustn’t forget an even more fundamental one: we’re all responsible for student success or failure.

Not just teachers. EVERYONE.

Society, lawmakers, business people, parents – but those most responsible are the students, themselves.

Over the last few months a word has entered my students’ vocabulary that hadn’t been there before: Fortnite.

It’s not that they’re so interested in an antiquated term for a two-week period. It’s the name of a popular multiplayer on-line shoot-em-up video game for PlayStation 4, Xbox One, Windows, and Mac. Players build forts with teammates to defend against other players or enemies.

Apparently, many of my students got it for Christmas. Or since there’s a free on-line version, they were turned on to it by others who had gotten the deluxe version as a present.

And then it started to manifest physically.

Those same kids would come in to school with Fortnite Face – glassy red eyes, heads slumped on the table and the inability to stay awake for more than 10 minutes at a time.

It’s not all of my students, but it’s a significant percentage. Almost all boys. And almost all at a distinct learning disadvantage.

Teaching them is like teaching someone in a deep sea diver suit. They can’t really see or hear you very well. And any message you get back from them sounds like it’s coming from the bottom of the ocean.

When I noticed it, I cleared as much of my schedule as I could to call parents. It’s hard because administration decided not to fill positions in my department for teachers who retired last year – so all our classes are larger. And they gave me a new class I haven’t taught in years so the planning load is more cumbersome.

Plus I have as many special education students as legally allowed in every class, which requires mountains of extra paperwork and monitoring for each child.

And of course the phone in my room doesn’t call out and the cell reception is terrible, so I have to move to one of the few phones that will actually allow me to contact parents and try to communicate my concerns.

Most parents I talked to noticed the same things I had. Fortnite was taking over their children’s lives. Their kids were playing the game at every opportunity and ignoring most everything else.

However, most parents I couldn’t reach. Those cricket burner phones get disconnected quick. Others go straight to a voicemail box that’s so full it won’t accept new messages. Others allow me to leave a message that will never be returned.

But sometimes I did get through. And sometimes parents didn’t simply throw up their hands and say they don’t know what to do. Sometimes a parent actually laid down ground rules or took the game away.

However, if I’m being honest, contacting parents did not solve my problem.

I’m not blaming them. Most of my students live below the poverty line. That means their folks are working two or three jobs just to make ends meet. Or they’re grandparents raising their sons’ or daughters’ kids. Or they’re foster parents with a full house.

They’re doing the best they can. But it doesn’t end up stopping the addiction.

For the first time in 2018, the World Health Organization recognized video game addiction as a real thing. Not every video game. Not every time someone sits down to play a video game. But video games can lead to addictive behavior.

That’s what I’m seeing in my students.

So after talking with as many parents as I could, I came to a mostly dead end.

My next step was to try to use student interests to influence instruction.

We were in the middle of a poetry writing unit. So I allowed students to write their poems about Fortnite.

That perked up a few heads.

Here’s a cinquain about Fortnite. Here’s an acrostic, a narrative, a concrete poem in the shape of a soldier or his gun.

To be honest, none of them were masterpieces.

They were just the normal trash talk and braggadocio written down in verse.

So I got an idea. Use the heightened competitive urge to push artistry.

We came to limericks – a difficult but fun type of poetry with five lines, a specific rhyme scheme and meter.

With one twist. Whoever wrote the best limerick would get a homework pass.

All of my Fortniters perked up.

Each wanted to one-up the others. And no one wrote about the game.

By the end of class, we had some pretty good poems. I wouldn’t say they are the best ever written, but they were miles better than where we were before.

So what does it all mean?

When we talk about video games these days, the conversation usually strays toward violence.

Pundits caution that video games will desensitize children and make them more prone to aggression and acting out. It might even contribute to the creation of school shooters.

In general, video games don’t make children more violent. Fortnite is a game where students shoot each other with guns all night long and it hasn’t made my students any more aggressive or violent than they already were.

Many cultures like the Japanese are much more into video games than ours and they have fewer violent incidents or school shootings.

However, video game addiction is a real thing and it impacts learning.

Some corporations want to try to harness this addiction to push learning. Hence the move to personalized or competency based education. That’s pure rubbish.

It’s a way to monetize education without paying attention to what’s best for kids. The same with gamification – using game theory to drive instruction.

And don’t think I’ve lost sight of my own use of competition in class. I haven’t.

Games and competition can be used to positive ends in moderation.

It needs to be a novelty. Any tool can be overused.

Even video games aren’t bad in moderation. I used to be a gamer, myself.

The problem is when it becomes an addiction.

Our social structures can’t handle it.

Game corporations only care if it makes money. Parents are often stressed to the limit just to provide the basics.

The only group we require to be responsible is teachers.

And that’s just not going to work.

Video game addiction is another area where it becomes painfully clear how much work we all need to do to help our children succeed.