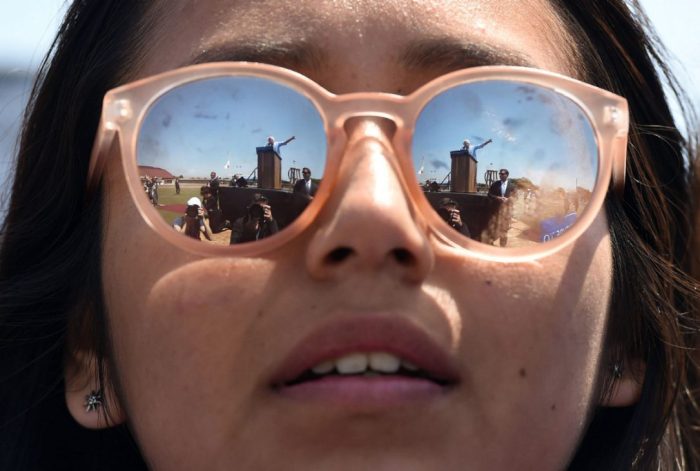 So we lost the Democratic primary.

Bernie Sanders is out and Hillary Clinton is in. She will almost definitely face Donald Trump in the general election for President.

Exit polls consistently showed him winning, but when the votes were counted, he ended up losing.

There have been consistent reports of rampant tampering with voter registration resulting in hundreds of thousands of voters being removed from the rolls; party affiliations being changed without voter consent so they cannot cast a ballot; polling places being reduced significantly so voters have to wait for hours resulting in voters leaving before casting a ballot. And that’s not even counting the mainstream media’s portrayal of Clinton as inevitable by conflating superdelegate votes (which at this point are only non-binding polls of how these party insiders MIGHT vote in July) with actual votes that are already tallied and unchangable.

Really it shouldn’t be so shocking.

Our democracy has been a smoking shell of itself for a long time now.

In 2008 when Barack Obama beat John McCain, we saw some of these same shenanigans. We had language barriers, invented rules, long lines sometimes hours long, and, in some cases, voting machines that changed people’s votes.

By the end of election night, hours after victory was declared, Obama said to supporters in Chicago, “I want to thank every American who participated in this election. Whether you voted for the first time or waited in line for a very long time.” As the crowd roared, Obama declared: “By the way, we have to fix that.”

And now eight years later, we’ve done absolutely nothing to “fix that.”

If anything, the situation is much worse. While Obama voters met hardships, just as Al Gore supporters did in 2000, those were extra-party elections. They were examples of Republicans disenfranchising Democrats. But now we have something new – Democrats suppressing other Democrats!

From the beginning Sanders has said that his campaign was not about himself, it was about starting a real progressive movement. “Not me, us,” the slogan goes.

Now is the time to start cashing in on that idealism.

While Hillary supporters call for unity, we, Berners, must push the terms.

I don’t know if there is truly anything Clinton can do to get my vote short of stepping down. Like many Berners, the very idea of supporting someone so opposed to my views is repugnant. But if Clinton is going to have any shot, she and her supporters need to agree to finally fulfill Obama’s promise.

It’s not like it’s any big secret how to do so.

Robert Steele, Jim Turner, Ralph Nader, Christina Tobin, Howard Zinn and a host of others have had available a series of common sense reforms for almost two decades. It’s time we push the Democrats to get behind them:

1) Open Ballot Access. Historically, third party candidates have had a harder time getting on the ballot than Democrats and Republicans. Even the popular Green Party Presidential candidate Dr. Jill Stein isn’t on the ballot in every state.

Open ballot access means that no matter what party a candidate represents, he/she has to do the same things to get on the ballot. No more can we accept only Democrats and Republicans to be on the ballot in every state. Ballot access requirements should be the same for every candidate, irrespective of party affiliation. This should also apply to initiatives and referenda, as well as primary and general elections.

2) Holiday Voting. Voter turnout in the land of the free is a disgrace. Much of that has to do with the fact that people are working too hard and too long to easily get to the polls. Election Day should be a national holiday. This way every voter should be able to vote easily and won’t have to worry about missing work and/or transportation issues. In addition, Early Voting should be universally available. No long lines. Vote at your leisure and even spend some time getting involved in the political process.

3) Paper Trail. ALL ballots must either be on paper or otherwise subject to physical re-count. It is too easy for votes to be miscalculated without any reliable recourse for reasonable challenges and/or recounts if there is no paper trail. Too many voting machines in use do not meet this standard. If voting machines are used, each vote must produce a physical paper footprint subject to recount. If there is any attempt at voter suppression, it should be easily provable and remedied.

4) Honest Open Debates. Americans demand choice in almost everything in their lives except politics. Go to the grocery store and there are 20 different kinds of frosted flakes, but go to the polls and you only have the choice of Dems or Repubs. Another way to end the current monopoly of the major parties is to mandate debates include all political parties – even third, fourth, and fifth parties.

5) Tightly-Drawn Districts. We must end the corrupt practice of gerrymandering, replacing it with compact computer drawn districts determined by independent non-partisan commissions. And we should expressly prohibited any voting district to be drawn to favor or disfavor an incumbent or political party.

6) Full Public Funding of Diverse Candidates. Get the money out of politics. Eliminate all corporate financing of campaigns, and all political action committees. No more PACS, Super PACS, Citizens United, all of it! Instead all state and national campaigns should only be publicly funded.

7) No Legislation Without Consultation. The most frustrating things for voters is when politicians pass legislation without reading it first. The next most frustrating thing is that this legislation isn’t easily available or accessible to their constituents. We can eliminate special interest dominance of the legislative process, by ending the practice of passing legislation such as the Patriot Act without its actually being read. Moreover, end all earmarks. All legislation without exception should be published on line with an easy to understand one-page summary, one week prior to its coming to a vote, to include explicit geospatial pointers for all “earmarks” each of which must be publicly announced and offered for amendment to the voters in the relevant district at least one week prior to the passage of national, state, or county legislation affecting them. Similarly, no public privileges should be granted to any corporation or other entity without full public consultation and public polling or balloting.

8) End the Electoral College, Superdelegates and every representative voting system where possible. When you go to vote for something that should be it. You’re not voting for someone else to vote for you. You’re voting for that candidate outright. Yes, our system of Republican government essentially involves people voting for us. But we don’t need to add extra levels of distance between us and our representatives. Eliminate the middleman. Eliminate the possibility of further disenfranchisement.

There are certainly other reforms we can add to this list. I do not mean it to be exhaustive. But I do think it represents a good start.

And we mustn’t wait. We need to push for it NOW!

Millions of people have just had their votes stolen from them. Clinton and the Democrats are calling out for unity.

Okay. If you want even the possibility of it, prove you’re on our side. Work with us to ensure that people like you can never again gain power in the manner that you just did.

If you want my vote, respect it.

Otherwise, I’ll just give it to someone else.

Dr. Stein, are you with me?