Skip to content
HomeBernie Sanders is Right: We Should Federalize Public School Funding 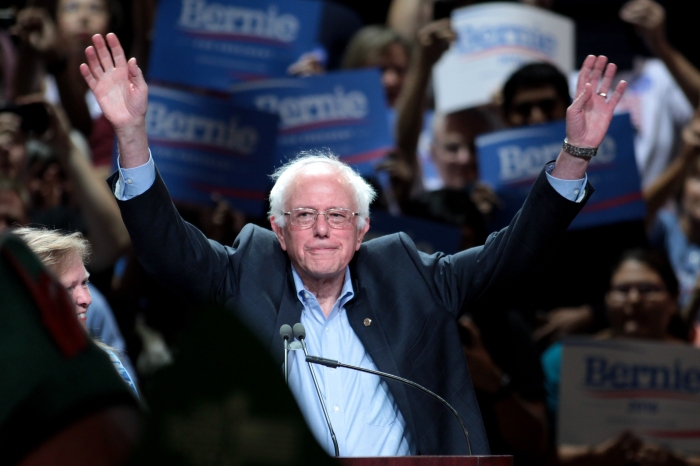 Bernie Sanders just dropped a massive dose of truth on us Monday night.

No politician in my lifetime has ever said anything so dangerous, fraught with problems, unlikely, impractical, and absolutely on the nose right!

This is what he said:

“One of the things that I have always believed is that, in terms of education, we have to break our dependency on the property tax, because what happens is the wealthiest suburbs can in fact have great schools but poor, inner-city schools cannot. So I think we need equality in terms of how we fund education, and to make sure the federal government plays an active role to make sure that those schools who need it the most get the funds that they deserve.”

(Find the quote above 17 minutes into this video.)

Wow! What a statement!

Whether you agree with it or not, such an audacious remark has to come from a genuine belief. This is really what Bernie thinks, and it’s entirely consistent with the Democratic Socialism of his whole political career.

I don’t think his rival for the party’s nomination, Hillary Clinton, will be parroting THIS stance! If anything, she might criticize him for it. And she’d have a multitude of practical reasons to do so.

Lots of folks on both sides of the aisle are sick of federal intervention in our schools. No Child Left Behind was a disaster. Race to the Top was worse. And the just passed Every Student Succeeds Act (ESSA) amounts to a massive giveback of power to the states. Under the most popular interpretation, the reauthorization of the federal law governing K-12 schools makes the states responsible for filling in the details of education policy while limiting federal interventions.

And now Bernie is suggesting the Fed foot the bill!?

That is going against the political tide. Who would vote for such a thing? Probably not Hillary. Or any of the Republican candidates. Or more than a handful in Congress, either.

But it’s exactly the right thing to do.

Nationwide, state and local governments spend 15 percent less per pupil on poor school districts. I see this first hand. My home state of Pennsylvania is the worst offender, providing the poorest districts an embarrassing 33.5 percent less per student. This means higher class sizes, less teachers, less arts and humanities, less electives, less nurses, guidance councilors and wrap around services. This is the reality in 23 states.

An additional 23 states do buck this trend with more progressive funding formulas. States like California and Florida actually provide MORE spending to poor districts. This helps heal the wounds of malnutrition, violence, family instability and a host of other problems that go hand-in-hand with generational poverty. It also offset the costs of greater numbers of special education students and English Language Learners you typically find in these districts.

You might say, then, that the states where poor children get shafted could simply follow the lead of their more enlightened neighbors. Good luck with that! Rich folks rarely volunteer to subsidize the poor. They got theirs, and they vote and donate more regularly to local politicians than their indigent brethren can afford to do.

The result is a funding system based on local wealth. Rich areas have Cadillac education systems. Poor areas have dilapidated ones. That’s demonstrably unfair and leads to worse academic outcomes for needy kids.

What’s worse, no one else runs their schools this way. The U.S. is one of the only countries in the world – if not probably the ONLY country – that funds schools based largely on local taxes. Other developed nations either equalize funding or provide extra money for kids in need. In the Netherlands, for example, national funding is provided to all schools based on the number of pupils enrolled. But for every guilder allocated to a middle-class Dutch child, 1.25 guilders are allocated for a lower-class child and 1.9 guilders for a minority child – exactly the opposite of the situation in the U.S.

Federalizing education funding could solve all these problems. It could set the groundwork for an even playing field. All students could get a fair start in life! That’s a goal worth shooting for! And that’s what Bernie is suggesting.

But it’s an incredibly dangerous proposal.

Our school system still suffers nationwide from the effects of corporate education reform. National policy has been and continues to be one of high stakes standardized testing, poorly conceived and untested academic standards, and a push to privatize struggling schools. Corporatists call this “Accountability.”

It goes something like this: raise your test scores or we’re closing your school and turning it into a for-profit charter. Adopt these academic standards written by the testing companies and we’ll give you a couple extra bucks. De-professionalize teachers with junk science evaluations and hiring under-trained Teach for America temps or else we’ll cut your funding.

THIS is the federal legacy in education, and Bernie is suggesting we give them MORE POWER!?

Yes, and no. I can’t speak for Bernie, but that’s certainly not how this has to go. We can increase the Fed’s responsibility for funding schools without increasing its power over education policy. In my view, education decisions should be made locally, and I don’t mean at the state legislature. Decisions about how best to run schools should be made at the district level by the experts – the teachers and parents.

Certainly there will be those who call for more federal power over policy as a condition of federalized funding. But that has to be a deal breaker. Equitable funding with inequitable policy would just be plugging one hole while making another.

In my view, equitable funding IS the role of the federal government in public education. When the Elementary and Secondary Education Act (ESEA) was first passed in 1965, it’s purpose was to make sure all schools were getting adequate resources. Under Bush and Obama, that became perverted to mean more standardized tests and philanthro-capitalist interventions. Bernie’s suggestion could be a step in returning to the original intent of the law.

Yes, the Fed should be engaged in accountability. It should make sure it’s funding schools properly. Maybe it should even be responsible to make sure those funds are being spent on things that broadly can be construed as education. I don’t mean that the fed should be able to withhold monies from districts with low test scores. But maybe it can prosecute administrators who use funding to lavishly redecorate their offices or who neglect the needs of students in their districts.

However, even if you agree – as I do – that this is a lofty goal, it is almost impossible to achieve. It’s like single-payer healthcare was in the ‘80s and ‘90s. This is what most of the world is doing but it was completely out of reach here politically. In fact, we still don’t have it, but look at how the landscape has changed. Obamacare is not-single payer, but it is a step in that direction. Bernie is even championing going that extra step and providing a medicare like system for all.

What seemed impossible decades ago, now seems within reach. The same may be true one day with federalized education funding.

To be honest, I doubt fixing our school funding system is high on Bernie’s list of things to do. Breaking up the big banks, overturning Citizens United, free college tuition, even healthcare probably come first. And maybe that’s not a bad thing. If any or all of these goals were realized, it would help the more than half of our public school children living in poverty. Moreover, just having equitable funding on the list with these other worthy goals puts it on the national agenda.

Right now, no one else is talking about this. It isn’t even a recognizable goal for most progressives. Frankly, I doubt many people have even thought about it. By bringing this up, Bernie is forcing us to do so.

When I first became an education activist, I thought I was doing it for my students. Then we had a daughter, and I thought I was doing it for her, too. But as the years have gone by, the landscape has changed only slightly. We’re still reaching a level of critical mass when the culture demands a major shift. We’re not there yet. So now I wonder if the people I’m really doing this for are my grandchildren.

One day we may have the courage to change the course of our education system. We may gain the nerve to actually accomplish our convictions. We might actually try to have a nation with liberty and justice for all.

That’s what I’m fighting to achieve. I think many of us are doing the same. But do we have the bravery to take Bernie at his word, to push this topic onto the national stage?

A Bernie Sanders presidency would do that. It might not achieve this lofty goal. Not now. The political winds aren’t favorable. But we can try, knowing full well the dangers and the improbability.

I wish Bernie would flesh out the details of his plan. I wish he’d exorcise the devil from the details. But the very fact that he has the intrepidity to offer this as a solution fills me with hope.

Is it hot in here or am I starting to Feel the Bern?

37 thoughts on “Bernie Sanders is Right: We Should Federalize Public School Funding”