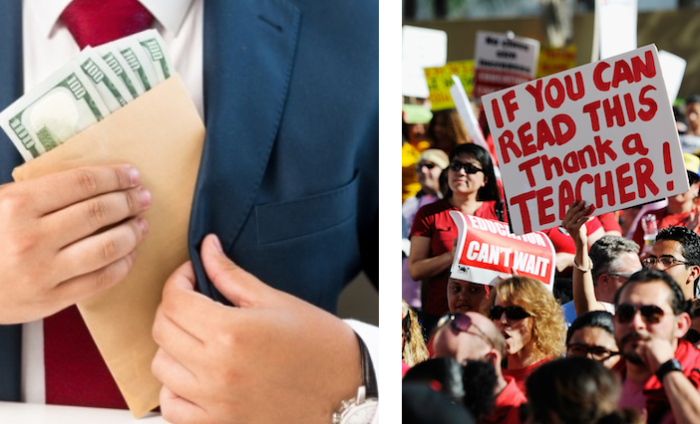 Everyone claims to be grassroots.

We’re the ordinary people – they say – the Hoi Polloi, the everyday Joes and Janes who make the world go round.

Which is to say we’re NOT the wealthy elite who get what they want simply by buying lawmakers and the political process.

You’d think the plutocrats wouldn’t even bother hiding. After all, it should be pretty obvious who is who.

One group has barrels full of cash. The other has numbers. However, our laws are written to obscure exactly how much money any one side has. And if you have money, you can use it to buy bodies to line up on your side and “prove” you have numbers.

It’s kind of a ridiculous question to ask, when you come to think of it.

One side actively lobbies for big business and huge corporations to take over local schools and districts. The other supports neighborhood schools.

One side pushes for schools to be striped of local control and instead to be managed by private equity firms and corporate officers. The other supports democratically elected school boards.

One side demands taxpayer dollars be available as profit that they can pocket and spend on mansions, yachts and jewelry. The other fights for transparency and for all taxpayer funds to be used in the service of educating children.

It’s the public school advocates who represent the common people. They are literally an extension of the masses struggle to reassert control over their lives and our society. Not those looking to raid our public services for fun and profit!

People get kind of upset when you try to do that. So when the villagers show up with torches and pitchforks, it does little good to argue that money equals speech. Better for the aristocrats to disguise themselves in peasant garb.

She wants to convince you she’s the real underdog grassroots champion.

As Chief Executive Officer and Founder of the Center for Education Reform, she’s spent most of her career lobbying for public schools to be gobbled up by private enterprise.

So when the folks behind a new documentary about school privatization, “Backpack Full of Cash,” had the gall to cast her and her organization as the bad guy, she did what any grassroots activist would – she called the Hollywood Reporter.

Why would anyone be against charter and voucher schools, she whined. They just suck away necessary funds from the already underfunded neighborhood school so that businesspeople can play with your tax money. They just cut services for children and parents while miraculously transforming the savings into yummy profit.

I can’t imagine why anyone is calling her out. Can you?

But perhaps the most pernicious aspect of her argument is monetary.

Allen, the Center for Education Reform and the entire corporate education reform movement are the real grassroots, she says, because they are outspent by the opposition.

By which she means teachers unions. As if the overwhelming majority of parents, students, social scientists, civil rights activists and concerned citizens somehow didn’t count.

“The people praised in the film” (i.e. public school teachers) “get paid from taxpayer dollars,” Allen told the Hollywood Reporter, as if the people the film criticizes (charter and voucher operators) don’t also get paid from the same pot.

“The teachers unions spend $300 million a year on political races. We don’t have that kind of money.”

Are those pushing for corporate control of our schools really unable to match the monetary might of the big bad teachers unions?

Well, first let’s examine the number Allen bandies about as if it were fact.

$300 million. Do teachers unions actually spend that much annually on political races?

It’s doubtful. The entire operating budget for the National Education Association (NEA), the largest teachers union in the country, is only $367 million. And the union does an awful lot besides lobby lawmakers for pro-education public policy. It raises funds for scholarships, conducts professional development workshops, bargains contracts for school employees, files legal action on behalf of teachers to protect their rights, and partners with other education organizations to promote sound educational practices. Political lobbying is an important part of what unions do, but if they spent what they’re accused of spending on it – even if you include other unions like the American Federation of Teachers (AFT) – they couldn’t do the rest of what they do.

It turns out the figure Allen uses is a stale conservative talking point that Poltifact, a non-partisan fact checking Website, rated as false.

It’s based on a funding target the unions had for the 2008 election of which the unions fell short by almost a third. But now right-wingers and anti-labor trolls everywhere are married to that number and quote it as if it were fact.

In the real world, where Fox News talking points aren’t accepted without question, it’s increasingly difficult to determine exactly how much organizations spend on politics. But it’s incredibly doubtful teachers unions have the monetary might attributed to them by corporate school reformers.

And speaking of those who fight on behalf of poor beleaguered corporate America, how much do THEY have to spend fighting public schools?

This duo runs one of the largest privately held companies in the United States: Koch Industries. It is involved in petroleum, chemicals, natural gas, plastics, paper and ranching. In 2013, Forbes said it had an annual revenue of $115 billion.

That’s an incredible amount of resources they can draw on every year when compared to teachers unions. The NEA would have to bring in more than three times its annual revenue to even come close to matching 1% of the Koch’s annual pay.

And do the Kochs spend on politics? You BET they do!

In 2012, alone, they spent at least $407 million on Mitt Romeny’s Presidential campaign! Yes, just that one campaign! They spent more on others! But even if we limit it there, that’s more than even the most absurd estimates of teacher’s unions political spending.

And they’re only two people!

Even if teachers unions spent $300 million, that only comes to less than $67 per member.

A quick look at Allen’s backers at the Center for Education Reform includes some of the richest people on Earth including: Bill and Melinda Gates, the Walton Family and Eli Broad.

And this woman has the nerve to cry poor in comparison to the big bad teachers!

Herself, she draws a six-figure salary as the organization’s President Emeritus – well more than the overwhelming majority of teachers.

But you’ll still find corporate reformers who contest this analysis with creative accounting. They’ll give you a spreadsheet with hundreds of millions of union dollars laid bare compared with a handful of poor billionaires who just can’t scrape together enough change in the couch cushions. And to do so, they’ll hide the super richs’ donations to super PACs or exclude dark money contributions, etc.

Look, I’m not saying our campaign finance system is perfect. In fact, it’s pretty messed up.

I am the first person to advocate for getting money out of politics. No more defining money as speech. One person, one vote.

But you must realize, the super wealthy don’t want that. More than anything else it would exponentially increase the power of the unions and the middle class from which they come. Not to mention their allies – the parents, students, child advocates, etc.

You really don’t need a detailed analysis of each group’s relative financial worth. You just have to look at who is in each group.

Which group do you think truly represents the grassroots?

Which group is an authentic demonstration of the will of the people?

And which is emblematic of the arrogant, hypocritical wealth class demanding we all bow down to the power of their pocketbooks?