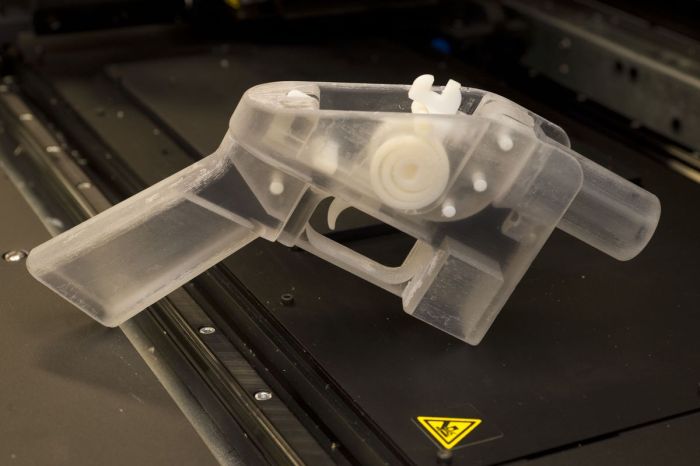 In the United States, we literally have more guns than people.

Yet we’re trying really hard to make even more available with the touch of a button.

It’s not enough that our right to kill is better protected than our right to live, we need to make it EASIER to commit murder. In the land of the drive-by shooting, slaughter needs to be as convenient as ordering a pizza.

Cody Wilson, a wannabe terrorist who apparently believes John Wayne westerns are documentaries, claims to have invented the first gun that can be made almost completely on a 3D printer. And he wants to post the plans on-line so anyone with access to the device can make one.

He was stopped by a U.S. District judge in Seattle who temporarily banned the plans from publication on the Internet this week following a last-minute lawsuit filed by seven state attorneys general.

They argued that 3D-printed firearms would be invisible to metal detectors and could bypass gun restrictions recently adopted after a string of school shootings in some states.

The issue will go back to court on August 10, when the sides will discuss whether a preliminary injunction is needed.

The whole matter was almost settled in 2013 when the Obama administration originally stopped Wilson from putting his plans online with a lawsuit. After years of back and forth, the federal case against the virtual arms merchant seemed like a slam dunk. Then Donald Trump came into office and not only stopped the suit but paid Wilson $40,000 in damages.

So the question remains – why would any sane human being want to post a do-it-yourself gun kit on the Internet where any criminal, psychotic or violent fanatic could easily access it?

Wilson says he’s not in it for financial gain. He wants to make a political point – to flood the world with so many cheap, untraceable guns that the idea of passing any kind of regulations on them would be impossible.

As he told Wired:

“All this Parkland stuff, the students, all these dreams of ‘common sense gun reforms’? No. The Internet will serve guns, the gun is downloadable. No amount of petitions or die-ins or anything else can change that.”

Not only that, but the owner and founder of Defense Distributed, an Austin, Texas, based start up that pretends to be a nonprofit organization, says he is prepared to kill police and federal agents if the courts don’t continue seeing things his way.

In the same Wired interview, he says he wasn’t expecting support from the Trump administration. He expected Hillary Clinton would win the White House in 2016 and that she would continue to oppose his 3D printed firearms.

“If that happened, as Wilson tells it, he was ready to launch his [3D printed gun] repository, regardless of the outcome of his lawsuit, and then defend it in an armed standoff. “I’d call a militia out to defend the server, Bundy-style,” Wilson says calmly, in the first overt mention of planned armed violence I’ve ever heard him make. “Our only option was to build an infrastructure where we had one final suicidal mission, where we dumped everything into the Internet,” Wilson says.”

So let’s be clear about one thing – the guy pushing for 3D printed firearms is literally a terrorist imitator.

He is an American extremist. He is to us as Osama bin Laden is to mainstream Muslims.

Or at least he wants to be that.

While we’re rounding up brown people and separating them from their children without any workable plan to reunite them on this or that side of the border, we have a US citizen making terroristic threats with the means to carry them out and he’s walking around free.

Oh, but he’s a privileged white dude, so no harm no foul.

It’s hard to make a 3D-printed gun. You need an expensive, top-of-the-line 3D printer and some knowledge of how to work it. And even then the result is a shoddy firearm at best. It may only fire a few bullets before falling apart.

A shooter would have to work extra hard to accomplish his goal with Wilson’s design. It would be much easier to use one of the billions of firearms already available – and much more deadly.

But it wouldn’t take much to make a 3D-printed gun more dangerous.

To comply with federal law, Wilson’s design requires a metal firing pin, which he claims would set off a metal detector. However, it may be relatively easy to bypass that metal part to make his design truly concealable from such devices.

Moreover, technology is always advancing – 3D printers will probably be able to create stronger and more deadly firearms in time. With these sorts of designs readily available, it is easy to imagine a school shooter accessing a device in a tech or computer lab and creating a weapon of mass destruction. He wouldn’t set off any alarms because he wouldn’t have the gun when he entered the building. He’d make it in school.

Some shrug at these dangers saying that they’re inevitable.

Even if we stop Wilson, these sorts of designs will eventually be available in some form on-line. That’s the double-edged sword of mass media – all information is available including easy ways to kill a large number of people.

However, I think this is a cop-out.

For instance, the Internet and computer technology make it fairly easy to mass produce currency as well as firearms. In fact, it’s theoretically much easier.

Yet we don’t see a major influx of counterfeit bills. The reason? Business and industry have collaborated with government to make sure this doesn’t happen.

Programs like Adobe Photoshop include software that restrict the printing of your own money. We could do the same with future 3D printers. We could recall those already in service and retrofit them with such code.

Oh, sure not everyone will comply. There will always be someone who breaks through the safety net. But if all we can do is greatly reduce the spread of 3D-printed firearms, that doesn’t make it futile.

There is a mountain of research proving that the more firearms you have in a country, the greater the number of firearm deaths.

We should be working to restrict guns to responsible people.

But the Wilson’s of the world don’t want to allow us that choice.

They want to force us all to live in a world where guns are even more pernicious than they are today.

Will we let them?

Human beings have such potential, but we seem determined to kill ourselves.

If intelligent aliens came to Earth today and landed in the USA, what would they think of us?

Would they see what we might become or would they only see a pitiful animal struggling to put itself out of its own misery?