Skip to content
HomePennsylvania’s Zombie School Voucher Bill is Back! And It Wants Your Tax Dollars! 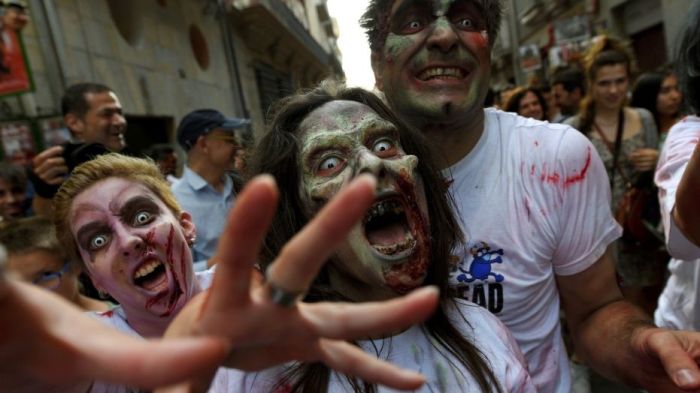 First, there was the horror of a School Voucher Bill.

No one wanted it.

It robbed kids of a quality education. It violated the Constitution. And raised taxes.

So it was soundly defeated.

Then there was Bride of the Voucher Bill.

And it likewise went down in flames.

This was soon followed by Son of the Voucher Bill.

Return of the Voucher Bill.

School Vouchers from the Black Lagoon.

And a host of B-grade legislation straight from the desk of a billionaire think tank to Harrisburg.

All ended up in the same place – the legislative graveyard. Oooh! Scary!

Now we have the latest shambling zombie iteration of a voucher bill, called Senate Bill 2.

Yesterday, after years of false starts and political wheeling and dealing, it’s finally been voted out of the Education Committee.

Which means it will come to a vote by the state Senate and then the state House.

And who do we have to thank for yet another version of legislation billionaires insist we need but voters don’t want?
These guys:

All Republicans. All bought and paid for by wealthy oligarchs. All convinced that we need to give School Vouchers yet another try in the Keystone state.

And who voted against letting the monster out once again? These guys:

This time the beast has a new look – something called Education Savings Accounts (ESAs).

Oh great. Another way to siphon off hundreds of millions of dollars in taxpayer money from the public schools serving 90% of the state’s students.

Just what we need. A boondoggle for private businesses and religious schools.

Will there be any way to make sure the money in these education savings accounts is going to the right place or is being used to help kids learn?

These schools will be able to grab your tax money and use it just about however they please with little to no oversight.

Thanks a lot, so-called fiscal conservatives.

And guess who gets to pay the bill? YOU DO!

Watch property taxes increase to make up the shortfall in funding so your local public school can have the privilege of continuing to operate.

I wouldn’t mind more of my taxes going to public schools that are run democratically, are held accountable and teach things in the American mainstream.

But – call me crazy – I don’t want my money going to help indoctrinate the next generation of zealots who deny science, deny history, and deny the moral standards of our society.

Will not on my dime, Buster.

“Congress shall make no law respecting an establishment of religion, or prohibiting the free exercise thereof…”

It’s the establishment clause from the First Amendment. And if you need to wipe your ass with something, it certainly won’t be the U.S. Constitution!

Separation of church and state. Keep them separate.

This law would allow many of the rich kids who already attend private and religious schools to be subsidized by taxpayers.

It would rob us of hundreds of millions of dollars ($500 million at last estimate) that we need just to keep our public schools where they’re at!

Moreover, school vouchers are nothing new.

We’ve been trying this crap for years and they haven’t done a thing to help students learn.

Three out of the four most recent studies on voucher programs, which examined the nation’s largest and oldest voucher strategies in Washington DC, Indiana, Ohio and Louisiana, all show student performance getting worse or not improving at all with vouchers.

A 2017 report from the Economic Policy Institute concluded that extensive research on vouchers over the past quarter century demonstrates that gains in student achievement – if present at all – are at best small. Students show no significant improvement in reading or math. In addition, the report showed that the risks outweigh any insignificant gains in test scores.

Another report from June 2017 by the US Dept of ED found that students using a voucher had statistically significant lower performance in math compared to students who did not receive a voucher.

And THIS is what a gaggle of ideologues want to increase in the Commonwealth!?

Look. The problem with our public schools is poverty. Pure and simple.

Giving out vouchers to private and parochial schools won’t help. It just hides the problem and makes it worse.

Most of the lowest-performing schools are in high poverty districts that are already struggling financially and cannot afford even less funding.

Poverty has a significant impact in student achievement. The average acute poverty rate (% of children living in families with income less than 100% of federal poverty limits) in school districts with more than one low-achieving school was 33.3% – more than double the state average of 16.3%.

On average, the proficiency rate for students in the highest poverty schools is 33% less than students in the wealthiest districts. Struggling schools need MORE resources – not less.

Yet, the highest poverty school districts receive more than $2,000 less per student than their wealthy counterparts. This means they are unable to make the investments necessary to overcome the barriers posed by being poor in America.

Diverting state subsidies from these school districts, to ESA vouchers reduce fair access to educational opportunities for these students.

Despite what voucher proponents think, this does not “Save Money.” It does not force struggling districts to do more with less. It forces them to do less – or get more.

Schools don’t budget or spend money on a per student basis. Fixed costs remain the same regardless of how many students are led away by the pied piper of school vouchers.

Vouchers result in no savings. They produce a greater financial burden for local taxpayers. With less in state funding to provide the same education, that money would have to be raised from other sources – namely, YOU and your local taxes!

I know this is all very tiresome.

It seems like any positive legislation is impossible to get through Harrisburg, but garbage like Senate Bill 2 is ubiquitous.

How many times have we defeated this voucher nonsense?

How many times have taxpayers made it clear they don’t want to fund this nonsense?

But it doesn’t matter. Like a spoiled child, ideologues keep bringing it up again and again in the hopes that this time they’ll wear us down and we’ll let this terrible legislation pass.

Vouchers can be defeated a hundred times. All it takes is one victory and it becomes law and much more difficult to expunge.

So please call, write and visit your state senator and representative.

Tell them you’re against the latest horror show voucher monstrosity.

And maybe when you’re at the polls remember the names of the tools who keep making you repeat yourself.

Give them an unequivocal answer by voting them out of office.

Only then do we stand a chance of nailing a stake through vouchers’ undead heart – for good.

5 thoughts on “Pennsylvania’s Zombie School Voucher Bill is Back! And It Wants Your Tax Dollars!”