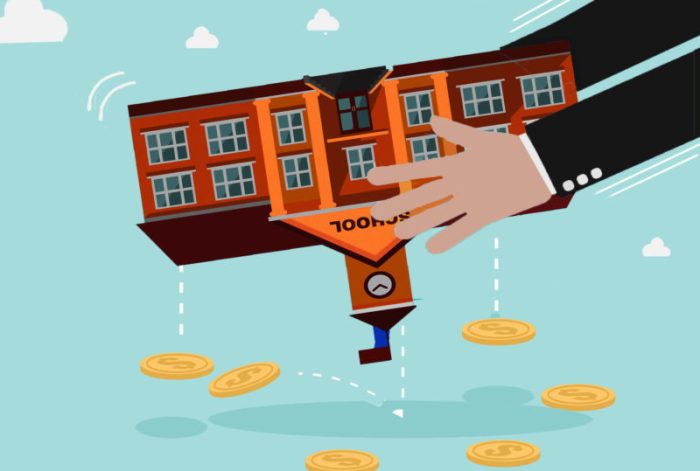 Close your eyes and imagine a school like the one where I teach.

Now imagine that the state passes a school voucher bill.

A truckload of taxpayer wealth would be redistributed away from the public school and into the religious one.

And this is for children who weren’t attending public school in the first place.

Imagine what an impact that would have on the two schools. At the Catholic middle school, not much would change. At most a few more kids might enroll. And wealthy parents would get to pay less in tuition.

At the public middle school, however, the results would be disastrous. It would have to survive on much less funding than it was already receiving. Services for the majority of students in the district would be degraded. Class sizes would balloon. Educational quality would take a nose dive.

So why wouldn’t more kids from the public school move to the Catholic one?

Well, first of all, few kids in the district are Catholic. Should they be forced to be indoctrinated in a faith in which they don’t believe?

THIS is the situation the Pennsylvania Education Committee will vote on tomorrow.

The committee will decide whether State Sen. John DiSanto’s school voucher bill should be voted on by the state Senate and House.

School vouchers are not popular at both the national and state level.

Around 70% of people across the country oppose school vouchers, according to the PDK-Gallup public opinion poll about U.S. education.

Moreover, Harrisburg wastepaper baskets are lined with school voucher bills that fail to pass despite being introduced every few years.

It’s almost exactly the same as a pile of similar bills offered by the American Legislative Exchange Council (ALEC).

They designate some group of at risk students and say, “Hey, you know what they need? School vouchers!”

Well, my goodness. I’m sure glad DiSanto didn’t stress himself out writing something new. I’m certain his constituents wanted him to plagiarize someone else’s bill and pretend like it was his own.

Fools like DiSanto just pretend that it will help as a matter of faith. And since the overwhelming majority of school vouchers go to religious school coffers, this makes sense.

It is a blatant violation of the separation of church and state. But privatization supporters don’t give a crap about that. They don’t care about the values on which this country where founded. Their only concern is doing what their rich donors demand.

SB 2 would target students living in districts with the most underfunded schools serving the most impoverished populations. You know – “failing schools.”

If passed, kids living in these neighborhoods would have whatever the district sets aside for each student put in a savings account to be spent in almost any way parents see fit so long as they could somehow justify it as educational.

Send your kids to a private or parochial school?

Go on a trip to the life-sized replica of Noah’s Ark in Williamstown, Kentucky?

And the best part is there is hardly any accountability built in to the law, so we probably wouldn’t even know how this money was spent.

Your tax dollars at work. Somehow. Somewhere. Out of sight.

If passed, the bill would affect 800 schools – the 15% lowest performing in the state – including mine.

Pennsylvania ranks 45th out of 50 for school funding. There are only five states in the country where the state government pays less of the cost of educating students. The Commonwealth relies on local municipalities to make up the difference. That means local property taxes, so the richer an area you live in, the more money it can afford to pay to educate children. The poorer an area where you live, the less it can pay.

This is why Pennsylvania has the widest disparity between how much it spends on rich kids vs. poor ones. Wealthy children are cherished and coddled. Poor ones are left to fend for themselves.

This voucher bill would only exacerbate the situation.

It’s a giveaway to those who don’t need it at the expense of those who can least afford to pay.

If you live in the Commonwealth, please call and/or write your state Senator and Representative and ask them to oppose this bill.