Skip to content
HomeUnions Can’t Just Be About What We’re Allowed to Do: Social Justice Unionism 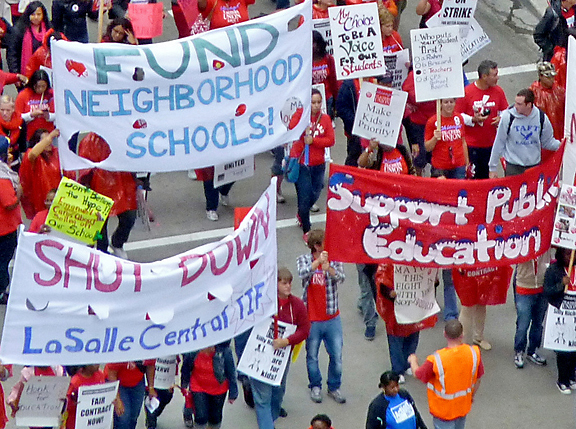 If labor unions were an animal, they’d be an old hound dog napping on the porch.

They’re slow to get up and chase away burglars but they do like to howl at night.

Most of the time you don’t even know they’re around until the dinner bell rings. Then that ancient mutt is first to bolt into the kitchen to find a place at the table.

It’s kind of sad really. That faithful old dog used to be really something in his youth.

He was fierce! He’d bark at trespassers even tearing them apart if they threatened his patch of land.

Old Uncle Sam used to yell at him and even threaten the pooch with a rolled up newspaper, but that dog didn’t care. He had a sense of right and wrong, and he didn’t mind getting into deep trouble fighting for what he thought was fair.

Today, however, the only thing that really riles him is if you threaten to take away his ratty old bone.

Let’s face it. Unions have become kind of tame. They’re housebroken and not much of a threat to those people waiting in the shadows to rob us blind.

Some people say we’d be better off without them. But I don’t agree. Even a decrepit canine can act as a deterrent, and thieves sure are frightened of dogs.

Think about all unions have given us: the weekend, child labor laws, vacation time, pensions, lunch breaks, healthcare, the 8-hour day, maternity leave, safety measures, due process, sick leave and free speech protections on the job!

Unions used to take to the streets. They took over the job site. They marched with signs and placards. They exercised people power.

And the government was scared of them. The President called out the army to get them back to work. Lawmakers hired mercenaries to break strikes with clubs and guns. But eventually Congress passed laws to placate them.

Unfortunately, That was a long time ago.

For decades we’ve heard to their propaganda on TV, the radio and the print media. Well-paid shills have poured their poison in our ears about the evils of the labor movement. They’ve spoken these lies so often lots of people believe them.

Workers used to fight to make sure everyone got a fair deal. Now the working man has been brainwashed to focus instead on making sure no one else gets more than him. And the bosses are laughing all the way to the bank.

Union membership is at the lowest it’s been in a century. So are wages adjusted for inflation. A family of four used to be able to get by comfortably on one salary. Now it can barely make ends meet with two.

Yes. There’s no doubt about it. We need unions today more than ever.

But for unions to survive, they must change. They have to become a reflection of the membership and not just of the leaders.

During this presidential election cycle, we’ve seen our largest national unions – the National Education Association (NEA) and American Federation of Teachers (AFT) endorsing a candidate without bothering to actively poll their members. We’ve seen them speak for us on policy decisions without asking our opinions. We’ve seen them act just like the corrupt politicians who we should be fighting against.

Yes, it is time for a change. No longer can our unions be run from the top down. They must be run from the bottom up. They shouldn’t tell us what to do. We, the membership, should be giving orders to them.

Moreover, we need to stop obsessing about collective bargaining. I’m not saying that’s unimportant. But it can’t be the only thing we do.

We need to continue that today. And in some places we are already doing that! Look to Chicago, Detroit and Philadelphia. Teachers unions in those urban areas are fighting not just for better pay and benefits but for the communities they serve. Detroit teachers en mass are calling off sick to protest horrible conditions in the schools. Chicago teachers are marching in the streets with the community to demand indictments for police murdering their black and brown students. Philadelphia teachers are supporting students who walk out of class to protest state disinvestment and toxic testing.

THIS is what unions should be doing. We should be fighting for social justice. We should be a central part of the struggle to turn the tide against corporatization, privatization and standardization of our country’s public goods. We should be marching hand-in-hand with BlackLivesMatter activists. We should be in the front lines of the fight to save our environment and replace fossil fuels with renewable energy.

We must be part of the community and not apart from it. We must share in the struggles and goals of those we serve. We must be an example of the old truism that a rising tide raises all ships. After all, the word “union” literally means together. By definition we must all be in this together or else we’re not even really a union.

And to do this we have to stop being so concerned with what they tell us we can do.

We live in a democratic society. The government gets its power from us, from our consent. That means that if there are enough of us, we trump their corrupt laws. They only get to make those laws because we say so. And court decisions – even Supreme Court decisions – mean nothing next to the court of public opinion.

How do we do it? Organize.

If you belong to a union, roll up your sleeves and get active. Run for office. Convince like-minded folks to join you. Take over your local. Spread to your national.

If you don’t belong to a union, start one at your job. Talk to your co-workers. Talk about the benefits for each of you and your neighborhoods. Fight for your rights.

We used to know these things. Somewhere along the line we forgot.

So wake up, you yeller cur dog, and get off the porch. Take to the streets.

23 thoughts on “Unions Can’t Just Be About What We’re Allowed to Do: Social Justice Unionism”