Skip to content
HomeMy Daughter is Not a Widget 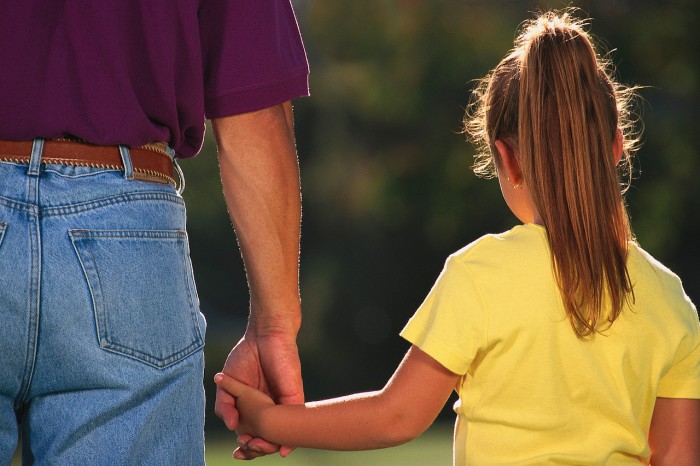 “I’m not sure public schools understand that we’re their customer—that we, the business community, are your customer. What they don’t understand is they are producing a product at the end of that high school graduation. Now is that product in a form that we, the customer, can use it? Or is it defective, and we’re not interested? American schools have got to step up the performance level—or they’re basically turning out defective products that have no future. Unfortunately, the defective products are human beings. So it’s really serious. It’s tragic. But that’s where we find ourselves today.”
–Rex Tillerson, ExxonMobil CEO

My daughter just turned seven during this holiday season.

She loves to draw. She’ll take over the dinning room table and call it her office. Over the course of a single hour, she can render a complete story with full color images supporting a handwritten plot.

These narratives usually star super heroes, cartoon characters and sometimes her mommy and daddy. In these flights of fantasy, I’ve traveled to worlds lit by distant suns, been a contestant on a Food Network cooking show, and even been a karate pupil to a Teenage Mutant Ninja Turtle sensei.

That little girl is my pride and joy. I love her more than anything else in this world.

Make no mistake – She is not anyone’s product.

Her value is not extrinsic. It is intrinsic.

She is a person with a head full of ideas, a heart full of creativity and passion. She has likes and dislikes. She loves, she lives, she dreams.

And somehow Tillerson, this engineer turned CEO, thinks she’s nothing more than a commercial resource to be consumed by Big Business. He thinks her entire worth as a human being can be reduced to her market value. It doesn’t matter what she desires for herself. It only matters if she fills a very narrow need set by corporate America.

But what else should we expect from the man in charge of ExxonMobil? The corporation has a history of scandal, corruption and malfeasance going back decades.

Since the 1980s the company has been suppressing its own incredibly accurate data on climate change because that science would adversely affect the bottom line of a business that earns its money burning fossil fuels. Moreover, the company funds climate change denial groups. A study by the US Union of Concerned Scientists reports that ExxonMobil funded 29 climate change denial groups in 2004 alone. Since 1990, the report says, the company has spent more than $19 million funding groups that promote their views through publications and Web sites that are not peer reviewed by the scientific community. Need we even mention the corporation’s long history with the American Legislative Exchange Council (ALEC)?

Tillerson and Exxon have also been major boosters of the fracking industry pushing for deregulation as health concerns mount. Most recently, the organization was ordered to pay a $100,000 Environmental Protection Agency civil penalty for an illegal discharge of fluids from a Marcellus Shale natural gas well site in Lycoming County, Pennsylvania.

It’s all about profit at Exxon. The corporation’s cost cutting measures also resulted in the largest oil spill in US waters to date. Environmental impacts are still being felt in Alaska’s Prince William Sound from the 11 million gallons of oil the Exxon Valdez supertanker unintentionally poured into the ocean, coasts and forests in 1989. Subsequent spills have occurred in Brooklyn (2007), the Yellowstone River (2011), Baton Rouge (2012), and Arkansas (2013). But why should that matter? The corporation was listed as the second most profitable in the world on the Fortune 500 in 2014.

Yet Tillerson is somehow worried about American workers being up to snuff? Why? The corporation outsources a steadily increasing share of its jobs overseas. Those that it does keep in the continental US have been subject to massive downsizing efforts. As employees have decreased, corporate profits have increased. And Tillerson expects anyone to think he’s concerned about the well-being of the American worker!? Give me a break! 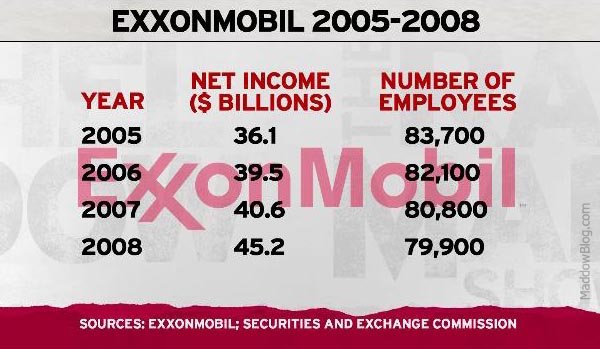 I suppose it’s not that surprising though that someone who makes $40 million a year, himself, would expect a paycheck to be the ultimate display of personal significance. After all, he probably thinks his exorbitant salary proves that he’s very important.

Albert Einstein never made that kind of money. Heck! Neither did William Shakespeare, Dr. Martin Luther King, Marie Curie, or Abraham Lincoln. So by Tillerson’s ethos, all of these people were defective products unfit for the corporate world. Or at the very least our estimation of them is flawed.

After all, what need have we of Shakespeare’s poetry in the exercise of buying and selling? Perhaps the greatest author ever to write in the English language might find merit in the advertising department. Likewise, Dr. King’s ethic of equality might be useful in human resources. Marie Curie? She’d find gainful employment in research and development but any patents she generated would undoubtedly be held in the corporate interest. And Mr. Lincoln? Perhaps he could be useful as a low level administrator but, no, such iconoclasm as he possessed would probably not be a good fit. He’d end up freeing the wage slaves or other such unprofitable nonsense.

Is this really the American Dream? Find an occupation producing monetary wealth or else lose all claims to value? If so, how loud must history be laughing at us?

The post-Impressionist artist Van Gogh created 900 paintings and 1,100 drawings and sketches. Many of these works now adorn museums around the globe and have forever changed the way we see the world. But during his lifetime, he sold only one painting. So by Tillerman’s logic, he was a defective product, a failure.

This is the sickness of the profiteer – to be forever appraising worth but unable to see true value. It is the disease eating away at the soul of our country. It’s the same mindset that justifies anything in the name of short-term gain – credit default swaps, the housing bubble, charter schools and Common Core.

After all, Tillerson’s notorious quote above comes from an infamous article in Fortune magazine in which the CEO threatened the former governor of Pennsylvania that he’d pull ExxonMobil out of the state if the legislature didn’t adopt some form of Common Core. And so the state gave in to the whim of one man with no experience, knowledge or wisdom about how children learn. And students in more than 500 public school districts are thus constrained by this legal economic blackmail.

I am but a simple man. I don’t bring in a six-figure salary. I’m a teacher in that same public school system. I’m also the father of an elementary student. I am a man of no monetary means and thus little merit. But I say this: the Tillersons of this world are wrong. Our children are worth more than these tiny bean counter brains realize. The purpose of education is not to provide more resources for their pointless game of Monopoly.

My daughter has a life, and her education is a tool to enrich that life. It is her vehicle of understanding the world around her. It is a process to invigorate her sense of wonder. It is a method of understanding how things work and where she fits in the universe.

As such, she needs literature – not standardized tests. She needs mysteries to solve – not Common Core. She needs equitable resources – not charter schools. She needs teachers with advanced degrees and dedication to their jobs – not Teach for America temps.

Don’t you dare try to justify all that with some narrow economic view of monetary value. Some things have no price. My daughter is one of them.

NOTE: This article also was featured on Diane Ravitch’s blog, I did an interview about it on the Rick Smith Show, and was quoted in an article about the issue in the Washington Post.

45 thoughts on “My Daughter is Not a Widget”