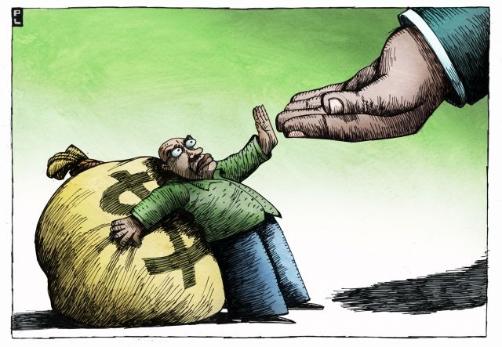 Ben Franklin famously said that nothing is certain in this world except death and taxes.

But in our modern age, that might have to be amended to read, “death and tax cuts.”

These days, lawmakers on both sides of the aisle can’t figure out how to govern without continually cutting taxes – and invariably the beneficiaries of such largess are the rich.

No one likes paying taxes.

You do a job, earn money and have to give a portion of it to the government.

But no one likes going to the dentist, either. Yet it’s something most adults do because we understand its necessity. We know that ignoring basic dental hygiene and avoiding regular dental check-ups will most likely result in halitosis, mouth pain and the eventual decay of our teeth.

There are similar societal problems with tax avoidance, but we’ve been tricked into willful ignorance.

The rich have paid for an army of economists, libertarians and other would-be thinkers to come up with justifications for avoiding taxation as much as possible.

It’s completely disingenuous. This is prostitution as philosophy. It’s whoring out one’s mental faculties to come up with a smoke screen behind which the wealthy can get away without paying their fair share.

The idea basically comes down to this: taxation is theft.

It imagines a mythical world without government and then tells a story about how that government got its power. But few of us have ever lived in a world without government. Neither did our parents or grandparents back through the mists of prehistory. In fact, it is hard to conceive of a time when people existed with no social structure at all from which individuals could then cede rights to a collective group.

And once government exists, each individual citizen owes it a debt. We owe it for all the public institutions from which we benefit. If we went to public school, for instance, we owe it for our education. Even if we were educated privately, we owe it for being able to live in a society where most people are educated since the great majority of those people received that education from public school.

It only takes a moment of reflection to see the complex web of benefits every person receives from society that come from some public services. Think of the inventions funded at least in part by government investment. Think of the safety we enjoy due to law enforcement and the military. Think of the roads and infrastructure that allow us to live at a high standard.

These are all provided by government, and no matter how rich or poor you are, you have benefited tremendously from being a part of it.

As such, you owe that society a certain portion of your income to help support this system.

It’s not exactly complicated. But certain economists make it complicated in a cynical shell game while their masters getaway without paying their debts.

And when they do, who has to make up the difference? You do!

No one gets rich because they’re inherently better than others.

A person worth $500 million is not 500 million times better than a person worth $1. They are both people and equally as valuable. Nor does income equate to how hard someone works. Many billionaires spend their days lounging around the pool drinking piña coladas. Many poor people spend their days scrubbing floors and toilets. The biggest difference between the two is luck.

The wealthy most often are rich merely because they won the lottery of birth or their business ventures succeeded due to pure chance. And even in the rare instances when people made a lot of money because of their intelligence or savvy, that doesn’t justify them being so unequally rewarded by our society compared to those of us without such talents.

If you judge a person solely on his/her bank account, you misjudge the majority of the population.

Some policymakers will acknowledge these points but still insist on tax cuts based on misconceptions and/or lies about how economies work.

They’ll say the United States already has some of the highest taxes in the world. We need to cut taxes to be competitive.

However, this is not true.

In 2014, total US tax revenue equaled 26 percent of gross domestic product (GDP) – well below the 34 percent average for developed countries, according to the Organization for Economic Co-operation and Development (OECD). 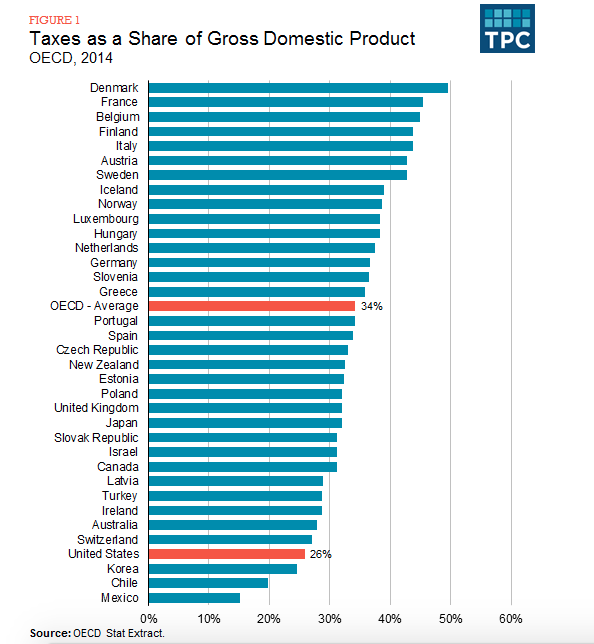 Some will argue that tax cuts are necessary to boost the economy. However, we have countless counterexamples to this popular fabrication. For instance, when President George W. Bush cut taxes from 2001 – 2007, the average annual growth rate was far below the average growth rate for any other period after World War II. In fact, only corporate profits experienced rapid growth. Over all, this expansion was among the weakest since World War II.

In short, the US is doing a terrible job providing every citizen with the benefits of our society. We are disproportionately rewarding the rich while forcing the rest of us to pay for the services from which we all gain. Moreover, other countries provide even more bang for that buck.

Now this doesn’t mean that the government should tax us all into the ground.

Nor does it mean that the government should spend our tax dollars willy-nilly.

But constantly cutting rich people’s taxes is immoral. It is unfair to the majority of people making up the difference and struggling to survive when government services lag behind need. 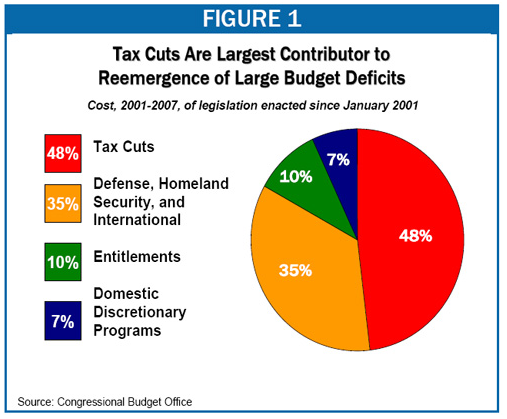 Our public schools are suffering under strategic disinvestment. Especially in poor neighborhoods that often disproportionately serve people of color, public schools cannot keep up with children’s needs. They aren’t providing an equitable level of service with those schools in richer, whiter neighborhoods.

Our policymakers try to solve the problem with charter schools, vouchers, standardized tests and Common Core. And the results have only been a worsening situation.

The real solution is simple – increased funding through fair increases in taxes on the wealthy.

Tax cuts are popular, but every time we let the rich get away with paying less, we have to either take more from the poor or take the knife to public services.

This affects the poor immediately in the form of reduced services, but it affects the rich, too. They have to live in a world where the majority has less – this means increased crime, increased drug abuse, increased ignorance, etc.

Otherwise, when we fall for these economic fallacies, we’re only stealing from ourselves.