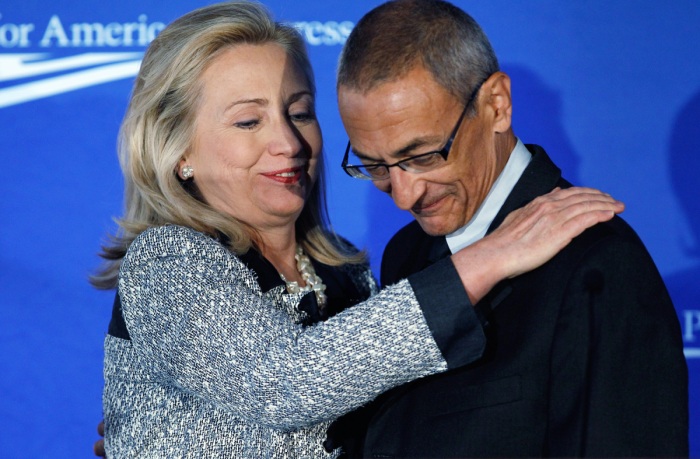 That’s right – the 2016 Democratic Presidential candidate who has been endorsed by the leaders of the national teachers unions has a corporate education reformer running her campaign.

Here are a few choice quotes from a speech Podesta gave in 2012 to the Foundation for Excellence in Education, a corporate education reform think tank established by Jeb Bush.

On Competition in Education:

“I think this emphasis that President Obama and Secretary Duncan have placed on competition – not just Race to the Top but competition throughout the system of education – is quite a good one, and I think the federal resources can be used to both support the development of new models and can force state experimentation in a way that’s quite healthy.”

“In my view, [education] requires an accountability system that ensures students achieve at the highest levels… It requires a teacher and principal workforce that are rigorously trained, highly skilled and comprehensively evaluated.”

“I would argue that while there are clearly still strong rejectionist voices in unions, national union leadership has come a fair distance in recognizing that teacher effectiveness matters, and that evaluation systems need to include student outcomes… The majority of teachers have less than 10 years experience, and younger teachers know what counts. They’re more reform minded… So the question I think for reformers is how do you keep the pressure on unions to change, how do you keep the pressure on to put kids first without demonizing teachers in the process?”

On School Vouchers and charter schools:

“I think vouchers are an unneeded distraction. We should concentrate on PUBLIC school choice.”

On the Bipartisanship of Corporate Education Reform:

“In my opinion, the Obama administration has made its key priorities clear. The Republicans are pretty much in the same place…”

On the new frontier for Corporate Education Reform:

“Early childhood education is ripe for investment and reform.”

It’s all there on video. I strongly recommend you put aside 42 minutes and watch Podesta cozy up to Bush and Chester E. Finn, President of the ultra-reformy Thomas B. Fordham Institute.

Podesta is probably the single most effective person at destroying public education of which you’ve never heard.

You know Arne Duncan – the worst U. S. Secretary of Education of modern times. But did you know that Arne wasn’t President Barack Obama’s first choice?

Obama almost picked Linda Darling-Hammond – his education advisor during his 2007 campaign. Hammond is a former teacher turned Stanford education professor. She is also a vocal critic of Teach for America.

However, Podesta oversaw the transition committee that helped Obama make cabinet choices. Ultimately, the responsibility rests with the President, but it was Podesta who suggested and lobbied for Duncan, the know-nothing Chicago Schools CEO for U.S. Education Secretary. In fact, Duncan’s selection is an achievement of which Podesta is given gleeful responsibility by the privatization and standardization crowd.

And now guess whose ear he is whispering into?

Podesta has a long history with the Clintons. He was Bill’s Chief of Staff for three years during which time the President pushed hard for voluntary national standards – a school policy that has become known by another name – Common Core State Standards.

Podesta also founded the reform think tank Center for American Progress, a bastion for neoliberal thought. The organization routinely hires the crème de la crème of corporate education reformers who then push for test and punish policies in the media and on Capital Hill.

Podesta has already helped push Hillary closer to the dark side.

Remember when she shocked the neoliberal establishment by suggesting that some charter schools game the system by refusing to accept the most challenging students? (Which, by the way, is 100% factual.)

This really turned off some super-wealthy donors. According to the Wall Street Journal, after hearing the comment, one of Clinton’s longtime supporters, Eli Broad, turned off the money faucet.

She wrote an op-ed calming charter fans because Hillary does, in fact, support charter schools – if they’re equitable and accountable.

Unfortunately, O’Leary has a strong corporate education reform streak, herself.

While an aide to Clinton in the Senate in 2001, O’Leary pushed Hillary to support No Child Left Behind (NCLB).

This was the bill that changed the federal role in education from ensuring equity to enacting an endless series of high stakes tests and expanded school privatization more than ever before. By it’s own measures of success, it was a terrible failure.

But O’Leary sees it differently.

“It was a really important moment,” O’Leary says. “When you look back at what happened, this was serious, bipartisan, constructive work. We were committed to high standards and helping states get there.”

O’Leary has somewhat stepped back her support of this bill. However, she blames the problems on implementation and not on the basic idea of high stakes testing.

She takes the same tack with Common Core. Implementation is the problem, not the policy.

And THIS is the woman advising Clinton on education!

By the way, she served with Podesta on the same Obama-Biden transition team that helped create our current disastrous U.S. Department of Education, though her focus was early childhood.

If Hillary Clinton really wants to forge a new path for U. S. schools, it’s surprising she’s surrounding herself with the same people responsible for the status quo.

Funded by wealthy privatizers, advised by standardization true believers, it is difficult to accept a second Clinton Administration would be anything more than a seamless continuation of the Testocracy.

Special thanks to Jake Jacobs who brought much of this to my attention.