The ocean is a gorgeous cerulean blue. Palm trees wave gently in the salty breeze. And in the distance you can hear percussion, horns and singing.

The protest has begun.

Residents of this United States territory have been fighting freshman Governor Alejandro García Padilla’s efforts to close public schools, privatize those left and shackle teachers to the same corporate education reform schemes that are crippling schools on the mainland.

This Tuesday island educators are asking parents not to send their children to school. Teachers plan to conduct a one-day strike to protest legislation that could be passed the same day to further cripple the Commonwealth’s public education system.

“On November 17th we’ll be giving our lesson’s outside our classrooms,” says Mercedes Martinez, president of the Federación de Maestros de Puerto Rico, the teachers union.

“We’ll be in front of our schools early in the morning and at 10:00 a.m. will march from Congress to the Governor’s Mansion in San Juan. This is one of many activities that we’ll perform in defense of public education. We will not accept these precarious impositions and will fight back.”

The protest is in response to Project 1456 which would close more than 380 public schools. The government has already closed 150 schools in the past 5 years.

This would force many students into even more overcrowded classrooms. Thousands of children would have to be relocated to schools far from their homes.

But that’s not all.

The proposed legislation would also privatize 15% of those schools left standing. Unlike the mainland, Puerto Rico has no charter schools. Teachers went on a 10-day strike in 2008 which only ended after the island Secretary of Education Rafael Aragunde signed an agreement promising not to open any charters.

If privatized schools opened on the island, parents might have to pay an additional fee for services they now enjoy for free. Amenities like lunches and even tuition may have to be subsidized by parents out of pocket.

Moreover, it would collapse the teachers retirement system, Martinez says. Charter schools would not deduct employees payments to the pension system so it might not be able to remain solvent.

Project 1456 would harm teachers in another way, too. It would enact a punitive evaluation system where 20% of educators value would be based on students standardized test scores. Any teacher with a 79% or less would have two years to improve or be fired.

“Teachers will have no rights,” Martinez says.

The proposed legislation has already been approved by the Commonwealth Senate. It’s main author Sen. Eduardo Bhatia is pushing for the House to fast track it for approval.

Protesters were there on Wednesday. They stood up in the government chamber and walked out en mass when it was brought up for discussion. Eighteen of them wore white T-shirts spelling out the message “Our Schools Are Not For Sale.”

Inside the House, presidents of private universities testified in favor of the measure.

“Obviously they want to become administrators of charter schools on our island,” Martinez says.

Outside the building, protesters held their own emblematic hearing on the matter. Community members, teachers and parents testified in the open air about how this legislation would hurt children. They ended with a symbolic vote against it.

Puerto Ricans are not alone in this fight.

Jitu Brown, a community organizer from Chicago and Director of Journey for Justice Alliance traveled there to stand in solidarity with those fighting for their schools. Brown participated in a 34-day hunger strike in his hometown a month ago to protest Mayor Rahm Emanuel’s plan to close the last open enrollment school in his neighborhood.

“This beautiful, breathtaking place is marred by ugly U.S colonialism and privatization of public services on steroids!” says Brown of Puerto Rico.

“I was blessed to spend time with powerful people fighting for a better world. Big ups to your warrior spirit, discipline and hospitality! Where we struggle, we can win! If we don’t struggle, we are guaranteed to lose.”

The plight of Puerto Rican communities also inspired support from the Badass Teachers Association, a group of more than 56,000 educators, parents, students and activists.

“The Badass Teachers Association stands in strong solidarity with our brothers and sisters in Puerto Rico who are fighting for the very foundation of their democracy – the survival of their public school system which is under assault by the 1% who seek to close it up and deny Puerto Rican children a right to an education,” says Executive Director Marla Kilfoyle.

Protesters are getting the word out. They’ve already handed out thousands of fliers. Today they plan to drive in a large caravan across the island.

“We’ve got a bunch of cars with sound equipment,” Martinez says.

“We will go to all the communities near our schools in different regions asking parents to support the strike on the 17th.” 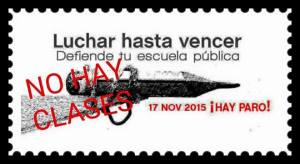 Much of the the island’s financial woes are imported from the mainland. Puerto Rico is besieged by vulture capitalists encouraging damaging rewrites to the tax code while buying and selling the territory’s debt.

Hundreds of American private equity moguls and entrepreneurs are using the Commonwealth as a tax haven.

As a result, tax revenues to fund public goods like education are drying up while the super rich rake in profits.

Officials warn the government may be out of money to pay its bills by as early as 2016. Over the next five years, it may have to close nearly 600 more schools – almost half of the remaining facilities!

“That’s why the Teacher’s Federation and other teacher unions allied together to fight back against the attack on our education system,” Martinez says.

If Project 1456 is passed by the House, the union is considering a general strike. 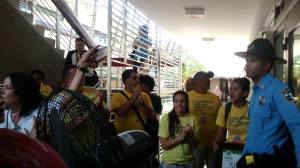 Of the 135 schools closed in just the last two years, Commonwealth Secretary of Education Rafael Román had originally proposed shuttering 200. The remaining 65 were only kept alive because communities occupied the buildings and refused to let the government step in.

“Senators decided to approve it without discussion because they did not want to listen to teachers chants and indignation,” says Martinez.

“Senator Bhatia has become the symbol for privatization under this administration. He has never been in a public School. He has no bond with it. He’s a demagogue.”