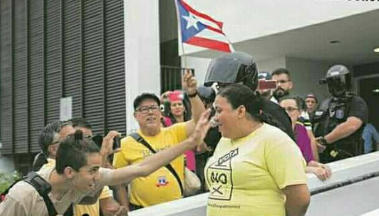 Help themselves, that is.

“This is a real opportunity to press the reset button,” said Puerto Rican Secretary of Education Julia Keleher.

“…this [is a] transformational opportunity for us to start to think fundamentally differently about what it is to be in school, and how one goes about getting an education.”

A dozen years ago in Louisiana, that meant stealing almost the entire New Orleans public school system in the aftermath of Katrina. About 90 percent of the city’s 126 schools were given to the Louisiana Recovery School District, which turned them all into charter schools.

In effect, Louisiana state officials elected by the white majority stole control from local school boards elected by the city’s black majority. More than 7,000 teachers most of whom were people of color and had been displaced by the hurricane found themselves replaced by mostly white teachers brought in from other parts of the country.

Now, more than 10 years later, the New Orleans experiment has been shown to be a failure. Scores on standardized tests have improved (kinda), but the curriculum has narrowed, teacher turnover has doubled, disadvantaged and special education students have even fewer resources while schools fight over high achieving children, students spend hours being bused to schools far from their homes, communities have been erased, and parents have less control over how their own tax dollars are spent.

That is what Keleher and others want to repeat in Puerto Rico – wrest control away from the public and give it to big business all wrapped up in a bow. 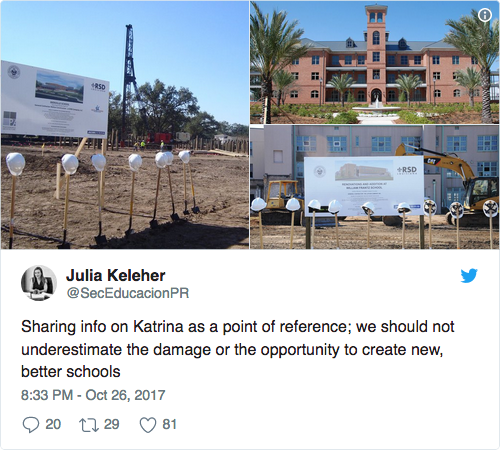 Public schools come with expensive perks like local control, transparent budgets and regulations to ensure all the money is being spent on students. It’s much cheaper to run these districts with unelected bureaucrats, closed-door budgets and the ability to grab as much of the cash as possible and stuff it into their own pockets.

It ’s not like anyone’s going to complain. These schools aren’t for rich white kids. They’re for poor brown ones.

The founder and CEO of school privatization lobbying group, the Center For Education Reform, said that charterization is the best thing that could happen to Puerto Rican schools.

After dealing with the immediate effects of the hurricane, reformers “should be thinking about how to recreate the public education system in Puerto Rico.” And she should know. Allen was also involved in the New Orleans fiasco turning that system over to big business.

She added that charter school operators across the nation, including cyber charter school managers (whose schools often have even more wretched academic results), should be thinking about how to get involved in Puerto Rico post-Maria.

Even though many Puerto Rican schools are only operational because of the work of teachers who have cleaned them up and have opened them despite being told not to by Keleher’s administration, the Education Secretary has pledged to lay off massive amounts of teachers and permanently close more schools – even schools that are structurally sound.

“Consolidating schools makes sense,” Keleher said in October. “They can go out and protest in the streets, but that doesn’t change the fact that we can’t go back to life being the same as it was before the hurricane.”

Just this week twenty-one teachers in the capitol of San Juan were arrested during a rally at the Education Department headquarters. They were demanding all structurally sound schools be opened immediately.

“Our schools have served students well and although we recognize that it can be expensive to repair some schools, what we are asking is that schools that are ready be opened,” said social worker Alba Toro just before the arrests.

Administration officials are claiming the teachers were taken into custody because they physically attacked the civil servants, but witnesses say the protest was entirely peaceful.

According to Education Safety Commissioner César González, the protesters assaulted at least three security employees and a public relations employee while inside the building.
However, protestors dispute this version of events. Eulalia Centeno, who was part of the group that went inside the building, but left before the arrests began, said that no violent acts were committed and that the protesters only demanded to see the secretary to request the opening of public schools.

Seven weeks after the hurricane, less than half of the island’s nearly 1,200 public schools are open in any capacity. Though many schools endured severe storm and flood damage, others were repaired and cleaned to shelter hurricane victims and are ready to take in students.

“Keleher is using the crisis as an opportunity to close hundreds of public schools, lay off senior teachers and privatize public education,” says Mercedes Martinez, President of the Federacion de Maestros of Puerto Rico, an island teachers union. 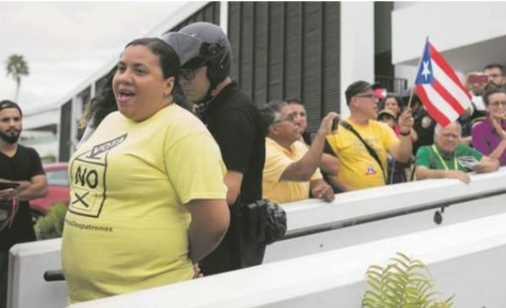 Martinez was one of the teachers arrested during the protest.

When she was taken out of the building in handcuffs, her son was photographed leaning over a railing and patting his mother on the shoulder.

This is what real heroes do.

They refuse to back down despite the forces of prejudice and commerce stacked against them.