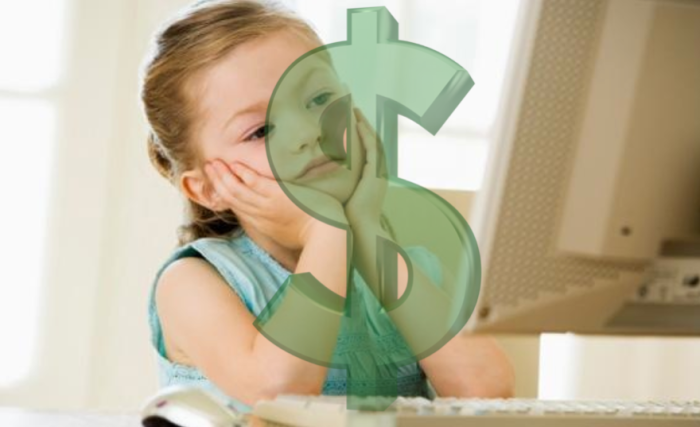 If you’re a parent, you’d literally be better off having your child skip school altogether than sending her to a cyber charter.

But if you’re an investor, online charters are like a free money machine. Just press the button and print however much cash you want!

Nowhere else is the goal of corporate education reform as starkly clear as in the cyber charter industry. Nowhere else can such terrible academic results reap such tremendous financial gain.

Cyber charter schools are elementary and/or secondary institutions of learning where all or most lessons are given online via computer. Like brick and mortar charter schools, they are funded by taxes but are free from much of the regulations and oversight of which traditional public schools are subject. By every discernible report, the education provided by these online charters is truly execrable.

There are only 180 days in an average school year. So cyber charters provide less math instruction than not going to school at all.

Ever watched an episode of Sesame Street? Then you got a better math education than an entire year at an online charter!

Dora the Explorer, Barney the purple dinosaur, Mr. Rodgers Neighborhood, the Teletubbies – all are more mathematically rigorous than cyber charters!

But what about reading?

When it comes to that essential skill, online charters come out much better. They only provide 72 days less instruction than traditional public schools.

So at a traditional public school you’d get a better education in reading if you simply took off at the end of February. You’d get more instruction if you only went slightly more than every other day!

The same study found that 88 percent of cyber charter schools have weaker academic growth than similar brick and mortar schools.

They have an “overwhelming negative impact” on students, according to researchers. Not only do they have fewer learning days in math and reading, they have a higher student-teacher ratio and much more limited opportunities for live-contact with teachers than brick and mortar schools.

For instance, student-to-teacher ratios average about 30:1 in online charters, compared to 20:1 for brick and mortar charters and 17:1 for traditional public schools.

And THIS is somehow a viable alternative to traditional public schools!?

Well caveat emptor, suckers! Thank goodness for the ignorance of the public!

But at least it’s easy to set up these failure factories.

Here’s all you have to do:

Then sit back and watch the money roll in.

From an education standpoint, the model is clearly unsound.

Here’s how a cyber charter teacher describes the reading curriculum at his school:

“Most cyber schools get their curriculum from K12, a company started by William Bennett, a former federal Secretary of Education. My school gets the majority of its high school material from a mail order company called Aventa.

When Aventa creates a course it is fairly bare bones. They choose a textbook from one of the major textbook companies, and cut it up into lessons. The lesson will contain a few paragraphs introducing the topic, they will have the students read a section of a chapter, they will ask the student to do a few problems from the book, and lastly, there will be some form of graded assessment, taken from textbook review problems. That is all.”

This is like giving out nothing but worksheets and expecting high academic performance. Here. Read the book, answer the questions at the back, and call it a day.

Even though it’s an online school, you do need a few flesh and blood “teachers” occasionally. Their job is to contact students every now and then, but – get this – in most states they don’t even have to be certified. In my home state of Pennsylvania, only 75 percent of cyber charter teachers need to be certified and even those are not subject to the same educator effectiveness accountability regulations as traditional public school teachers.

So you could have your cousin Vinnie calling students and asking how they’re doin’. It really doesn’t matter. Most times the kids won’t answer the phone anyway.

That’s about all it takes. And boy does it pay!

Cyber charter operators pull in the same amount or more of tax revenues as traditional public schools – and here’s the best part – what they don’t spend on students is all bank for them and their shareholders!

Everything is set up to benefit online charter investors to the detriment of students and families. Take the very way online charters are paid.

They get money for each student enrolled. That money comes from the school district where the student lives.

However, in many states like Pennsylvania, each district spends a different amount of money per student. These expenditures reflect varying costs and available funding from the local tax base.

So cyber charters get whatever that local per-pupil expenditure is. It doesn’t matter if a district spends $8,000 on each student or $20,000. Whatever the amount, that goes to the cyber charter.

However, the cost of educating kids is drastically reduced online. Their programs are bare bones compared with what you get at a traditional public school. Most online charters don’t have tutors or teacher aides. They don’t offer band, chorus or extra-curricular activities. You don’t have to pay for any building costs, grounds, upkeep, large staff, etc. But funding formulas in most states ignore this completely. Cyber charters get to keep the difference – whatever it is. In fact, they have an incentive to keep as much as possible because they can do almost whatever they want with it. That includes putting it into operators’ pockets!

They just call it profit.

Even many online charters that claim to be non-profit do this.

For instance, take Pennsylvania’s Insight PA Cyber Charter School. On paper, it’s run by a nonprofit board of directors. However, the board gave over all day-to-day operations to a for-profit company, K12 Inc. On paper it’s one thing. In practice, it’s something else entirely.

And in some states when it comes to special education funding, it gets worse. In Pennsylvania, our funding formula is so out of whack that charters schools of all stripes including cyber charters often end up with more funding for students with special needs than traditional public schools. However, because of this loophole in the Commonwealth, Pennsylvania online charters have been increasing the number of special education students they enroll and even working to add that label to as many of their students as possible. The state Department of Education has been so underfunded it does not have the resources to oversee these changes.

Issues like these permit a bait-and-switch that sends an awful lot of tax dollars earmarked to help children into the maw of private industry.

Sure there’s a lot of turnover. Few students stay enrolled in online charters more than a year or two before realizing they’ve been had. But they are easily replaced.

With all these issues, why do online charters keep getting approved? Ask the your local state Department of Education.

Unlike brick and mortar charters, which require approval at the district level, in most states cyber charters are approved by the Department of Education. Admittedly the online charter boom has slowed somewhat after news of fraud and abuse has become an almost a weekly occurrence in the national media.

For instance, PA Cyber Charter founder Nicholas Trombetta allegedly stole at least $8 million in public dollars only a few years ago. He bought an airplane, a $900,000 condo, houses for his girlfriend and mother, and nearly $1 million in groceries and personal expenses, according to the grand jury. Trombetta allegedly set up numerous for-profit and nonprofit businesses to provide goods and services to the cyber charter. Federal investigators filed 11 fraud and tax conspiracy charges against him and indicted others in the case.

While Trombetta awaits trial, the school continues to do business awaiting a potential state audit.

Another cyber charter founder, June Brown, was also indicted for theft of $6.5 million. Brown and her executives were indicted on 62 counts of wire fraud, obstruction of justice and witness tampering. She was well known for student test scores and had a reputation for claiming large salaries and filing suits against parents who questioned her, the Philadelphia Inquirer reports.

Brown is also awaiting trial. She ran the Agora Cyber Charter School, which was part of the K12 Inc. empire of virtual charters.

With this kind of fraud and a record of academic failure, perhaps the most amazing thing about cyber charters is that taxpayers allow them to exist at all.

You hear educators say it’s all about the children. But not at online charters.

There it’s all about the Benjamins. Heck! The McKinleys! The Clevelands! The Madisons! The Chases! The Wilsons!