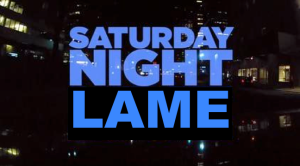 But make them fair. No sucker punches.

And – goddammit – make them funny!

However, all we got on Saturday Night Live this week during the “Teacher Snow Day” segment were unconvincing lame low blows.

In the rap video parody, we see educators boasting of all the money they’re making for doing nothing, telling their students to “go to Hell,” having sex on school property, using meth they made in the science lab, and bragging that there’s nothing you can do about it because they have tenure so can’t be fired – all while students have the day off because of snow.

Are you freakin’ kidding me?

As a public school teacher of more than a decade, I wasn’t laughing. Nor was I alone. Ratings plummeted yet again from an already dismal viewership.

I hesitated writing this article at all because so few people saw the segment the first time, and I certainly don’t want to encourage anyone to go back and view this groan-fest.

But address it I must, because it’s part of a larger problem: the idea that teachers are fair game as a target for just about any dishonest criticism you can imagine.

And that’s the problem – dishonesty.

Jokes work best when they attack the powerful, not the powerless.

That’s the whole point of satire – to allow an attack on the dominant from below. When a mighty person attacks someone less powerful, that’s not satire and it’s not funny. It’s bullying.

We all remember teachers from school. When we were students, they were authority figures and – as such – fair targets of criticism.

But in a larger social context, teachers are one of the most vulnerable and disenfranchised groups in our society.

Educators are under constant onslaught from all sides.

Every problem of our public school system is heaped on top of them. No matter what’s wrong, it’s always their fault. And we’re quick to prove it by stacking the cards against them.

Just look at how we evaluate them. Our federal and state governments mandate we base teachers’ effectiveness substantially on their students’ standardized test scores. Statisticians call this approach “junk science” because it uses a test created to evaluate students as an assessment for something it was never meant to assess – their instructors. But that doesn’t stop the continued use of these value-added measures to “prove” how crappy teachers are at their jobs. And when educators gather together in a union to demand real proof of wrongdoing before they can be fired, they’re accused of insisting we give them a job for life.

Teachers don’t even have control over their own curriculum anymore. In many schools, educators can’t choose which books to use, which skills to teach or how to assess student learning. Often they’re even denied the choice of their own words since they’re forced to read from scripted lessons provided by multinational for-profit testing corporations.

Education policy doesn’t come from teachers. Do you think educators came up with Common Core? Of course not! That was a billionaire philanthropist’s pet project created with the help of think tanks and policy wonks. But teachers are expected to follow it regardless of their years of classroom experience that tell them it’s nonsense – at best – and developmentally inappropriate – at worst!

And if a teacher wants to speak up, the venues open to him are few and far between. Turn on any media program about education and you’ll see half a dozen talking heads offering their opinions but not one of them will be a teacher! Heck! Congress just held hearings on the federal law that governs K-12 schools (ESEA) and only let a handful of teachers testify.

Because if they don’t blame teachers, they’d have to face the facts of income inequality and child poverty.

More than half of all public school students are impoverished. Instead of providing extra resources to help those students, budgets have been slashed. Less tutoring. Less arts and music. Less extra curricular activities. Less social services. But instead larger class sizes! And we expect teachers to magically make our uncaring budgetary priorities work!

Yet, the “not ready for prime time” crew at SNL thought it was funny to target one of the only groups to stand up for these children.

You’d never see them make jokes at the expense of our troops, but teachers are soldiers on the front line of the war on poverty.

When troubled teens denied the proper mental health services use our lax gun laws to take a semi-automatic with them in their book bags to school, it’s these same teachers who literally give their lives to save our children!

And these unsung heroes, these public punching bags, these scapegoats for all of society’s ills were your choice of target for feeble clowning?

I expect that from dark money fueled privatizers and corporate backed union busters. I don’t expect it from someone who’s supposed to help me get through another week with a few good laughs.

Snow day? You should have called it snow job because the only ones laughing were the Koch Brothers!

Sure, if you want to joke that teachers are too stuffy, fine! We deserve that criticism. As a whole, we are unhip, mostly white, sometimes pedantic and give too much homework.

But don’t you dare criticize us for being uncaring or lazy or criminal.

While you’re making jokes, our nations children are forced to go without – unless a teacher somehow manages to help.

That’s no joke, and the punchline may well be the future of this nation.

While I’m staying hours late at school almost every day…

While I’m counseling a student with severe emotional problems…

While I’m doing my job, why don’t you do yours, SNL?

This article was also published in the LA Progressive.