Skip to content
HomeHow to Oppose White Supremacists Without Becoming a Monster, Yourself 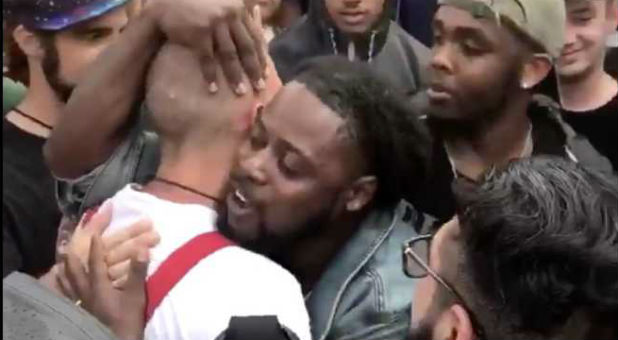 There is a danger in opposing white supremacists.

In confronting such an odious set of beliefs, you can justify suspending your own strongest held moral convictions as a necessary end to defeating their prejudices.

When hearing an ignorant troll like Richard Spencer arrogantly spouting warmed over Nazi propaganda, it is quite natural to wish to issue a rebuttal in the form of your fist.

You can follow the logic all the way from your heart to your knuckles.

This fool is so enamored with violence, let him suffer the consequences of it.

But that is conceding the point.

That is giving the white supremacist his due. It’s entering his world and playing by his rules.

Oh, I’m sure it’s satisfying, but it’s the wrong way to respond.

However, on the other hand one can’t simply smile and nod during Spencer’s tirade and then expect to reciprocate with an academic treatise.

No cogent, logical, professorial come back is going to counter the purely emotional arguments made by white supremacists.

They are stoking fear and hatred. Logic is useless here.

We have to walk a razor’s edge between two poles.

On the one hand, we can’t tolerate intolerance.

As Vienna-born philosopher Karl Popper put it in The Open Society and Its Enemies, unlimited tolerance leads to the destruction of tolerance.

If we tolerate the intolerant, if we give them equal time to offer their point of view and don’t aggressively counter their views, they will inevitably resort to violence and wipe our side out.

This doesn’t mean immediately punching them in the face or violently attacking them. For Popper, we should let rationality run its course, let them have their say and usually their ideas will be rejected and ignored.

However, if this doesn’t happen and these ideas start to take root as they did in Nazi Germany (or perhaps even today in Trump’s America), then Popper says we must stop them by “fists or pistols.”

“We should therefore claim, in the name of tolerance, the right not to tolerate the intolerant. We should claim that any movement preaching intolerance places itself outside the law, and we should consider incitement to intolerance and persecution as criminal, in the same way as we should consider incitement to murder, or to kidnapping, or to the revival of the slave trade, as criminal.”

Popper believed in the free expression of ideas, but when one of those ideas leads to violence, it is no longer to be tolerated. Then it is outside the law and must be destroyed. 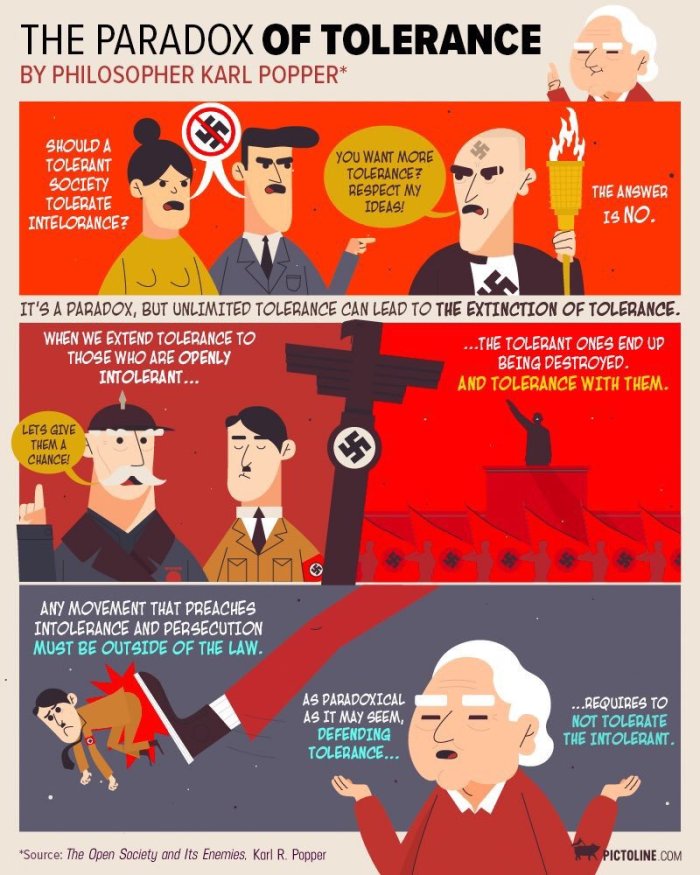 What then do we do with our commitment to nonviolence?

Do we reluctantly agree to push this constraint to the side if push comes to shove?

No. This is the other pole we must navigate between.

On the second to last day of his life, April 3, 1968, Dr. Martin Luther King, Jr., gave a speech stating his unequivocal commitment to the principal of nonviolence:

“It is no longer a choice between violence and nonviolence in this world; it’s nonviolence or nonexistence. That is where we are today.”

The next day he was shot to death. These are among the last words he spoke in public.

That King was to be martyred in the cause of justice would not have surprised him.

He had already received several death threats and attempts on his life.

He knew that his continued efforts to fight for human dignity would probably result in the premature ending of his life someday. He knew all that yet he still prescribed nonviolence.

There was simply no other way for him to exist.

Mahatma Gandhi, who influenced Dr. King and our American fight for civil rights with his own nonviolent revolution in India, went even further.

At the start of WWII, he wrote that the British should lay down their arms and let the Nazis invade the United Kingdom without offering any violent resistance. They should even let themselves be slaughtered if it came to it. He made similar remarks to Jews facing the Holocaust.

But can you imagine its effect?

No one followed Gandhi’s advice. We fought the Germans in WWII and won. We crushed their pathetic thousand year Reich and threw their prejudiced ideals on the trash heap of history.

And yet here we are today. In Charlottesville. In Portland. In Washington, DC.

The scared and ignorant have rooted through the trash and recycled those same odious ideals.

The war ended, but the battle goes on.

Would that have happened had we met violence with nonviolence?

I don’t know the answer. No one does.

But it respects an important point – we can’t ultimately fight our way to peace. Not without killing everyone else. And then why would the solitary survivor wish to live?

There is an inherent flaw in humanity that continually incites us to kill each other.

We can never have true peace unless we find a way to stamp out that flaw.

Nonviolence is the closest we’ve ever come to finding a solution.

So there you have it, the Scylla and Charybdis of our current dilemma.

We must try to navigate between them.

We must not tolerate the intolerance of the white supremacists. But we must also not allow our opposition of them to change us into that which we hate.

I know it sounds impossible. And I certainly don’t have all the answers about how we do it.

To start with, when white supremacists advocate violence of any kind, we must seek legal action. We must use every tool of the law, the courts, and law enforcement to counter them.

This requires political power. We must organize and keep them politically marginalized and weak.

We must take every opportunity to speak out against white supremacy. We must continue to make their ideal socially and culturally repugnant. At the same time, we must also reach out to them in the spirit of healing and love. We can’t give up on them, because they, too, are our brothers and sisters.

Yet if they resort to violence, we can feel justified in protecting ourselves and those they wish to victimize.

But the keyword here is “protect.”

We should go no further. We should not attack.

I know that is a hard line to walk.

Maybe it’s not even possible. Still, we must try.

It might feel satisfying to punch a Nazi. Heck! I’m sure it would. But we cannot allow ourselves to become like them.

Because the real enemy is not them.

It is their fear and ignorance.

And if we’re honest, we hold the same disease deep inside our own hearts.

We cannot defeat racism and prejudice unless we overcome our own flawed humanity.

3 thoughts on “How to Oppose White Supremacists Without Becoming a Monster, Yourself”