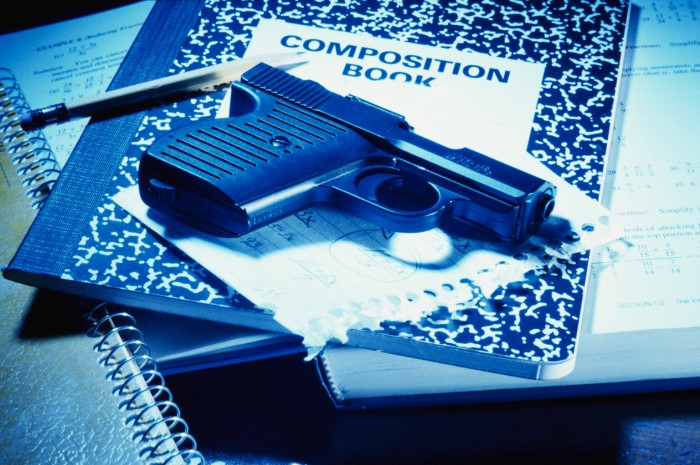 Next school year, I may be able to bring my gun to class.

The Pennsylvania state Senate voted 28-22 today to allow school employees like me to start packing heat.

But now I can be fully armed.

Bullets over books, I guess.

As a more than 15 year veteran of the public school system, I can’t wait to get back in the classroom wondering which of my fellow teachers, principals, custodians or rent-a-cop security guards is fully locked and loaded. I can’t wait until my elementary school daughter is finally protected by being in an adult’s daily line of fire.

This is going to make us much safer.

At my school, we fired a security guard for slamming a student’s head into the table. I’m sure having these folks armed will have no negative effects at all.

And the extra stress from added responsibilities being piled on my back will just make me more vigilant in case I need to take out my piece in class and chase away Black Bart with my Red Ryder, carbine action, two-hundred shot range model… uh… rifle.

Maybe I can get one with a compass in the stock and a thingie that really tells time, too!

Seriously, it’s hard to believe that grown adults actually voted on this ridiculous farce of a law. The only positive thing is that it still needs to be passed by the House and signed by the Governor.

Bad news: state Representatives just might be as stupid as their Senate colleagues. Good news: the Governor isn’t. There is less than a snowball’s chance in Hell that Gov. Tom Wolf is going to sign this piece of crap.

This is what happens when you have a Republican-controlled legislature and a Democratic Governor. The kids say they want nothing but candy for dinner and Dad says “No.”

Now, with a reality TV star con man in our highest national office, GOP-controlled state legislatures like mine all over the country have become emboldened to pass even worse excrement knowing full well that it has zero chance of ever becoming law. But at least they’ll prove to their gerrymandered Republican voting districts not to primary them with even further right leaning Tea Party mental defectives.

It’s a game of chicken with our most vulnerable residents held hostage in the middle.

You know, if lawmakers think that guns are such a great idea in schools, why don’t they make them legal at the state capital?

You can’t go in that building without passing through a metal detector. If you try to bring a gun in there, the best thing you can hope for is to be refused entry.

The same thing at Commonwealth courts, military bases, mental hospitals, prisons and even the security checkpoint at the airport.

And it’s pretty similar in most states. Certainly at federal institutions. You can’t take a firearm with you to visit your Congressperson – or on a tour of the White House.

Heck! Guns aren’t even welcome at Donald Trump’s political rallies, or most of his hotels, golf courses or other properties. Same at conventions held by the National Rifle Association and the Conservative Political Action Conference.

Gee. Why are so-called conservatives so darn concerned with making sure teachers are armed, but they don’t want to offer the same “protection” to themselves in government, at their businesses, rallies and places of leisure?

Why? Because it’s bullshit.

Most of them don’t really want guns in schools. They know it’s a terrible idea. They just want to look like they support it. Their propaganda networks spew out all this nonsense that they have to pretend to believe.

When they let protesters enter the capital building open carrying automatic weapons, THEN I won’t doubt their sincerity.

When they let Black Lives Matter activists strapping rifles across their shoulders into their rallies among the angry and confused hillbillies, THEN I’ll know how serious they are.

And when the upper crust private and parochial schools where they send their own children start arming their teachers, THEN I’ll believe them.

Until that day, I call bullshit on this whole ridiculous endeavor.