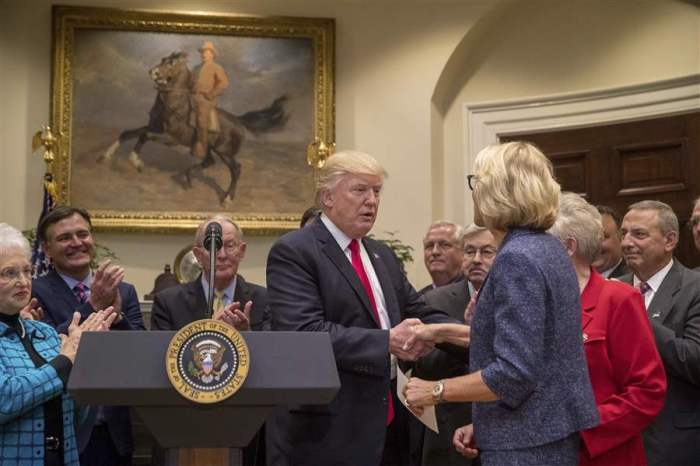 Donald Trump is talking out of both sides of his mouth.

This time he’s signing an executive order demanding the Department of Education study how the federal government oversteps its legal authority with regard to K-12 schools.

Yet he still proposes bribing states with $20 billion in federal funds to enact school vouchers.

Well which is it, Oh Orange One?

Are you for limiting the federal role in education or for coercing states to do your bidding?

Because you can’t be for both.

Either states and local districts determine the bulk of their school policies or not. You can’t barge into our state capitals promising billions of dollars in federal tax money if and only if we enact your chosen reforms.

That’s one of the primary reasons many conservatives (and even a sizable number of progressives) oppose Common Core. The Obama administration promised billions of dollars in Race to the Top grants if and only if states adopted these new, untried academic standards.

How is Trump’s voucher scheme any different?

In both cases, the proposed education reform has not been proven to work, and it’s not being requested by the education community or voters. In fact, when it comes to vouchers, voters have repeatedly turned them down in referendum after referendum.

So if Trump wants to investigate federal overreach, he should start with his own campaign speeches on vouchers.

So why is the former Realty TV star doing this?

Well, his first hundred days are almost up, and he has next to nothing to show for it. Other than uniting the American people against him, President Con Man hasn’t achieved much. One can imagine why he might want to hurry up and toss off yet another executive order so he could put something – anything – in the achievement column.
But there’s a more insidious reason why the founder of Trump University took out his signing pen.

His administration – especially his Department of Education – is particularly inimical to civil rights.

Just look at the brain trust he has running it.

Secretary Betsy DeVos isn’t sure the department should be in the business of protecting special education students. Nor is she willing to take a stand to protect transgender kids.

In college, she thought she, herself, was being persecuted because a tutoring group set up for minorities wouldn’t serve her as a white person – despite the fact that she could probably afford to pay for her own damn tutoring.

So this latest “study” into federal overreach is probably an attempt by the Trump administration to justify doing nothing to protect the civil rights of students across the country.

Under President Bad Hair Day, special education students can be denied services with impunity. It’s not the federal government’s job to step in. THAT would be overreach.

And if black and brown students don’t receive the same resources and opportunities as their white counterparts, there’s just nothing the Trump administration can do. They don’t want to step over the line.

It’s not that The Donald doesn’t sympathize with transgender students denied access to bathrooms that correspond with their gender. Ivanka even gave him a stern talking to. It’s just that his tiny little hands are tied. Thems the limits of federal authority, Son.

If you ask me, that’s truly the impetus behind this executive order.

He’s just setting up his next excuse for giving us, the American people, zero return on our tax dollars.

That way he can just shrug and offer more tax cuts to the rich.

Sadly, there is truth to the claim that the Department of Education has overstepped its authority. Both Presidents George W. Bush and Barack Obama frequently usurped states and communities local control. No one was crying out for high stakes testing, more test prep material, and unregulated charter expansion. But that’s what we got!

If you’re looking to Trump to balance the scales, look somewhere else!

He has given no indication that he will be any different. He’ll still push his own agenda on us, but he’ll pretend like we asked for it.