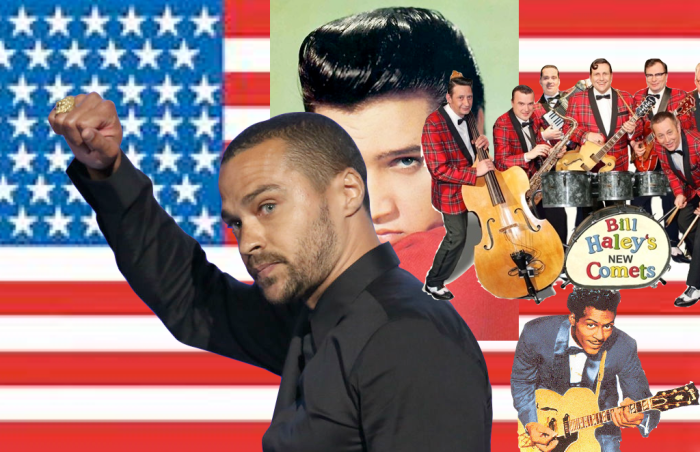 “We’ve been floating this country on credit for centuries, and we’re done watching and waiting while this invention called whiteness uses and abuses us, burying black people out of sight and out of mind while extracting our culture, our dollars, our entertainment like oil – black gold, ghettoizing and demeaning our creations then stealing them, gentrifying our genius and then trying us on like costumes before discarding our bodies like rinds of strange fruit.”

With these words, Jesse Williams absolutely floored the crowd at the BET Awards Sunday night.

His acceptance speech for the Humanitarian Award was jaw dropping.

Here was a black actor on “Grey’s Anatomy” just telling it like it is on national TV.

He wasn’t afraid a business dominated by white people would take offense (and some white people did). Or if he was, he wasn’t going to let it stop him.

The activist who recently produced a documentary “Stay Woke: the Black Lives Matter Movement” said, “The burden of the brutalized is not to comfort the bystander… If you have a critique for the resistance… then you better have an established record of critique of our oppression.”

No more tone policing. No white fragility. Just if you’re with us, stand up – otherwise, sit down and shut up.

It was beautiful. And it got me thinking.

There are so many obvious truths about our country’s relationship with race that hardly anyone ever gives voice to – especially a white person like me.

So I’m going to add my voice to Jesse’s. I’m just going to say it.

It’s past time we admit it, white people.

American culture would not exist without black culture.

I don’t mean to say that white people are incapable of culture or that if black people had never been kidnapped and brought to our shores as slaves that white people wouldn’t have been able to devise a unique national character.

But if that had happened, it would have been a very different character than what we have today.

It might be America, but it would not be our America. It would be some other thing. I will leave it to speculative fiction to attempt to determine what that might have been like.

However, we need not resort to fantasy to see all the incredible things black people have given us. They’re everywhere, in everything – though usually staring back at us through a white face, heard from a white voice and monetized by a white industry.

The hundreds of years of struggle from slavery through Jim Crow through the modern prison state have given black people plenty of fertile ground with which to build our national culture. Traditionally white people have served as both oppressors and appreciators of the fruits of that oppression.

The most obvious example is music.

But it couldn’t exist without black music – specifically blues and jazz.

Rock n’ roll was invented during the second great migration, when black people from the southern United States came into contact with large groups of whites in big cities such as New York, Chicago, Cleveland, Buffalo, etc. It was the first time many white people heard black music like blues, work songs, etc. It was also the first time many black people heard European instrumentation. The resulting cultural collision was extremely fruitful.

Rhythm and blues (sometimes called “race music”) evolved into distinct new styles – country, jazz, gospel, folk and rock. In many ways the different styles had less to do with actual differences in the music than in rebranding black music for a white audience. When a black musician became known for a particular kind of music, the fledgling music industry tried to monetize it by finding a white musician who could do something similar and thus reach a larger audience.

Black musician Chuck Berry was one of the first to play what we’d recognize as rock n’ roll. He took standard jump blues and played the two-note lead line on his guitar that until then was typically performed on piano. He put guitar at the center of the sound, amplified it, electrified it and rock was born.

However, the first certified rock hit “Rock Around the Clock,” was recorded in 1954 by an all white band, Bill Haley and His Comets. With this recording, the die was cast. The music was invented and developed mostly by black musicians, but it wasn’t a major success until it was recorded by white musicians.

The same thing can be seen with Elvis Presley, the so-called “King of Rock n’ Roll.” He wasn’t breaking any new ground. He was just the first white person who could sing like the black blues musicians who came before him. They toiled in obscurity. He cashed in.

This isn’t to say that no black musicians succeeded playing rock n’ roll. But it was predominantly white musicians who popularized the style that their black forebears had created.

To understand this, perhaps it is best to turn to the insight of Amiri Baraka (formerly known as LeRoi Jones). In his classic book “Blues People,” he dissects the complex American relationship of race and music through the 1960s.

Baraka writes that white and black America have different value structures. As such it is a very different thing for a black American and a white American to play the same music.

There is something jarring and revolutionary when white musicians play black music, Baraka writes. In doing so, the music becomes devoid of race. It is no longer black music. It is just music.

However, the musicians who created it are not likewise freed from the ghetto. They’re still black even if their music no longer is.

So what are black musicians left to do but create new music that they can call their own?

This may explain why so few black performers play rock music anymore. It was taken from them. They had to move on.

Even so, their fingerprints are all over everything that came after. The Beatles, Rolling Stones, Led Zeppelin, Metallica, all the way through the White Stripes and Black Keys. Ask any hardcore fan to name the best rock guitarist who ever lived, and the answer is bound to come back – Jimi Hendrix. Yet, Eddie Van Halen made an awful lot more money.

Perhaps the most incredible thing is that black musicians have continued to develop new and more creative music after every appropriation. Funk, Rap, Pop, Hip Hop, modern R&B. One can see all of it as a progression of gentrification and subsequent creation.

It makes me wonder: why do we love black culture so much but not black people?

As Williams said to end his speech this weekend, “…just because we’re magic doesn’t mean we’re not real.”

Black people have achieved amazing things in America. But white people rarely give them their due.

For instance, people generally think of rap as a black thing. But the largest audience for the genre is us, white folks.

There’s something jarring about white teenagers singing along with every n-word in the lyrics of a black rapper’s song as if these kids had the right. We don’t, people.

As Baraka might say, it’s a very different thing when we say it. But it’s more than just rebellion.

Too often white people turn to music that is characterized as black as a way to mock that culture. We demand black culture be commodified in a way that makes sense to our vision of what black people are. And when someone like Williams comes forward to call us out on it, we resent it.

We love our culture, but we’re ignorant of our history.

We enjoy living vicariously through a marketed vision of black struggle but we don’t do anything about the actual struggle before our eyes.

Our black brothers and sisters are crying out in pain. And we’re the cause.

No, we probably didn’t light any crosses afire on anyone’s lawn, but what about our attitudes? What do we say when race comes up? Do we indulge in gut reactions of colorblindness or do we actually listen to what black people have to say? Do we do anything but shrug?

This isn’t about white hate or white guilt. It’s about accepting our responsibilities.

We owe black people much of our very idea of what it is to be an American. Isn’t it time we started paying it back with love and action?