Skip to content
HomeDo Democrats Give a Crap About Public Schools? John King as Next US Secretary of Education 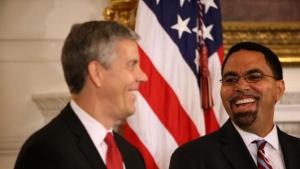 Same as the Old Boss.

Arne Duncan is out. John King is in.

We’ve put up with 7 years of Duncan’s buffoonery as U.S. Secretary of Education: A man with no practical knowledge of the field. A corporate functionary. A drone. A mouthpiece for all the worst ideas of the 1% to sabotage public schools and replace them with charters.

And who does Obama replace him with!? Former New York State Chancellor King!? A man who was almost run out of his state on a rail!? A man with – admittedly – more experience than Duncan but all of the worst kind.

King resigned his NY position in the throes of terrible publicity for his and NY Board of Regents’ foolish approval of an obviously fraudulent charter school run by an obviously fraudulent con man. He ignored and dismissed parents at education forums, refused to fix an education system that he, himself, destroyed and was met with the largest opt out movement in the country. Oh. And that education experience I spoke of – he spent three years teaching in a “no excuses” charter school with a high suspension rate.

And now King’s the top policymaker in the nation for public schools.

Lest we forget, this is a decision made by Democrats – the supposed saviors of education.

Progressives have been howling against Obama’s test-and-punish education policies since early in his first term. And now when this liberal lion has an opportunity to show what he’s learned, to demonstrate that he’s taking our concerns seriously, his response is a middle finger salute.

The Presidential Primaries are only a handful of months away. If the Democrats really wanted to court educators, the party would have put pressure on Obama to make a pick teachers might actually be able to stomach. After all, whoever the President picks will only have a year in office – not long enough to make any major changes one way or another. But at least the Democrats could make a show of listening to an important voting block.

Instead the Democrats have demonstrated their true colors. They don’t care about schools, teachers, parents or students. They figure we have no where else to turn. We’re a gimme. They don’t have to concede anything. We’ll vote for whoever the Democratic nominee is.

I am only one man. I belong to a lot of education groups, but I am speaking only for myself here when I say this: MY VOTE IS NOT A SURE THING.

I will not vote for just any Democrat over any Republican. No, I don’t see any of the GOP candidates as being good for education. But most of the Democrats are the same or almost the same.

If the Democrats don’t give me a candidate I can believe in, I will not vote Democrat. I will vote third party. Heck! I’ll write in “John Dewey” before I’ll vote for a faux progressive Democrat like Obama.

I know what some people will say. This is a wasted vote. We have to keep a seat at the table. We need someone who maybe someday might possibly do something just a little bit helpful.

And that’s exactly why we’re in the predicament we are now. We can’t keep voting for the lesser of two evils, because at the end of the day, we’re still voting for evil.

I am so sick of politicians who smile to my face and stab me in the back. If I’m going to vote, it will be for someone I believe in, and if a Republican bent on destroying public education wins, at least he’ll have the decency to be honest about it.

NOTE: This article also was published in the LA Progressive.

27 thoughts on “Do Democrats Give a Crap About Public Schools? John King as Next US Secretary of Education”