Q: When can’t you take a robber to court for stealing your stuff?

A: When the robber steals your ability to appeal.

Such is the tortured logic being used by the Commonwealth of Pennsylvania against one of its own public school districts.

Last week, a judge ruled that the state was entitled to take over York City Schools from taxpayers.

The district filed an appeal, which the state is trying to strike down.

None of that is surprising. But the justification the state Department of Education is using to overturn this appeal is something out of Alice in Wonderland.

Get this! When the state was granted control of York Schools, the district lost the ability to appeal unless that appeal was approved by the state.

So goes a motion filed by the state in York County Court.

When the judge allowed the district to go into receivership, control of almost all functions except taxation went to the Chief Recovery Officer David Meckley.

“Consequently, at the time that he filed the notice of appeal, the (school district) solicitor had no lawful authority to appeal the order on behalf of the district,” the state argues.

And Meckley did not approve the appeal to unseat himself.

That this is ridiculous should need no explanation. There can be no justice when wronged parties lose the ability to petition for a redress of grievances in a court of law.

If the court rules for the state, one could easily imagine a murderer getting off because his victim was unavailable to testify. Or a thief might complain that the original owner has no right to sue because he no longer owns the item in question.

But what’s obvious to you and me is sometimes obscure to judges.

The state also accuses York School Directors of violating the state’s open meeting “Sunshine” laws by voting to appeal the decision in a closed meeting.

The school board should have voted to authorize the appeal during an open meeting in full view of the public, the state alleges.

While the state’s first objection is absurd, this one is simply incorrect. School boards are – in fact – allowed to vote behind closed doors in executive sessions for various reasons including litigation matters. School boards are given this right because if they had to discuss legal matters publicly, they could easily endanger their cases.

A judge is expected to rule on the state’s motion Tuesday.

It’s just another sad page in a history of governmental overreach and circular logic in York, Pennsylvania.

First, outgoing Governor Tom Corbett slashes $1 billion from education funding, taking the lion’s share from impoverished districts like York that need it the most. For York Schools that was an $8.4 million cut – over 15% of the district’s budget.

Then when York can’t cope with the loss of funding nor does it have the tax base to make up the difference, the state labels the district a failure.

So the state swoops in to save the day – not with the money the district desperately needs – but with a bureaucrat to come up with a recovery plan: Meckley.

And what a plan it is! Let’s try these few targeted reforms, tighten our belts and if that doesn’t work, give the entire district over to a charter school operator.

How will that help?

It’s funny, but no one ever answers that question. They just assume it makes sense.

Unfortunately, the school board approved this plan in 2013, but it was having second thoughts. Thus the bid by the state Department of Education to take it over and let Meckley continue with his privatization scheme.

Let’s hope the court doesn’t fall for the Mad Hatter defense against appeal.

Even if the judge allows the appeal to move forward, the court still needs to decide who controls York Schools in the meantime.

One would assume it should be the school board.

That seems to be a no brainer.

Obviously the state shouldn’t be in control of York Schools until the appeals process is completed.

Obviously Meckley shouldn’t be able to move forward with charterizing the district until his legal right to do so has been firmly established.

But in York, a “no brainer” no longer means something obvious – it often means people with no brains get to make the decisions.

The district’s appeal isn’t the only one.

The matter should be tied up in court for a while. However, this move by the state and the question of who controls York in the meantime may make the court’s other actions irrelevant.

The Corbett administration – which backs the privatization of York – has only a few weeks left before Governor-elect Tom Wolf takes office on Jan. 20.

Wolf has said he is not in favor of privatizing the district. In fact, he asked the Corbett administration to hold off on the state takeover until the Gov.-elect takes office.

One could easily read this motion to strike the school district’s appeal and remain in control of the district as a last ditch effort to push through a charterization scheme that no one else seems to want.

When Wolf takes office, he could easily direct the state Department of Education to drop the whole matter, return control of York Schools to its duly-elected school board and create a recovery plan that makes sense.

But if this matter is settled before he takes office, his power to intervene becomes questionable.

So once again in York, the rule of the people hangs by a thread.

Will it hold for just a few more weeks?

-This article was also published in the LA Progressive and on the Badass Teachers Association blog.

-Please sign the petition from York residents asking the PA Department of Education drop the petition for receivership, replace David Meckley as Chief Recovery Officer, and to approve a new recovery plan that does not include turning the school district over to charter schools.

-Feel free to use the following memes created by madly talented BAT Sue Goncarovs to help spread awareness of the injustice unfolding in York: 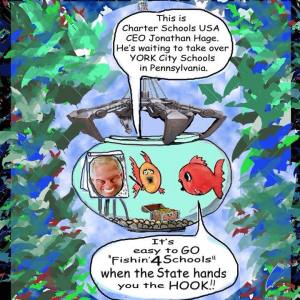