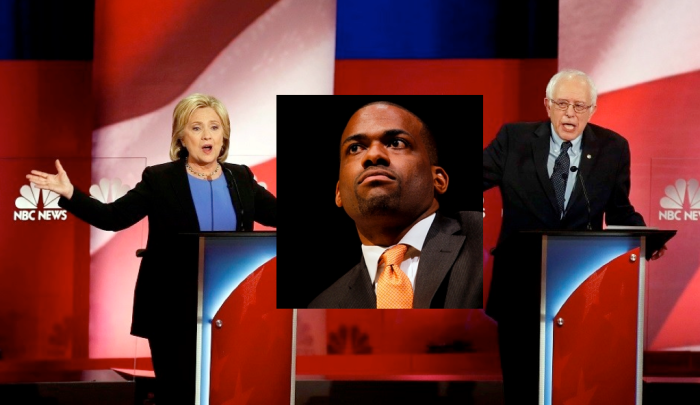 To me that’s an endorsement.

But to Shavar Jeffries, it’s a condemnation.

Jeffries took to the pages of the New York Daily News to decry Sanders position and champion Hillary Clinton’s.

Jeffries is the executive director of Democrats for Education Reform (DFER), a hedge fund front promoting the privatization of public education.

Despite its name, the group doesn’t represent the views of most Democrats. It represents the neoliberal branch of the party that has heavily influenced the education policy of Barack Obama, Arne Duncan, Cory Booker, Bill Gates and other prominent so-called liberals.

One can see why Jeffries isn’t Feeling The Bern. Sanders famously said THIS in January about the industry DFER promotes:

I’m not in favor of privately run charter schools. If we are going to have a strong democracy and be competitive globally, we need the best educated people in the world. I believe in public education; I went to public schools my whole life, so I think rather than give tax breaks to billionaires, I think we invest in teachers and we invest in public education. I really do.

More to Jeffries’ taste is Hillary Clinton who he says backed off on her own charter school criticism.

Back in November, Clinton correctly condemned most charter schools for not enrolling the most challenging students.

Most charter schools — I don’t want to say every one — but most charter schools, they don’t take the hardest-to-teach kids, or, if they do, they don’t keep them. And so the public schools are often in a no-win situation, because they do, thankfully, take everybody, and then they don’t get the resources or the help and support that they need to be able to take care of every child’s education.

Anne O-Leary, a Clinton aide, eventually clarified these comments saying Clinton supports those charters that are both equitable and accountable.

Neither candidate for the Democratic nomination for President has given an in-depth policy speech on K-12 education.

These statements on charter schools are some of the most substantial made by either candidate on the issue.

Clinton has been lambasted in the media for her comments. Many publications – leaning both left and right – complained that she was caving in to powerful teachers unions like the National Education Association (NEA) and the American Federation of Teachers (AFT) both of which endorsed her in the primaries. On the other hand, Clinton also has been criticized for not going far enough against the school privatization industry. Some observers highlight her continuing ties to Wall Street and many of the same neoliberal figures responsible for our disastrous corporate education reform policies.

By contrast, Bernie’s comments have been met with mostly praise from his base and shrugs from his opponents.

Back in 1998, Congressman Sanders voted in favor of the Charter School Expansion Act. Now he’s against the industry. Meanwhile, Clinton has long been a champion of charter schools. Her criticism of some of these schools is a new wrinkle.

It’s nice to see the issue getting some attention.

Charter schools have increased exponentially across the country in the last two decades, but they have little transparency or accountability. As a result, monetary scandals have exploded like wildfire from state-to-state. Millions of public dollars have disappeared into private corporations’ bank accounts leaving little to show for it.

Nationally, research shows that charter schools do no better at educating children than public schools. In fact, in many cases they do a much worse job. And when it comes to cyber charter schools, the situation is even more unevenly stacked in traditional public school’s favor.

Scandals also are surfacing about how charters treat their students. Stories of harsh discipline policies and violating students rights are emerging everyday. Moreover, there are countless accusations that – as Clinton points out – many charters select only the easiest students to educate and sometimes expel struggling students before state-mandated standardized tests.

Finally, charters increase the cost of educating children in a particular district by adding another parallel school system. However, these extra costs are taken out of the traditional public school’s budget thereby further destabilizing it and forcing less services and higher class sizes for students who don’t enroll in new charters.

I’m glad both Democratic candidates are critical of this status quo.

However, Jeffries denunciation of Sanders and defense of Clinton may backfire.

If an odious organization like DFER is in favor of Clinton, shouldn’t the rest of us back Sanders?