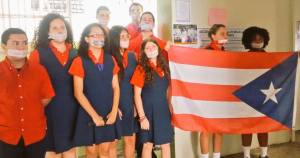 Students streamed out of their classrooms chanting in unison in the mountainous Utuado region of Puerto Rico earlier this month.

They took over the halls and doorways of Luis Muñoz Rivera High School on Thursday, Sept. 10, locking their arms together to create a human chain.

They paralyzed their school, shut it down, and allowed no one in or out.

The reason? Not too much homework. Not lack of choice in the cafeteria. Not an unfair dress code.

These roughly 100 teenagers were protesting the loss of their teachers. And they vowed to occupy their own school until the government gave them back.

Six educators had been ordered to other schools, which would have ballooned classes at the Rivera School to 35-40 students per classroom.

Government officials claimed the high school had too few students to justify the cost. However, with more than 500 young people enrolled, the school has more than double the island average.

“These teachers provide education to almost 140 students,” said Sharymel Montalvo Vélez, a senior at the school. “Do you think this is not enough (to justify the) tuition?”

“Those teachers are excellent. I was their student. I learned with them. I’m grateful for it. Their teaching quality is amazing. I can prove that.”

The students including Vélez, 17, called an assembly to discuss the situation where they voted unanimously to take action. They blocked two gates and wrote a document demanding the Puerto Rican Department of Education revoke the decision to remove their teachers.

Later that day, Sonia González, a representative of the Secretary of Education, met with students and signed the document promising to keep the teachers at the Rivera School. Three parents and one student also signed.

Vélez said she’s surprised the government agreed to students’ demands. “ I was willing to keep the strike all the time necessary to solve our problem and get our teachers back,” she said.

“I experienced a large class size some years back, and it was hard on both teacher and students. It’s not that easy to make 30 students understand something and go explaining it chair by chair. Every student likes to show his/her ideas and in a large class there is not enough time for everyone.”

What happened in the Rivera School is not an isolated incident. All across the island, communities are fighting government mandates to relocate teachers, increase class size and shutter more schools.

This Tuesday at Pablo Casals School, an arts institution in Bayamon along the north coast, students protested the government decision to relocate their theater teacher, Heyda Salaman.

About 100 students hung the Puerto Rican flag upside down and taped their mouths shut to represent the state of the government and the silence officials expect from the community.

Young people at the specialized arts school which offers visual arts, theater, music and dance as well as academic classes, protested with music and chants of “injustice!”

Just like in the case of the Rivera School, the government eventually relented and agreed to keep the teacher with her students.

“The Teachers Federation from Puerto Rico is proud of the actions these students performed,” said union president Mercedes Martinez about student actions at both facilities.

“Schools belong to our communities according to the law, so the communities have every right to fight for the school they deserve. No more cutting funds to create over-sized classrooms.”

“We have a good education and excellent teachers but the administration is failing their workers,” she said.

“The government is cutting rights and benefits to the teachers and employees and soon there will be no teachers. Maybe our schools get privatized and then only people with money will send their children to (public) school.”

The Commonwealth government has closed 150 schools in the past 5 years in the U.S. Territory.

Officials warn the government may be out of money to pay its bills by as early as 2016. Over the next five years, it may have to close nearly 600 more schools – almost half of the remaining facilities!

The island is besieged by vulture capitalists encouraging damaging rewrites to the tax code while buying and selling Puerto Rican debt.

Hundreds of American private equity moguls and entrepreneurs are using the Commonwealth as a tax haven.

As a result, tax revenues to fund public goods like education are drying up while the super rich rake in profits.

The indigenous population has suffered at the hands of western conquerors since Columbus, but the newest fruit of Colonialism may be these corporate education reform policies.

But they have had enough. They aren’t going to accept the low expectations of the corporate world about what constitutes a fair education.

NOTE: This article also was quoted extensively on Diane Ravitch’s blog and published in full on the Badass Teachers Association blog.

16 thoughts on “In Puerto Rico, Students Go On Strike to Stop Teacher Relocations”