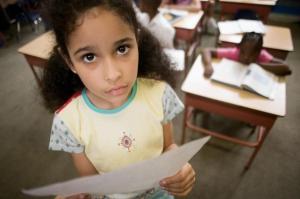 At least it felt that way as my wife dragged me through elementary school hallways.

Racing past me were walls of multicolored palm print turkeys. Was it my imagination or did their googly eyes seem somewhat disapproving of my lateness and attire?

At least, it was my first as a parent and not as a teacher.

I was used to sitting on the other side of the table, notes organized in a neat little pile.

“Oh, you’re Jimmy’s father? So GLAAAD you could make it.”

I was just a daddy. And Mommy was pulling my arm free from its socket trying to get us to the classroom on time.

There was just so much to see, frankly. I had never realized before how little of the school parents usually get to observe. At the district where I teach, I know my building like a second skin. But we don’t live where I work.

As parents, we’re invited into the auditorium, gymnasium, offices, and athletic fields. But we rarely get a peek at the inside of a classroom. You know? The place where our children spend most of their days!

“Oh my God! Is that her music lab? It looks amazing! Honey, take a look at all the instruments…”

But she just gave me the Eyes of Death. It was time to go.

We arrived at my daughter’s classroom exactly on time, thank you very much.

The teacher met us at the door wearing a Disney print dress beneath a wide smile. Hands shaken, greeting given, she immediately ushered us into seats.

They were miniature toddler seats – perfect for Kindergarten butts, a bit condensed for mine. But they held up heroically.

I already had met the teacher during an open house at the beginning of the year. She seemed an excellent educator and my little sweetheart loved her.

However, being in the parent’s seat listening to her presentation was both enlightening and bizarre.

It was surreal to sit there and listen to a report about this child’s academic life as if I had no idea what she was like. After all, I was her first teacher. I taught her to walk and use the potty. Even today she refuses to touch her homework unless I’m there to help.

Yes, she has homework almost every night. In Kindergarten, yes. After a full day in school, too.

When I was in her grade, my mother would usually walk me home at noon for a nice lunch and an afternoon of play. My daughter, on the other hand, eats in the cafeteria. For free! All the students get free lunches regardless of parental income. And then they return to class for a full afternoon of study.

She loves it, though. One of her favorite parts of the day is lunch. She might not tell me what story the teacher read to the class, but she’ll always tell me what she ate for lunch.

Anyway, her teacher was sitting across the table from us giving a full report on our daughter’s daily activities. It was mostly positive but being a teacher, myself, I could pick up on a few euphemisms.

Translation: she won’t shut up.

“She is so independent!”

But I know my little girl. The teacher wasn’t telling me anything new.

I really enjoyed the personal stories.   Apparently my little one sometimes uses her feminine whiles to get the boys to take out her pencil or open her book for her.

I loved the story where my sweetheart darling child asked the teacher to take her home after school. Not home to my house, either. Home to the teacher’s house.

We all had a good laugh about that one.

And then out came the standardized test scores.

I guess I should have expected it. Somewhere in my thick brain I knew standardized testing had trickled down all the way to Kindergarten. But it was so early in the year. I hadn’t expected it to happen yet. I had vague thoughts about opting her out of all that nonsense.

Many schools try to keep it a secret but your kids don’t have to participate in standardized testing. You can choose to opt them out under a religious exemption. All it takes usually is a visit to the principal and a request in writing.

But it was too late. My daughter’s scores were here already.

So I looked at them.

In my mind, my little girl is pretty advanced. After all, she’s literate. And, yes, I’m proud of that fact.

While most of her classmates are still fine-tuning the alphabet, my baby can already read a “Biscuit the Puppy” book from start to finish. And she can write, too. Just the other day she wrote me a note saying that she “LOVES DADDA.” The A’s looked a bit like H’s but I got the message.

However, when we looked at the test sheet, most of her scores were in the proficient range – a few advanced. The teacher said that unless my girl was reading chapter books at this age, she couldn’t score much above proficient.

That’s Common Core for you. They call it “rigor.” You’re at the head of the class and you’re only okay. This girl has had three years of preschool, we read with her everyday, practice writing, math, arts and crafts, etc. But the standardized test scores say, “Eh. You’re alright. Nothing special.”

It’s a good thing she’s too young to get these scores, herself. She’d be crushed.

Don’t mistake any of this for objectivity. I’m not a teacher here. I’m a daddy and daddy’s aren’t objective at all.

The teacher must have seen the look on my face. She conspiratorially let us in on her doubts about testing kids at this young age. She told us how she split up the testing period to fit the kids’ attention spans, and how it just sapped their energy and bored them, anyway.

I felt horrible. Here I am, Mr. Anti-Corporate Education Reform Blogger Guy, but my precious baby is losing time with blocks and “Clifford: the Big Red Dog” in favor of fill-in-the-bubble testing designed to make her prestigious achievements look small and mundane.

I should have known. While she was testing in her school, I was probably in my own classroom proctoring the middle school version of the same darn test. It’s one of many practice tests kids take before the real thing.

I wanted to ask the teacher to tell me more, to tell me if she supported opting my daughter out of future tests. But the look on her face didn’t invite further questions.

It’s a difficult situation. Most teachers hate the toxic testing regime. They know that multiple choice bubble tests are a terrible indicator of content knowledge – not to mention developmentally inappropriate for children my daughter’s age. But Wall Street hedge fund managers seeking to make a quick buck lobby politicians who put pressure on superintendents who order administrators to force teachers to do things under the guise of education that are really just about corporate profits. And if teachers in the workplace are too vocally against this scheme, they put a target on their backs.

I didn’t want to do that to my daughter’s teacher. I trust her. I know she’s a good teacher, I know my daughter loves her and I know where she’s coming from even without her vocalizing it.

Anyway, the meeting was quickly over. With a laugh and a smile, the teacher ushered us out the door so she could begin her next conference.

How many times have I been on that side of things – talking to parents about their kids? At least several hundred times. Almost definitely more.

But I left that meeting with a new sense of purpose.  I would opt my daughter out of her next standardized test. I would not allow the testing machine to feed on my precious child’s data.

I would listen to her teacher and my own misgivings.

Parent-teacher conferences were over. But it’s way past time to arrange a conference with the principal.

I grabbed my wife’s hand and pulled her after me.