Skip to content
HomeDissent – The Most “Un-American” American Value 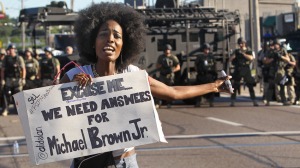 Don’t you know that what you’ve just said has caused this horrible tragedy!?

It’s ironic that in a country born from dissent, the most popular message the powerful have for the powerless is “shut up.”

When two NYPD officers were ambushed and murdered by a madman on Saturday, the media was quick to point out his motive. Allegedly, the “execution style” shootings of Officers Rafael Ramos and Wenijan Lui were in retaliation for the deaths of Eric Garner and Michael Brown – unarmed black men killed by police.

When Mayor Bill de Blasio entered a press conference to speak about the murders, police turned their back on him. The reason? The mayor had been outspoken against a grand jury decision that Garner’s death didn’t need to be investigated with a full criminal trial of the officer who killed him.

Criticism was even worse in an internal department memo which accuses de Blasio of having his hands “literally dripping with our [NYPD’s] blood because of his actions and policies” and that the NYPD is now “a ‘wartime’ police department”  that will “act accordingly”.

What does that even mean? Who exactly is the NYPD at war with – the people its officers swore to protect and serve?

But perhaps more troubling is the insinuation of guilt – that the mayor caused this tragedy because of his criticisms of police brutality.

Across the country, on social media, between friends and family the same pattern emerges. People complain the death of these police officers is because of the nationwide protests against a wave of police killings of unarmed black men.

If only people hadn’t spoken up, Ramos and Lui would still be alive!?

America has a history of crazy people doing all kinds of crazy things for just as many crazy reasons.

When Ted Kaczynski, the “Unabomber,” killed 3 people and injured 23 with home-made bombs because of his hatred of modern technology, no one blamed Apple computers.

When John Hinckley shot President Reagan to get the attention of Jodie Foster, no one blamed the Academy Award winning actress.

When Brenda Spencer fatally shot a principal and custodian and injured eight children and a police officer from her home across the street from a school because she “didn’t like Mondays”… Well, we still have Mondays.

But suddenly when a lunatic’s motives are politically expedient, they’re justified.

Millions of people all across the country have taken to the streets to protest a racist system of justice that doesn’t hold police accountable for killing unarmed black men. We could confront that system and change it, or we could try to shush those calling for reform.

What’s worse, protestors are shamed into silence. Before they can continue to air their grievances, they’re told they must stop and recognize the tragedy of Ramos and Lui’s death. Of course these murders were despicable! But what does that have to do with us?

Once again the powerless have to repeatedly condemn violence while the powerful have no such mandate put on them. Ex-Ferguson Police Officer Darren Wilson hasn’t offered any regret over his fatal shooting of Michael Brown. He went on national television and said he’d do the same thing again.

Before this story broke, the nation was reeling from the Senate Intelligence Committee report on CIA torture. The report details actions by CIA officials including torturing prisoners, lying to government officials and the media, harsher treatment than was previously disclosed, and the failure of the program to obtain accurate information.

Senator Dianne Feinstein made the rounds explaining the report to congress and the media. CNN’s Wolf Blitzer echoed many pundits when he asked her if the release of the report made America less safe.

What a stupid question!? The report didn’t make America less safe. The fact that America tortured people made us less safe!

But again we have attempts to squash dissent with appeals to shame and fear.

Why did you speak up, Sen. Feinstein? If you had remained silent about the heinous actions done in our name, we would remain safe and secure.

We used to hold freedom of speech as one of our most cherished values. It was a point of pride. Now it’s a dusty trophy on the mantle that we rarely practice in public. It’s just not worth the effort.

That’s a lesson North Korea learned this week. After hacking Sony Pictures and making threats against movie theaters that showed the Seth Rogan comedy “The Interview,” the film company pulled the picture from distribution. After all, the movie made fun of Kim Jong-un in a plot where the American government fictitiously planned to assassinate him with late night talk show hosts.

There was a time when the United States would not abide by such terrorism and threats.

That time has passed.

We not only bow down to foreign powers, we attempt the same kind of coercion for our own people.

How dare you say THAT! You are causing harm by speaking THIS WAY.

How dare you speak out against Great Britain! Sure, we have no say in our own government, but speaking out will only bring on more tragedy.

Dissent has truly become the most “Un-American” American value.

This article was also published in the LA Progressive and Badass Teachers Association Blog.

8 thoughts on “Dissent – The Most “Un-American” American Value”