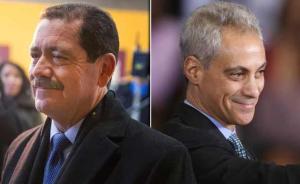 It’s a headline that shouldn’t surprise anyone – but it does.

All the polls told us this would happen. Rahm just had too much money. Emanuel raised nearly $23 million compared to Garcia’s little more than $6 million.

That buys an awful lot of television commercials, advertisements, and confidence.

Emanuel had 20 different ads that aired over 7,000 times!

Even if you aren’t paying direct attention to it, after a while that kind of repetition seeps into your bones.

Even if you don’t want it to be true, even if you fight against it, there’s a part of you that can’t help but believe it.

It’s like being trapped in the coils of a monetary anaconda that looks you right in the eyes as it squeezes the life out of you and unhinges its jaw!

How else could Rahm win? His attempts to goose the city’s sluggish economy were nothing but an attack on the poor and minorities. He closed public health clinics, 50 public schools and installed red light cameras to raise fees. And none of it even worked!

You might think it’s counter-intuitive that money matters so much, but history disagrees. This is how it plays out almost every time. The candidate with the most green wins.

Gov. Andrew Cuomo raised $30.5 million fending off challenger Zephyr Teachout. She raised only $600,000. And we all remember how that turned out.

Without the constant stream of campaign ads and only the bad taste of his actual policies, Cuomo’s popularity now is lower than it’s ever been. And that election was only half a year ago!

Buyers remorse? Sure! But just wait until the next campaign and a truckload of donor’s money to temporarily hypnotize people they should think otherwise and voila! Instant approval. Just add money!

But there’s good news in this nest of vipers, too.

Consider this: both races were internal. These were Democrats vs. Democrats.

But were they really? Rahm’s top donors were conservative billionaires. These are the same folks backing Scott Walker, Mike Pence and Mitt Romney!

The media is trying to spin this as the Elizabeth Warren wing of the party vs. the business wing.

Nonsense! It’s real, grassroots progressives vs. the DINOs – the Democrats In Name Only! And the DINOs keep winning!

But take heart. The future doesn’t belong to dinosaurs.

Look at how far Chuy Garcia pushed Rahm Emanuel! He got enough votes in the primary to force this runoff election. It was no cakewalk for Emanuel.

The people lost this one, but we will remember it.

Neither of these were high turnout elections. We don’t have that anymore in America.

No matter who is running, no matter what’s at stake, the public is so gripped by a sense of helpless apathy that most people don’t even show up at the polls to cast a vote.

But every time we have an election like this one, we stir people up. We fill them with passion. We make them care.

I knew Chuy Garcia had very little chance of winning, but I wanted it anyway.

I read up on him, talked to people, posted on facebook, sent out a barrage of tweets every day.

And I’ve never even been to Chicago!

But Chuy’s campaign meant something to me. It still does. Even with the election lost.

There is a growing majority of people who feel the same way. We care about closing 50 public schools for minorities. We care about local government control. It matters to us that our society is run justly, morally, progressively.

We repudiate the business model, the worship of money and profit at the expense of all else.

And there are more of us everyday.

But what happens on the day when they open the polls and we all show up?

What happens when that passion spurs us – all of us – to actually get out and vote?

What happens when we drown out the drone of campaign commercials with the certainty of what is right?

I think on that day, the Rahm’s and Cuomo’s will fail. On that day the DINOs go extinct.

On that day, we take back our party and our Democracy itself.

“They tried to bury us. They didn’t know we were seeds.”
-Mexican proverb

NOTE: This article was also published in the LA Progressive and the Badass Teachers Association blog.