Skip to content
HomeI Am So Sick of White People’s Excuses (And I’m White!) 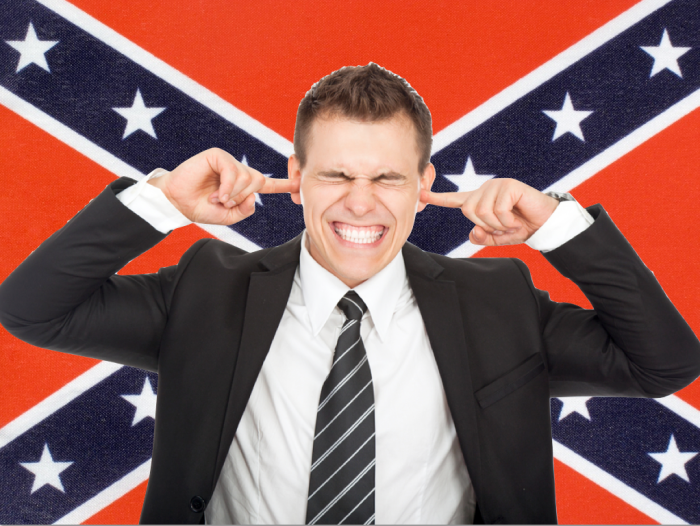 What the heck is wrong with us, white people?

Systematic racism is all around, but we refuse to see it.

Oh, and I do mean REFUSE. It’s not a matter of being unable to see it. Our eyes and minds work just as well as anyone else’s. We can perceive reality. Too many of us just choose not to.

According to the Guardian, at least 793 Americans have been killed by police so far this year. That number includes 194 black people or 4.86 per million. That’s more than double the rate for white people at 1.96 per million.

This is not an opinion. This is an undeniable fact. Every number is backed up with verifiable data. And moreover, it follows the same pattern we’ve seen for a couple of years now since news organizations have taken up the slack from the federal government and started counting.

Why does that not worry more white people? It worries me. I don’t want to live in a country where police use lethal force so often against civilians, so much more than almost any other developed country on Earth. And I don’t want my black friends and neighbors to be targeted so much more.

I’m a middle school teacher. Most of my students are black. I don’t want to have to worry that they or their parents are going to be murdered just because of an excess of melanin. Street gangs are worrisome enough without having to add into the mix many of the very law enforcement officers that are supposed to keep us safe from those gangbangers.

But when you bring this up to white folks and other facts detailing the systemic racism that pervades our society, you get every excuse in the book.

They simply refuse to engage with what you’re saying. They deflect and redirect and change the subject – and they don’t even seem to realize they’re doing it.

Blue lives matter, they say. All lives matter. Every form of life seems to matter to white people – except explicitly black lives.

We seem to think it’s impossible to care about both police and African Americans. We seem to think any expression of the value of human life has to be universal without mentioning individual groups that are at a higher risk than others.

It’s wacko, clearly a way of shutting down a conversation white folks will do anything to avoid.

The easiest dodge seems to be talking about black-on-black crime. As if somehow that makes it right.

Of course what they omit is that the same is true for white Americans. White folks kill each other much more than any other race does. But you never see people wringing their hands about white-on-white crime, do you?

Moreover, it’s irrelevant. If I point to a single incident of a white person killing a black person, it is not therefore justified because black people kill black people more often. Would you think an African American is justified for popping a cap in your Caucasian mom’s ass because most of us, honkies, usually off other honkies? Of course not!

But so much for logic. One of the most popular evasions is to blame it all on inferior black culture.

It goes like this: Black people don’t suffer systemic racism. If there are any ways in which they are selected against in society, it’s because they’ve earned that treatment because of the way they act.

Black people come from unmarried parents. They are on Welfare and a host of other social ills. THESE are the reasons behind so-called racism, not unjust systems.

How does coming from unmarried parents mean you deserve to be killed by police at a greater rate than white people? How does parental marital status affect the justice system handing out more severe and longer sentences for blacks than for whites who commit the same crimes? How does the Facebook status of your pops and your moms somehow translate into difficulty getting a job due to your black sounding name?

In short, the two have nothing to do with each other.

Yes, black people have children out of wedlock about twice as often as white people. So what? Some people aren’t meant to be married. Often it’s better for the children if the parents don’t stay married to people who mistreat each other, a marriage where there is no love. Would racism suddenly disappear if black people just kept their chins up and married each other irregardless of whether the relationship was healthy for them and their children?

Let’s get to what white people are really saying here. Whites aren’t saying marriage is a magical shield against prejudice. They’re saying: Damn! Look at these strangers! These others! These people who aren’t like you and me!

The fact that many of them don’t get married before having children just shows how morally inferior they are to us. They deserve their treatment because they don’t share our sensibilities.

This is a pretty heartless way to think. Not only do the parents, apparently, deserve to be selected against, but so do their kids who had nothing to do with whether daddy gave mommy a ring or not. Moreover, where did the culture of marriageless childbirth come from for black people? When their ancestors were kidnapped from Africa and brought to these shores as slaves, it was the white slave masters who forbade them from marrying. In many cases, that tradition doesn’t exist because we took it away. Meanwhile, about a quarter of white couples have children out of wedlock, too. What’s our excuse?

But this won’t be enough to convince most white interlocutors.

They’ll just huff and puff and spout some nonsense about welfare.

They’ll say Black people fall into immoral and violent behavior because they’ve been taught by liberals to exist on welfare and not get jobs of their own.

Again, the problem is black people, themselves, aided by bleeding heart liberals trying to give them a helping hand. Some white folks even go so far as to say this is real racism because by giving black folks such sweet benefits for not working, liberals purposefully destroyed black people’s natural inclination to productivity.

Think about it for about two seconds, and you can see how crazy it is.

Or alternatively, they deserve not to get call backs when they turn in resumes with black sounding names because they’re lazy!? These people just handed in job applications. We can imagine they did that because they wanted freaking jobs! But being lazy makes them unqualified for the very jobs they tried to apply for in the first place?

Let’s look at the facts for a moment. Black people don’t accept the Supplemental Nutrition Assistance Program (SNAP) more than whites. It’s the other way around.

But that’s raw data. When we look at it as a percentage of the population, black people are twice as likely to be on Welfare as Whites. Only 12% of the country is African American, after all.

So why bring up the raw data? Because if you’re upset about the sheer numbers of people on assistance, you’re mad at more white people than black people.

Moreover, black people actually need it more than whites. More than 27% of black people live in poverty compared to only 10% of whites. Hence the larger percentage of blacks on SNAP.

This isn’t meant to throw anyone under the bus for being on public assistance. Times are tough and well paying jobs are hard to come by. For instance, most of the people who accept SNAP benefits actually are employed, but their pay is too small to sustain them. Thanks, Walmart.

So how much does a family of four get on SNAP? It depends on how much money the household earns, but the total income must be below the federal poverty level – $23,050. For many families it comes to about $399 a month. That’s $1.10 per person, per meal.

This isn’t exactly living high off the hog. I can’t imagine anyone making bank who would throw it all away to live so luxuriously on food stamps.

However, this is exactly what a lot of white people think about blacks.

It goes against the facts, and it doesn’t explain the reality of systemic racism.

In so many ways our society is set up to give white people an advantage and black people a disadvantage. That doesn’t mean all white people have it perfectly. There are an awful lot of dirt poor white folks out there – many of their kids are in my classes, too. But while they may be disadvantaged socially, economically or many other ways, they aren’t disadvantaged racially.

Racism still exists and talking about it doesn’t make you anti-white. It makes you pro-black and pro-justice.

Those aren’t bad things to be.

We, white people, have to stop being so fragile when racism is brought up. Though I’ve artificially concerned myself only with black people here, we need to listen to what all people of color are telling us about how they’re treated. We need to take a hard look at the facts.

Being white and admitting racism exists doesn’t make you a racist – though you probably benefit from it. It just means that if you want to stand on the right side of history, on the side of equity and justice, you may need to bring your thinking into agreement with reality.