White people will go a long way to avoid talking about racism.

Not only does it seem invisible to most melanin deficient folks like myself, but we refuse to acknowledge it when someone tries to bring it to our attention.

That’s not racism. There is no racism. Stop stirring up trouble.

Unless someone is wearing a white sheet and burning a cross on a black person’s lawn, most Caucasians close their eyes, stick their fingers in their ears and stay willfully blind.

Sociologists call this White Fragility, and it was on full display in the media response to the Million Man March Forward on Saturday.

Thousands of African Americans and a smattering of people of other races and ethnicities gathered in the National Mall in Washington, D.C., to demand “Justice or Else” and commemorate the 20th anniversary of the original Million Man March.

Like during that 1995 gathering, today’s media was quick to frame the narrative in a way that silenced legitimate black concerns while benefiting White America.

First, most media outlets refused to cover the event at all. I guess to them there was nothing newsworthy going on. Just tens of thousands of black folks gathering in the nation’s capital. No saggy pants. No guns. Nothing to see here.

When the mainstream news covered it at all, it was to minimized its importance. Short articles basically saying – Here were some black people. Remember that time they did this before? In other news…

I remember the first march back in the 90s. I wasn’t there, but I remember how white folks talked about it. At first there was a genuine fear – black people with a united purpose coming together to better their social standing!? But we quickly found a way to negate everything they were doing.

Har! Har! Look at all those black folks gathered in front of the Capital steps. They held a Million Man March and didn’t even get a million men!

And therefore by the logic of white fragility we can ignore everything they did and said.

Racial prejudice in hiring and firing employees? Not a million. Can’t hear you!

Police brutality? Come back when you’ve got more people!

Of course it’s still a major point of contention exactly how many bodies showed up that first time. Estimates of the original rally put between 400,000 to 2 million folks on the scene. Unsurprisingly white people almost always go with the smaller number. I guess they don’t think black people can count that high.

But what if the lower estimation is true? Is there some racial math that bestows relevance on a moral crusade based only on sheer numbers? Is it okay to deny a handful of people their rights, a thousand or even a hundred thousand – but somehow a million is the tipping point where I have to say “No more”?

Even if only hundreds of thousands of people showed up, that’s something. Quite a lot, really. Doesn’t that demonstrate an attempt at racial unity, at addressing a shared list of problems? After all, how many people need to attend for White America to take them seriously?

This weekend journalists were careful not to make estimates of the number of attendees at the March Forward. But they’d subtly state that it was less well attended than the previous rally which – given the pictures I’ve seen of both events and the above mentioned disparity – seems somewhat hard to corroborate.

Still the media didn’t stop there. They found other ways to invalidate the event.

For instance, who is leading these marches? The Nation of Islam? Louis Farrakhan? Oh my! White people don’t approve of that! Therefore the whole gathering is unjustified. Poof!

Funny how that works. Black leaders must be perfect. White leaders? Not so much. George W. Bush was a C-student. Bill Clinton had extramarital affairs. Both men served as two-term presidents, and somehow the Republicans and Democrats go on.

Finally there was the rhetoric. This rally was subtitled “Justice or Else.”

That just won’t do. Angry black people demanding justice? No, white people simply will not respond to that kind of tone. If only they had been more polite about it, we might listen, but “Justice or else”!? Nope.

Any rational human being should be able to comprehend why black folks are demanding justice; They aren’t getting much of it from our courts. Unarmed black people are increasingly being murdered by the police and white citizens which prompts the debate of whether a crime has even been committed – a debate in which the answer is often, “No.”

The Black Lives Matter movement has grown because of just such concerns and the group was even represented at the rally.

But white folks – in the guise of analysis – ask what that phrase means “justice or else.” Are black people threatening to attack white people if they don’t get justice? What justice is there beyond a court of law? Do they really expect us to change our laws and hold our courts accountable?

No. Nothing to see here, folks. This throng of humanity peacefully assembling clearly has no valid points to make. Turn the cameras off. Let’s go home.

But had these thousands suddenly thrown bottles, overturned cars or started fires, the spot light would have been turned on full force.

“Another black riot,” newscasters would have proclaimed with glee. CNN would have devoted 24-hour news coverage. Expensive graphics would show the exact extent of the damage between interviews with scared white folks wondering why black people were allowed to misbehave so!

But a peaceful rally of African Americans coming together to share their pain, commemorate their history of struggle and commit to solutions?

As a representative of the white race, may I make a suggestion? Could we possibly consider listening to what these people have to say? And before rejecting it out of hand, might we look at it objectively and even find a valid point or two? Could we then try to offer our black brothers and sisters a hand?

But the answer is always the same from white folks. Excuse after excuse to ignore, reject, repulse and keep our fragile white eyes firmly shut. 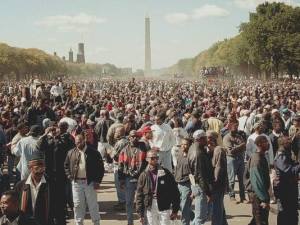 NOTE: This article also was published in the LA Progressive and on the Badass Teachers Association blog.