The conviction of 11 former Atlanta public school teachers for cheating on students standardized tests has little to do with what these people actually did or didn’t do.

It is meant as a message for the entire education profession: if you cheat on standardized tests, you will be given the harshest possible punishment!

Don’t get me wrong. These people deserve punishment. They easily deserve to be stripped of their teaching certifications  and to return the bonuses they received for engaging in this activity.

However, they are each looking at a potential 20 year jail sentence for essentially making copies, erasing pencil marks on paper and filling in different bubbles.

It’s only possible because they were charged with and found guilty of racketeering. You know, the same charge we use against organized crime!

The justification given was that bonuses and raises were awarded to the former educators based on test scores. Prosecutors characterized this behavior as participation in a massive criminal conspiracy and charged the former teachers with violating the state’s RICO (Racketeer Influenced and Corrupt Organizations) Act.

I’m not surprised that the state of Georgia tried to use this statute against these people. I am shocked, however, that it held up in court.

These defendants have been charged and found guilty of the same crime as the Hells Angels Motorcycle Club and the Gambino Crime Family.

Changing standardized test answers to make it appear students are doing better than they really are is certainly a crime, but is it really on the same level as the mafia!? Is it the same as extortion, money laundering, loan sharking, obstruction of justice and bribery?

Because those are the crimes usually prosecuted with a RICO charge!

One thing is certain: it’s worse than murder.

According to Georgia law, actually killing somebody will get you a less severe sentence than cheating on standardized tests!

Heck! Even a first degree murder charge leaves you eligible for parole in 30 years! That’s only 10 years more than cheating on a bubble test!

Again, this has nothing to do with what these defendants did. It’s a message to the rest of us.

These people – all of whom are people of color – are being offered as a blood sacrifice on the altar of the testing gods.

Those of a reflective nature have already suggested that what this scandal really shows isn’t the danger of cheating so much as the problems of high stakes testing.

When you hold educators and schools responsible for student test scores, you create an environment rife for cheating. When you threaten to close schools and/or fire educators and/or withhold pay based on factors out of an individual’s control, you are inviting cheating.

People think, “why shouldn’t I cheat? I’m being held to an impossible standard anyway!”

The simple fact is that teachers can’t control how well their students do on standardized tests. Educators do their best to ensure their students are prepared, but it is up to the student to actually take the steps necessary to learn.

We all accept the axiom that you can lead a horse to water but can’t make him drink. We accept it everywhere except in the school room.

Corporations and their proxies making billions off of standardized testing will tout the importance of the teacher in the classroom. And, yes, the teacher is very important – the most important in-school factor. But out-of-school factors are even more vital.

Parental income, child nutrition, the number of books in the home, exposure to violence – all these have a greater impact than the teacher.

We continually refuse to accept this fact.

More than half of all public school students live below the poverty line, but we refuse to offer any real help. We instead offer nothing but standardization – in the form of tests and canned curriculum – and the magic bullet of increased privatization.

No wonder there are some teachers cheating on their students standardized tests!

We’re forcing them to march calmly over a cliff or take extreme measures!

What these teachers did is not excusable. They did the wrong thing. They cheated. They tried to game the system.

What they should have done is expose it.

And there are tens of thousands of people out there right now doing just that!

Every year the anti-standardization movement gets bigger. Every year more teachers and parents refuse the tests.

This court decision is but one more hysterical reaction from our corporate masters to turn the tide. To shut us up.

But we shall not be moved.

You can offer these people up as a blood sacrifice to your dark god, but it is a false deity and we will continue to refuse to worship at its feet.

The days of the Testocracy are numbered. And every day passed is one less in its reign!

NOTE: The article also was published in the LA Progressive, on Education Bloggers Network Website and the Badass Teachers Association blog. 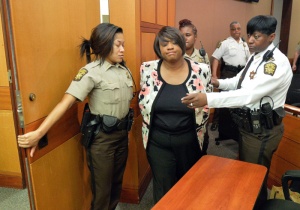