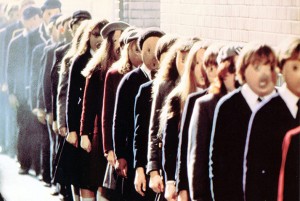 It was just a normal Monday. Two emotionally disturbed students chased each other into my classroom playing keep away with each others’ belongings.

I stopped them, reprimanded them and sent them to opposite corners of the room. Meanwhile the rest of the class hadn’t bothered to begin their warmup activity. I explained the assignment and got them back on track.

Finally, a girl sitting in the front row raised her hand and offered a solution to the problem on the board.

We were back in business and learning could continue.

At the end of class, an administrator stormed in. There was an urgent problem that needed solving immediately.

She was wearing a pink shirt!

When board members enact a school uniform policy – as was just accomplished at my district – they turn every educator in the building into the fashion police.

Individualized instruction, classroom management, content knowledge – all become secondary to the driving force of our schools: who isn’t conforming to the norm?

When did this become our educational philosophy? We should be doing just the opposite.

Schools should be engines of self-discovery and self-expression. In a world of stifling poverty and dangers from within and without, our schools should be places where kids can be themselves. We should be providing them safe places to learn who that is and what their relationship is to the rest of the world.

To be fair, much of this is forced on us from the state and federal government. But now when your local school directors get an opportunity to make a rare decision about how to run their own community schools, they decide to standardize student dress!? They think having everyone look the same in drab colors and similar outfits is going to improve the situation!?

No! It simply continues the trend of turning our children into prisoners and turning our teachers into their wardens.

Case-in-point: my classroom is very cold. Even in summer the air conditioning blows out too much frigid air, and the maintenance department never seems able to adjust it properly.

I’ve almost given up complaining to administrators. After a few introductory attempts, I move on to things I can actually control.

In the past, I’ve simply told my students to bring a jacket. Most of them end up bringing a hoodie, but this year that’s against the dress code. They can wear a certain kind of plain sweatshirt or sweater, but they can’t wear one with a hood.

The result is a class of shivering children many of whom still try gamely to learn. I must admit, even standing there, myself, wearing a suit jacket, I go numb after a while.

So I took pity on my class and allowed them to discretely bring hoodies into class if that was all they had available. Almost immediately after the first student donned the verboten clothing, an administrator looked into my room and saw it. She pulled the student into the hall yelling and screaming that this was the second time the child had been seen wearing a hoodie, and disciplinary action would be taken.

The child turned to me with lost, helpless eyes before I spoke up and took the blame. He got off with a warning and shivered through the rest of my lesson.

Is this really the best use of our educational resources? We have real problems – such as dealing with the consequences of our “lowest responsible bidder” air conditioning service. But instead of tackling any of that, we’re pounding children into submission for a school uniform policy that doesn’t make any sense.

What lesson does it teach? Hoodies are evil? Wearing pink or – God help you! – navy blue will ruin your life!?

No. You must be the same as everyone else or you will be punished for being different.

This is what happens when school directors glance at the mountain of insurmountable problems they’ve volunteered to correct. But instead of solving any of them, they opt for a measure that solves nothing but looks good on paper – the newspaper, specifically.

A school uniform policy allows them to talk tough. We’re taking a strong stance against misbehavior by forcing student to dress the same way. We won’t put up with shenanigans at our school like gangs, violence and freedom of expression!

Do uniforms reduce violence and increase positive behaviors? There is no proof that they do. In every study that claims to prove the efficacy of uniforms for positive behaviors, districts made additional rule and administrative changes to the school environment at the same time. There is no way to isolate uniforms as the one factor among many that caused better behaviors.

What’s worse, there are long-standing, well respected studies that go further and conclude that uniforms are – at best – ineffective and – at worst – actually INCREASE negative behaviors.

Take this 1998 statistical study produced by the University of Notre Dame‘s Sociology Department that studied 10th grade students. Researchers showed that uniforms had no direct effect on “substance abuse, behavioral problems or attendance.” In fact, uniforms actually had a negative effect on student achievements for those students who previously considered themselves ‘pro-school’.

“Student uniform use was not significantly correlated with any of the school commitment variables such as absenteeism, behavior, or substance use (drugs). In addition, students wearing uniforms did not appear to have any significantly different academic preparedness, proschool attitudes, or peer group structures with proschool attitudes than other students.”

What about academics? Supporters claim uniforms will boost academic achievement by removing distractions to learning.

It’s a curious claim to make.

This is why school districts that adopt mandatory school uniforms often see a drop in property values. Mandatory uniforms are a hallmark of failing schools.

Consider what kinds of schools require uniforms. Hint: it’s not the rich suburban ones. It’s the poverty-stricken inner city ones. Specifically, 47% of high-poverty schools reported requiring school uniforms. While only 6% of low poverty schools did the same, according to the US Department of Education.

The National Center for Educational Statistics surveyed both primary and secondary school students from 1988 to 2004. Their conclusion: “Once I control for a number of factors, including race, sex and socioeconomic status… there is little evidence that school uniforms have an impact on student outcomes.”

In short, it’s time to stop reform for reform’s sake. We need to stop reaching for easy answers. Our children deserve better.

We need to give up this strange notion that in the land of the free, the home of the brave, the best ideal we can drum up for our schools is everyone marching in line, wearing the same clothing, thinking the same thoughts. That’s not the American dream. That’s the Communist one!

We’ve got to be okay with difference. In fact, we need to encourage it. Yes, there are limits, but they should be placed back as far as possible.

John Mason wrote, “You were born an original. Don’t die a copy.” Let’s not force our children into a mold.

Let’s guide them, nurture them to become independent thinkers who sometimes shock us with their originality.

Let our decisions today be worthy of the adults they may one day become.

Let them be free.