Skip to content
HomeWhy Are Black People So Nonviolent? And Why Aren’t Whites? 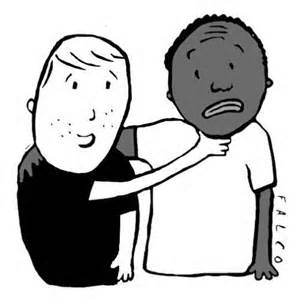 If hate were a sport, I’d bet on white.

Really. We’re good at it.

White people have been hating, brutalizing and killing people way more effectively than black people for – well – ever.

But somehow in the media it’s the black man who is portrayed as the savage.

It’s just not fair. We white folks are so much better at race-based aggression than our darker complected brothers.

Just this Wednesday a white guy walked into a historic African American Church in South Carolina, was accepted as part of the service, stayed for about an hour before shouting a spiteful message and gunning down several parishioners!

Now that’s some hate right there!

But at first the people on my TV refused to give us white folks credit. They were questioning everything from the killer’s motives to his race! As if this had to be a black man in white face persecuting the faithful! Not some kind of hate crime!

Maybe it shouldn’t be surprising that the media narrative always runs counter to the truth of the violent white man and in favor of the myth of the savage black man.

Whenever anyone brings up race and violence, the first thing people mention is crime.

According to a 2013 FBI Uniform Crime Report, when it comes to murder, 90 percent of black victims were killed by black offenders.

However, what people fail to mention is that according to the very same report, 83 percent of white victims were killed by white offenders, too.

These numbers don’t show black people are more violent than white people. They show that BOTH white and black people would rather kill within their own race.

In terms of raw numbers, black people and white people actually commit about the same number of murders. But you wouldn’t know that from the media.

I don’t know why these media types aren’t wringing their hands over the spurt of white violence in this country instead of spending valuable broadcasting minutes exclusively on black people.

You’d almost think they were biased or something, trying to spin the truth, tell you a story that wasn’t entirely factual.

And speaking of bad arguments, this one has suddenly shifted.

We started talking about race-based aggression and we suddenly shifted to all violence. Let’s get back to hate crimes, because that’s really the area where white people excel.

The FBI is charged under the Hate Crime Statistics Act with compiling statistics on spite-based legal transgressions. In its most recent report, for 2013, hate crimes based on race are far more numerous than any other kind.

According to the FBI statistics, 54.5 percent of the reported single-bias hate crimes that were racially motivated in 2013 targeted blacks. Only 16.3% target whites.

But you really didn’t need an FBI report to tell you that, did you? American history is littered with the bodies of beaten and brutalized people of color. You could make a very convincing argument that these dead souls make up the foundation of our country. Would our economy really have been so robust without the free labor of all those slaves? Heck! Would we even have a country at all if we hadn’t murdered all those indigenous peoples in the first place?

I know. You’re going to say that other predominately white countries have violent histories, too. And you’d be right. But notice the difference in our attitudes about it today!

Historically, Germany is no slacker when it comes to racial violence, but is there any government building in the German Republic today that continues to fly a Nazi flag? Absolutely not. In fact, it is illegal to do so.

By contrast, in America we love the stars and bars of the Confederate flag. It still waves proudly over the South Carolina capital building. (But I’m sure that has nothing to do with the violence we saw at that Charleston church I mentioned earlier!)

So let’s put it to rest. When it comes to hate crimes, white folks kill! But don’t feel too bad, black folks. There are things you’re good at, too. Like nonviolent resistance.

Heck! You’re amazing at that!

After all this time, black people have very rarely used violence as a means to achieve their ends, to try to secure the rights and freedoms white America guards so jealously.

In just the past year or so, unarmed black folks have been assaulted or killed for holding toy guns, being suspected of selling loose cigarettes, listening to music at a gas station, asking for help after a car accident, wearing hoodies, wearing bikinis, running, and now just going to church!

And the response from the black community has been pretty darn nonviolent. Yeah there’s been some shouting and looting, but very little beating or killing.

White folks, can you imagine having to undergo such indignity on a daily basis and NOT responding in kind!?

No wonder a blonde white girl from a Christian fundamentalist home darkened her skin, curled her hair and tried to pass as black! Sometimes – often really – it’s darn embarrassing to be white! Black folks have the moral high ground.

Somehow they live in an American society that heaps hatred on their every move and they respond with dignity and perseverance.

So why are black people so nonviolent?

Damned if I know! But I wish us white folks would take a lesson from them.

I think if you factor in poverty, the numbers wash. After all, poor people are generally more violent than those in better circumstances. Since most black people experience higher levels of poverty than most white people, we can only expect higher proportions of murders from them. When your options are limited between working several minimum wage jobs to squeak by or to engage in the drug trade for a higher income bracket, well it’s not surprising. If black folks weren’t subjected to such high poverty rates, we would expect the black murder rate to plummet.

I know some readers won’t accept that answer. And if so, fine. However, this doesn’t affect at all my assertion that black people commit a fraction of the country’s hate crimes. Whether you look at it proportionately or numerically, white folks are MUCH more likely to commit hate crimes than black folks. I think that’s significant.

However, I have received enough correspondence from readers of this article to know that many don’t care. This article has been surprisingly popular. It still gets hundreds of hits every week. Unfortunately, many of the people who seem to find it appear to be those with an axe to grind. WordPress allows me to see what readers type into a search engine to find this article. I can see what sites lead you here. I know that white supremacists and far right conservatives are loving this article as an example of “liberal, white self hate.” The responses to this article in some of the darker corners of the Internet have been as hilarious as they are badly argued. It appears that some people are so committed to the idea that black people are violent that nothing anyone says could convince them otherwise. Moreover, they are so enamored with white violence that they see it as evidence of white superiority or else they try to argue it away as being perpetrated by people who are not truly white.

To those people I have only pity. Love is stronger than hate. I honestly hope that one day you will understand.

18 thoughts on “Why Are Black People So Nonviolent? And Why Aren’t Whites?”